Guest Post: My Open Relationship with Genre by Marshall Moore

Today, I'm delighted to share with you some insight on genre, writing, and the state of so-called gay fiction by Concrete Sky author, Marshall Moore.

Listen to what Marshall has to say: 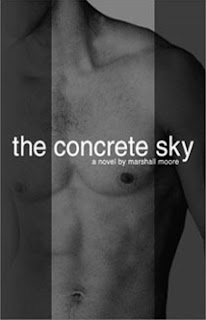 A decade ago, when my first novel The Concrete Sky was published, someone close to the process warned me (off the record) about gay fiction: “It’s like a roach motel. You can check in, but you can’t check out.” The Concrete Sky is very gay, and it is exactly the book that I wanted it to be: it has the style and structure of a thriller (think The Living End meets Thelma and Louise), but underneath the rambunctiousness it’s also a comment on Generation X and the beginnings of the American decline. I had ambitions, and that “roach motel” remark would keep me in a state of vague panic for years afterward.

Sometime later, I was having dinner with the publishers of my second book. That night, I brought up my anxieties about being considered a gay writer, having not yet realized the extent to which I had become a pain in the ass about it. Visibly irritated, one of my publisher friends asked, “What is this gay shame you have?” The question was an interesting slap across the face. I fumbled for the right words, finally saying that shame wasn’t the issue at all, but writing had been my raison d’etre since early childhood, perhaps the main reason I was still drawing breath. I didn’t want to see it co-opted or derailed by limitations associated with genre, any genre. What if I were to write a book not about gay life? Gay publishers wouldn’t want it because it wasn’t gay enough; mainstream ones wouldn’t want it either because of my pink-bookshelf backlist. Where would that leave me?

Another source of discomfort with the label was its implication that I’d be putting myself forward as a gay role model. Although I understand the role-model impulse, I’m not arrogant enough to embrace it. If I have something to offer as such, it’s the fact that I have lived my life openly and on my own terms. Maybe a year after The Concrete Sky was published, a young guy emailed me to thank me for getting him through a bad night. I don’t remember his circumstances, only that he was ready to give up. My book stopped him: it spoke to him and kept him turning the pages; he found a spark of hope and decided not to check out after all. I don’t know how often that kind of thing happens to writers who aren’t gay, and it’s an experience I’ve always been thankful for. Even so, I can’t put the cart before the horse because writing doesn’t work that way for me: I wrote that book in order to tell a story. (I hope that guy will email me again someday to let me know he’s still around.)

A lot has changed. What it means to be gay has evolved: we are individuals, not the Borg. And in the publishing world, now that we are no longer pariahs, and now that self-publishing is a respectable option, many literary barricades have come down. In fact, the concept of genre itself has evolved. Literary fiction is understood to be just another genre, neither the baseline of all writing nor the end-all-be-all, and it has borrowed from what used to be dismissed as genre fiction. There are more options, both in life and in publishing. So if you find it meaningful to call me a gay author or my work gay fiction, go right ahead. Bio:

Marshall Moore is the author of five books: the novels Bitter Orange, The Concrete Sky, and An Ideal for Living, and two short-story collections, The Infernal Republic and Black Shapes in a Darkened Room. He is the founder and publisher at Typhoon Media Ltd in Hong Kong, and he is a PhD student in the creative writing program at Aberystwyth University in Wales. For more information, please visit his website.