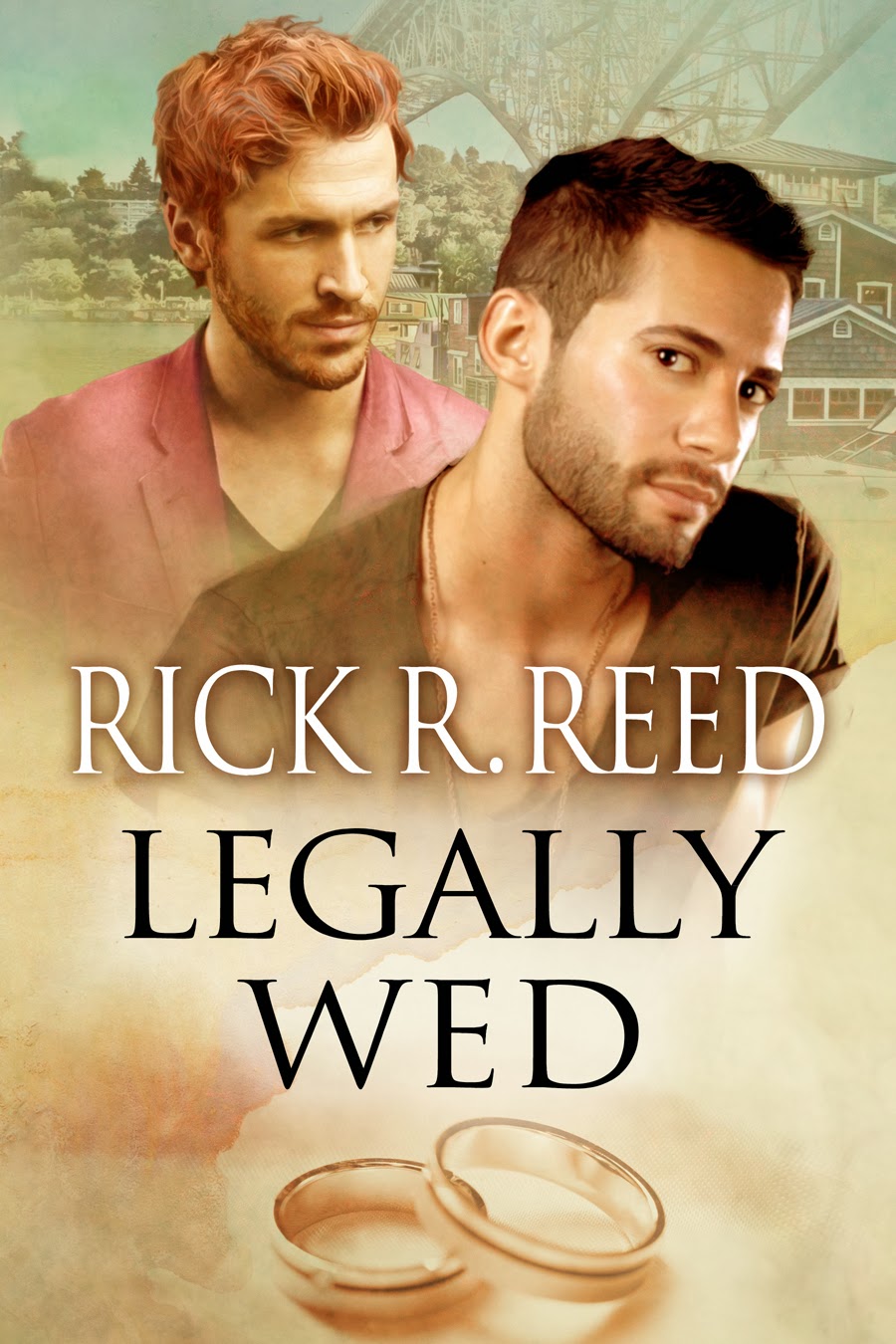 This gets my main character in a whole lot of trouble (as drunken decisions often do), but yet there's a silver lining because maybe this is what leads him to that elusive man he's yet to find to find.... (from Legally Wed)

So, you’re probably sitting there looking at that headline of mine and thinking, “WTF?” Why, you might very reasonably ask, would a gay man seek a straight woman for marriage? Yes, it has been done, but usually by confused people who did not intentionally set out to join their lives in sexual incompatibility.

First off, sister, get the word sexual out of your mind. This ain’t about sex, nor will it ever be. Nosireebob, or nosireejane, or whatever. This is about a marriage of the minds. A marriage, if you will, of the hearts.

Except for in the bedroom, everybody knows that gay men and women get on better than just about any other combo. And if you don’t agree, move along, there’s nothing for you to see here.

So, now that she’s gone, we can talk. Why do I, an avowed homosexual, want to marry a straight woman? Especially when gay marriage is now legal here in Washington?

Number one. Kids. I want ‘em. You want ‘em. And it’s just easier when you make an omelet with and an egg and sperm. Yum! Of course, the mixing would be done in a lab and not in the natural way, which for me, and I do apologize, is out of the question. I haven’t taken the drive up Vaginal Way and I don’t intend to point my Chrysler in that direction anytime soon.

But I think a gay dad and a straight mom could be a kid’s dream parents.

The other reason I want to marry a straight woman is because I love you ladies. I have two sisters, I have a mom, my best friends have always been girlfriends, and not in a campy slang way, either. I confide easier in women. I enjoy being with them—I tend to be more relaxed, more myself.

Why does a marriage have to be about sex, anyway? Don’t those fireworks fade after a while anyway?

What do the good, long-term marriages have in common? It isn’t the old in-and-out.

No, it’s companionship. Respect. Making a family. Wanting to grow old together.

I have just come to the rather stunning conclusion, at the ripe old age of 38, that a marriage, for me, would be better with a woman.

As Mary Magdalene sang in Jesus Christ Superstar: I’ve had so many men before, in very many ways…. Well, me too. And not a one of them has worked out. Maybe you’ve had similar experiences.

So, maybe you and me, we could be a match? I’d look good on your arm, I’m Italian and some other stuff, but the Italian wins out in my coloring (dark), hair (dark), eyes (green), nose (big), and smile, totally warm. If it matters, I’m about 5’11” in pretty good shape, currently tipping the scales at 175. I keep my hair cut short and usually sport a little goatee. I’ve been told I’m cute by many gay guys.

But not cute enough to marry, I guess.

Should we meet up for coffee and find out if this crazy thing just might work?