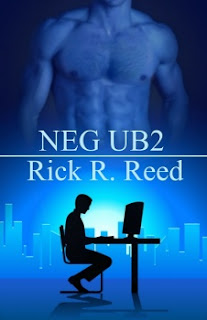 Just a bit of quick education before we begin: VGL means, in Internet lingo, "very good looking" and "neg ub2" means "HIV-negative, you be too." There's a great article about the use of "neg ub2" on online profiles here.

I'm not the only one excited about the upcoming release of my new novella, NEG UB2, coming up on May 10. The sequel to my bestselling romantic comedy VGL Male Seeks Same, NEG UB2 is already generating some buzz.

For example, memoirist and self-proclaimed "positoid," Shawn Decker had this to say about NEB UB2:

“There’s no protection from Reed’s quick wit and and ability to craft a winning and thoroughly enthralling love story.”

If you haven't read Shawn's memoir, My Pet Virus, I urge you to check it out right away. Shawn was diagnosed HIV+ as a child (he's a hemophiliac and caught the bug from a blood transfusion) and his perspective on growing up HIV+ is a fascinating, often funny, and hopeful journey. Shawn is someone who knows first hand that being HIV+ doesn't have to mean tragedy, which is why I so wanted him to be one of the first readers of NEG UB2, which, just like its predecessor, VGL Male Seeks Same, is a light romantic comedy...with a happily ever after.

I thought it was important that people realize a couple things with this novella,

1. The casual cruelty of using a phrase like "neg ub2" in online profiles
2. And that a positive HIV diagnosis does not have to mean that happily ever afters are for other people

I hope you'll check out NEG UB2 when it releases on May 10. You'll laugh, you'll cry, you'll get a little something to think about.

Here's a little synopsis to whet your interest:

The sequel to the bestselling VGL Male Seeks Same!

Poor Ethan Schwartz. He’s just had the most shocking news a gay man can get: he’s been diagnosed HIV positive. Up until today, he thought his life was on a perfect course: he had a job he loved and something else he thought he’d never have: a new man, one whom Ethan thought of as “the one.” The one who would complete him, who would take his life from a lonely existence to a place filled with laughter, hot sex, and romance.

But along with the fateful diagnosis comes another shock: who is this new love? Had Ethan ever really known him? And did he infect him? As Ethan says, his love history had been more of a haiku than an epic and Brian, his new love, seems to the likely culprit is his newfound diagnosis.

The course of true love never runs smoothly, right? And for Ethan and Brian, their new love, once so bright and shining, now appears tinged with darkness and deceit. Can they face this hurdle together with honesty and forgiveness? Or will this revelation tear them apart?

Ethan turns to creating a blog, Off to See the Wizard of Poz to help him deal with his diagnosis and love troubles. And finds there just may be more hope and support in the world than he once believed. And one of his blog readers just might have the key to Ethan’s happily ever after.