DEADLY VISION is Blind to Sexual Orientation...Or Is It? 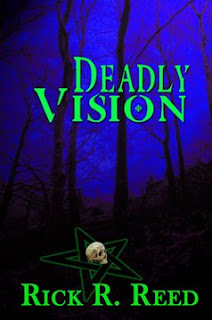 Deadly Vision is a mystery/thriller/dark suspense story with a lesbian heroine. One of the things I get asked is, "Hey, gay boy, what makes you so smart you think you can write about lesbians?" My answer to that is that, in many ways, gay men, lesbian women, straights, transgendered people, and human beings in general have many universal feelings, such as the desire for love and acceptance, and the importance of family.

My main character, Cass D'Angelo, is a lesbian, but she's many other things as well and these are just as important as her sexuality: she is a waitress, she is a single woman living in a small town who has all but given up on meeting a soul mate, and most important, she's a mom to seven-year-old Max. It is this last role that's most important to her. But one day Max goes missing during a terrible thunderstorm. In trying to find her son, Cass nearly gets struck by lightning. Unfortunately, she is right next to the tree that does take the hit and a branch comes crashing down on her head, knocking her unconscious. When she awakens in the hospital the next day, she discovers she was a new--and not entirely welcome--power: she can see into the lives of those around her. And worse, she can see into the grisly fates of a teenage girl who has disappeared in her small western Pennsylvania town; she has fallen prey to a pair of cultish killers.

Cass has her basis in the Cassandra of mythology, who was cursed with the gift of prophecy, only to have no one believe her. When another girl goes missing, Cass tries to use her ability to help the families of the girls find their daughters. Only no one believes her: the police thinks she's a kook, the press wants to sensationalize her, and the killers want to silence her...and quickly discover her vulnerable spot: Max.

When Max is taken by the killers, the plot shifts into high gear and Cass meets a local reporter, a woman named Dani Westwood. At first, Cass is wary: thinking the reporter only wants to use Cass to make a name for herself. When she realizes Dani is her ally, the two begin a suspenseful journey not only to find Max before it's too late, but to use Cass's second sight to offer some relief to the other mothers, who need to know what happened to their own children.

I wrote Deadly Vision to be a tale of dark suspense, to keep readers turning the pages. But I also wrote it to be a story about the bonds mothers and children have...a bond that's universal whether we are gay, lesbian, or straight.