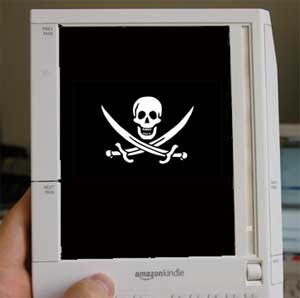 So over the weekend, I get a heads-up e-mail from a fellow author telling me to check into an online site where one of my e-books is being offered up for free downloads. This isn't the first time this has happened and it's extremely aggravating.

Why? Because I earn nothing from this piracy...neither does my publisher, editor, cover artist or anyone else who depends on a funny thing called sales to indulge themselves in silly luxuries like food and a roof over the head.

Sites that offer free downloads of e-books are becoming increasingly common and the numbers of books offered on them is staggering. Lest you think, "hey, times are hard, maybe I should look into these places and download me some free reading matter," consider this:

Unauthorized downloading of e-books is stealing.

Never mind that it's illegal. It's no different than walking into that Borders at the mall and stuffing a bunch of books under your coat and waltzing out the door. And I know no one within the sound of my cyber voice would do such a thing.

So yeah, one big point I'm trying to make is that unauthorized downloads are theft, pure and simple. But it's also theft from many, many authors who can ill afford it. Many e-published authors depend on their royalties to live and every "free" book taken advantage of online makes it harder and harder to do just that. The more one steals, the less a writer--someone who has taken their time, blood, sweat, tears, and imagination to entertain you--makes for his or her work.

So if you have done it before, don't. And if you're contemplating it, please don't.

It's especially aggravating for me because I don't know how to combat this. Sure, I can write each of these sites and scream copyright infringement and they may remove a particular book, but then two more pop up to take its place.

It's gotten to the point where I am not sure if it's worth it to try and battle the pirates. They're like cockroaches, sneaky, dirty, and amazingly fertile.

So what do I do? Stop writing? Devote several hours a day to hunting down and trying to stop those dealing in stolen books?

Or do I just try and be happy that someone out there is reading my stuff, and not think too much about how they got ahold of it? And even more, try not to think about how much in royalties I'm losing because with every download, there goes a potential percentage that should have gone in my pocket?

I don't want to bury my head in the sand. But I also don't want to take time away from what I love--writing--to play Internet cop.

But I don't know what the solution is. I can hope that this little rant will be read by a few people somewhere who might say, "Hey, I'm going to buy my reading material from now on, because stealing it is just bad Karma."

But there has to be a better solution than that, doesn't there?