WIN A FREE COPY of My Newest Release: TRICKS A Love Story 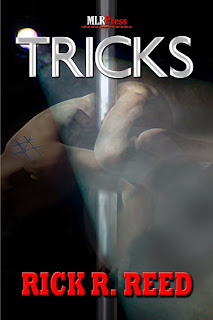 Congratulations to Ike, who was randomly selected to win the signed copy of TRICKS. Ike, I will be in touch for mailing information. Hope you enjoy the book!
My latest novel is now available. Read to the end to find out how you can win your own free, signed copy of Tricks, delivered right to your door personally...by me...in a leather jock strap. Well, that last part isn't true, but I do ship first class.

This book is different.

Yes, boys and girls, this is my first full-length gay romance, an endearing little opposites-attract tale about a male stripper in a sleazy gay bar in Chicago's Boystown and the nerd who falls for him. Those of you in Chicago might recognize the bar that inspired me.

"What are you? Getting soft? A love story...really?" You might be wondering. Well, Tricks does have my own distinctive and dark touches, so I hope you'll give the book a chance and see how I make a gay love story wholly my own.

Here's the synopsis from the back cover:
Tricks can mean many things: sex partners, deceptions, even magic. In Rick R. Reed searing love story, it means all three.

Arliss is a gorgeous young dancer at Tricks, the hottest club in Chicago's Boystown. Sean is the classic nerd, out of place in Tricks, but nursing his wounds from a recent break-up. When the two spy each other, magic blooms.

And here's a little taste:
Arliss had everything he needed right in front of him for that night's performance-hardhat, check, steel-toed boots, check, tool belt, check, black mesh thong with pouch for his rather prodigious endowment, big check. Yes, Arliss was just about ready for his turn on the stage at Tricks, located in Chicago's infamous Boystown neighborhood, at its epicenter on the corner of Belmont and Halsted. He also had before him a tall tumbler of Stoli vodka with just a whisper of cranberry juice cocktail in it for color, and a half-empty pack of Marlboro Ultralights. The latter two items helped the twenty-one-year-old calm himself before a performance, and the vodka in particular went a long way toward reducing backstage jitters.

He lit up a cigarette and regarded himself through the smoke. The lights in the crowded dressing room, which he shared with the other eight or so exotic dancers, were unforgiving. Fluorescent did little to hide any imperfections like rings under the eyes, reddened noses from too much partying, and, for those on their way out of the club, track marks on the arms. But Arliss didn't have to worry about signs of drug abuse showing up on his person. He had learned to just say no a long time ago, in a manner that he preferred not to dredge up, at least not now, when he was trying to put himself in a cheerful, high-energy mode.

The face that looked back at him was young, handsome, and vital. Arliss had a shock of white blond hair that stuck up in a manner reminiscent of rocker Billy Idol back in his glory days, before Arliss was even born. Both ears sported piercings-from one a single razor blade, cast in sterling, dangled; from the other, three hoops crawled up the side of his ear, growing smaller as they ascended. Arliss had full lips, sharp cheekbones, a cleft in his chin, and the most piercing ice blue eyes in the Midwest (or so he had been told). The only thing that marred his nearly perfect face was a gap between his front teeth, which he comforted himself by saying that the space gave him character. Cigarette clenched between his teeth, he struggled into his costume, ending by stuffing his dick into the pouch that protruded from his black thong. His member stuck out in such a way that invited grasping hands, which is what Arliss wanted, as long as there was cash in those hands to stuff the thong even more fully.

Attired in a costume that would make the construction worker from the Village People look demure, Arliss turned in front of the mirror to ensure he was the perfect fantasy specimen of pornographic machismo. He was grateful he had added the angel wing tattoo to his back and the snakes that twisted around each bicep. And the one on his chest, the tiny heart with the name "Helena" in it, always brought a lump to his throat-or a splash of bile to the back of it, depending on his mood and how forgiving he felt.

But now was not the time for being sentimental! Arliss was glad for the tattoos because they added a bit of manliness to his six-foot-two inch frame that held only 160 pounds in weight. He was what the older men at Tricks referred to as a twink and, thankfully, was a desirable commodity in some circles.
He set the cigarette down in a tin ashtray and took a swig of vodka. He could feel as much as hear the heavy bass of the techno music playing in the bar and knew that Antonio, a Puerto Rican dude with a shaved head and heavy stubble, was probably just about finished with his set, which meant his boxing ensemble cluttered the small stage.

Arliss would come out, dance briefly and flirtatiously with Antonio, and then have the stage to himself. He didn't know how he did it, night after night, but somehow he managed. He had always been the shyest boy in Ruskin, Florida, where he had grown up. If they could see me now... Well, if they could see me now, they'd probably still call me a fag and try to beat the crap out of me. Once again, my dear, now is not the time for sentimentality. He took another swig of vodka, draining the glass and feeling the warmth of the liquor as it spread through his chest and extremities. Show time!

Arliss hurried to the door that separated the cramped dressing room from the bar proper. Tricks didn't really have a stage, although the dancers liked to think of the bar upon which they danced as one. It was Friday night and, from the burble of conversation beneath the pounding beat, sounded as though they had a good crowd. He sucked in a breath, looked down at his perfectly smooth pale skin and six-pack abs and told himself he was gorgeous.

"Don't forget to smile, Toots! You always look like some gloomy Gus out there!" Leave it to Emmett Myers, owner of Tricks and Arliss' boss, to try and unsettle him just before he went on stage.

Arliss flashed the man a big, Farrah Fawcett smile. If the prissy older man with the pencil moustache recognized it as fake, he gave no indication.

"There! That's what they like to see! For heaven's sakes, you have to remember that if they think you're having a good time, they'll have a good time. And a good time means more money for all of us."

Arliss listened as the song wound down, morphing into yet another bass beat that signaled him it was time to stride out through the door, amble across the crowded room, ignore the covert feels and pinches he got as he made his way to the bar, and climb up on it to join Antonio in front of the crowd.

This moment, just before he went out, was always almost surreal. He felt as though he became someone else when he opened that door, or more properly, that his everyday world changed when he opened it. It was kind of like when Dorothy opened the door when she touched down in Oz and saw the color-filled Munchkinland, but instead of munchkins, his world was populated with bitter old queens, alcoholics, and trolls trying to put some oomph into their libidos by staring at boys young enough to be their sons.

"Get out there, gorgeous! Shake your groove thing!" Emmett cackled and placed a hand on Arliss' back to propel him forward. Just as much to get the hand off his back as to get to the stage, Arliss threw open the door, plastered on a big smile, threw his shoulders back and strode through the crowd, keeping his eye on the narrow strip of bar that would, for the next fifteen minutes, be his stage.


And yes, here is how you can win a copy in three easy steps:
1. Leave a comment, along with an e-mail address so I can get in touch with you if you win.
2. Help me spread the word about Tricks. Retweet or post news of Tricks and today's blog on your Twitter or Facebook account or just drop your reader friends an e-mail about it. This part is honor system but I will be spot checking.
3. Subscribe to this blog, using the link on the right.

Note: To enter the contest, you must do so at my official blog at http://rickrreedreality.blogspot.com/
Do not enter on Amazon, Goodreads, or Facebook.

I will announce the winner on Sunday morning.

Don't want to wait? Click on Tricks anywhere in this blog and it will take you to the publisher's website, where you can buy an e-copy direct from them or be linked to Amazon to purchase the paperback. Or buy a Kindle version here.