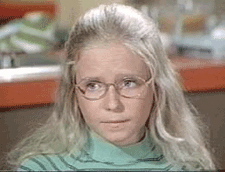 I remember Jan Brady: her middle child quandaries, and her hair. My God, as a little boy back in the 1970s, my greatest secret was that I wanted that hair: Jan Brady’s golden locks, those waist length strands of perfection.

Jan and I had more secrets. We both knew what it was like to be a middle child. We both knew the same cultural touchstones, since we were the exact same age. I wasn’t sure if I wanted to marry Jan Brady, or just be her.

I would find out. A few years ago, I made my first trip to Los Angeles, that fanciful, unreal place presided over by a giant sign built into a hillside (where else but Hollywood would a city so shamelessly call attention to itself?). As I left LAX in my rental car, I expected to check out the muscle at Venice Beach, to find the grave of Marilyn Monroe, to walk down Hollywood Boulevard, to visit Grauman’s Chinese Theatre, and soak in the surreal ambience of the city where creativity, greed, and marketing merged in an uneasy, passionate ménage a trios.

But I never expected to meet Jan Brady.

I stayed in a shameless clothing optional West Hollywood bed and breakfast for several days, and then moved on to the home of a married couple I knew. These friends were struggling actors (you might spy one of them on NYPD Blue as a distressed woman who finds a severed penis at an ATM or on Will and Grace as a wedding shower guest at Grace's apartment). The female half of this couple was interested in the small screen, the male half lusted after the stage, and he did find work…with Jan Brady.

My friend was starring in a play with Jan Brady and Charlene Tilton (of Dallas fame). I got the impression that the play wasn’t much, because I was forbidden to attend. However, around 11 o’clock, the call came. Charlene Tilton was having a cast party at her place; would I like to come?

Hell yes! I imagined Tilton’s mansion, the long line of limousines outside, dropping off Hollywood glitterati.

The thing I learned that night? Hollywood is all about façade. Charlene Tilton lived in a townhouse that looked like something even I could afford. She was making margaritas in the kitchen and was perky.

But it was Jan Brady, now known as Eve Plumb, that I itched to meet. And there she was, in the living room. Gone was the long blonde hair, in its place a mousy light brown bob that looked matronly. She was reserved, giving off a vibe that said “God help you if you mention the Brady Bunch.” We talked about what she was doing the following day: going to a flea market with her husband.

I looked longingly at the patio. Someone out there had just fired up a bowl and I didn’t even look back as I headed out into the California night, lured by the scent of sinsemilla and the prospect of meeting some chick who once played Blondie Bumstead. It doesn’t take long to lose your illusions once you come to Hollywood.

Get 25% off my Dreamspinner publications, including Dignity Takes a Holiday, Homecoming, and Caregiver!

As part of our fifth birthday celebration, all books (including in stock paperbacks) by the authors who signed with us in our fourth year of business will be discounted 25% through midnight on Saturday, May 26.

Check out our home page for links to all their titles! 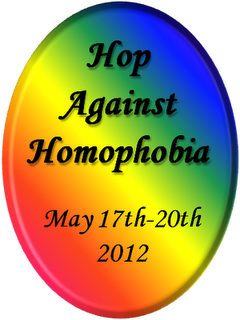 Drum roll please! And the winner of the free e-book copy of Bashed is PaParanormalFan Renee! Renee, I will be in touch via e-mail to see what format you want your copy in. Thanks, everyone, for playing! And thanks for taking a day or two to think about a serious issue.

If you didn't win and still want to read the book that was inspired by the incident below, simply click on Bashed for ordering options.

I'm taking part in the Hop Against Homophobia, an attempt by over 250 GLBT authors, reviewers, and publishers to stand together and create awareness of homophobia. Each participating blog will feature a message on homophobic discrimination in its various forms. Today, May 17th, was chosen in honor of the International Day Against Homophobia and we're hoping to get people more involved with this day by inviting them to our blogs, where the visitors have a chance to win prizes.

My prize is a digital copy of my novel, BASHED, which was inspired by the hate crimes perpetrated on GLBT people all too often (and, nearly, on me--read on). Simply leave a comment below with your e-mail address and I will pick a winner on May 21.

Homophobia comes in many forms, some subtle, some not so much. What inspired me to write Bashed is a real-life incident that happened when I lived in Chicago. Here's my story: 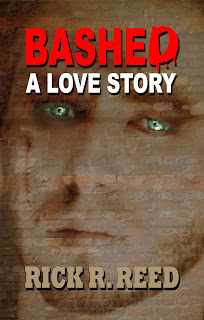 My close call with fag bashing came one October night in Chicago.

I had been hanging out at the Eagle and had stayed late, leaving at close to four in the morning. I had made a new friend and we were making our way to my car, which was parked on a side street that ran parallel to St. Boniface Cemetery. My companion and I weren't thinking about things like hate crimes. But we suddenly were when we noticed an idling old car. The car was a souped-up muscle vehicle and inside were several dark figures, all turning their heads as we approached. Both of us quickened our pace. Even in the middle of a metropolis like Chicago, it was easy to feel vulnerable. And we felt even moreso when the still of the night was broken by the sound of car doors opening.

Suddenly, my friend and I stopped, feeling exposed in our leather, as four young men emerged. They all sported shaved heads and were dressed in baggy jeans and hoodies.

One of them carried an aluminum baseball bat.

They didn't say anything. Their silence was more frightening than if they had hurled epithets our way. To reach my car, we would have to walk by them...and it didn't appear as though they were planning to let us pass. We froze. The four moved closer. One of the guys, the one with the bat, grinned, swinging the bat slightly.

In books, they call what happened next deus ex machina, but at just that moment, one of Chicago's finest rolled down the street, very slowly, toward us. The men got in their cars quickly. And so did we. Thankfully, I do not know what the outcome of that night would have been had not the police come along. But the incident did stick with me until I dramatized the incident as the opening to Bashed. But in my fictional world, no police car came to the rescue. It’s chilling to think that one of your characters could have been you, a you that might not have survived to tell a tale.

To read more from the other authors, publishers, and reviewers participating in the Hop Against Homophobia, visit its main page.