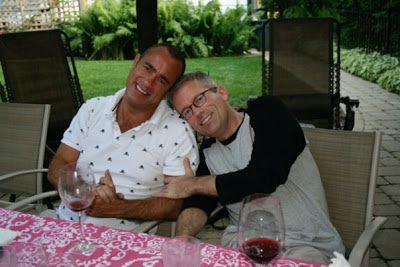 Yesterday was a historic day for four states in the US. Three states (our own Washington, Maryland, and Maine) approved marriage equality at the polls--a clean sweep and the first time in history same-sex marriage in the US has been approved by voters). And Minnesota, while not approving same-sex marriage, REJECTED the possibility of adding a constitutional amendment that would define marriage as between only one man and one woman. Thank God that kindness, fairness, and compassion prevailed in the elections. I see the tide turning.

It was a historic day for my partner, Bruce, and me as well. Although we have been "married" in every sense of the word for the last decade, we have never been able to make it legal anywhere we lived. Now we can... and we're officially engaged--and thinking about wedding dates, rings, and stuff like that.

Honestly, it was a day I never imagined coming.

Behind every marriage is a terribly romantic story of how the couple got engaged, right? For those of you who want to know just how romantic our story was, I will share it with you. Get out the tissues and prepare to have your hearts warmed!

Here's how we got engaged yesterday: Bruce called me from his office. "I'm going to change my status on Facebook to "engaged", is that okay with you? I mean, I assume you'd say yes, but just wanted to be sure."

And we hung up. Kind of gives you chills, right?

But it was romantic--for us--because it was represented a watershed moment in the history of our love. We could finally, finally get engaged to be married and have it be legal. That's huge. And I think it took several hours after that phone call (and literally, and surprisingly, hundreds of congratulatory messages on Facebook, which tickled us to our toes and warmed our hearts completely) for the reality to sink in.

Bruce and I can get married. Legally. It is still hard to believe. See, when I came out, some two decades ago, I never even imagined gay marriage as a possibility. Even as recently as when my son came out to me (ten years ago), I thought I would never dance at his wedding (but I did! in Montreal, three years ago). I accepted the status quo--marriage was not for gay people. We had lovers, or boyfriends, or girlfriends, not husbands and wives.

But things began to change and people--myself included--began to see that everyone should have the civil right to marry the person whom they love. Why would anyone be against that? Love is love.


And I love my Bruce. And I am happy-to-tears that one day soon, I will call him, in every sense of the word, husband.