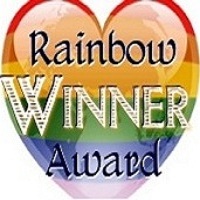 I'm very excited to announce that my novel Caregiver is one of the winners of the William Neale Award for Best Gay Romance in the 2012 Rainbow Awards, sponsored by Elisa Rolle.

I am honored and thrilled to be in the company of such fine authors and books. If you go to the link below and take a look at some of the authors in whose amazing company I find myself, you'll see that the list reads like a role call of some of today's finest writers of romantic gay fiction.

See all the winners here.

This award has special significance for me because Caregiver it represents a connection to two very special men who left a lasting imprint on my life.

The first is the man for whom the award is named, William Neale, a writer of some great romantic gay fiction who passed away all too soon, way before his potential as a foremost author of gay fiction was fulfilled. I am very proud to call Bill my friend and even more proud of the fact that I had the honor of editing his very first two published novels. Working with Bill was a joy, because he was so dedicated to his craft and willing to do whatever it took to make his stories the best that they could be.

The second is the fact that Caregiver is highly autobiographical in that one of its main characters, and the driving force of the novel's other characters learning the importance of loving oneself before one can love others, was my friend, Jim, who became Adam in the book. Everything that happened to Adam happened to Jim in real life, back when I was his AIDS buddy as a volunteer with the Tampa AIDS Network in the early 1990s, when AIDS was truly a death sentence.

Thanks to Elisa Rolle (and the 150 judges of the Rainbow Awards), the tireless advocate of gay romance fiction, who created the awards and oversaw the months of judging and review of nearly 500 entries. In an odd twist of fate, I was fortunate enough to have had lunch with Elisa and Bill Neale both in 2011, at the first GayRomLit Retreat in New Orleans. Little did I know then that Bill would be gone less than a year later.

And thanks to Dreamspinner Press, who took a chance on a book that might have been viewed as too dark and realistic to work as a gay romance, but saw its inner core of redemption and compassion and saw that out of even tragedy can come love and happiness.

But thanks most of all to Jim, my AIDS buddy from more than twenty years ago. It was his big personality and heart that imprinted on my soul, indelibly, and from his story grew my novel, which I think is one of my best. I like to think that Jim knows about Caregiver and knows that its story is his and that he would be proud to see it recognized as it was this past weekend.