LEGALLY WED Has A New Cover...and A New Blurb 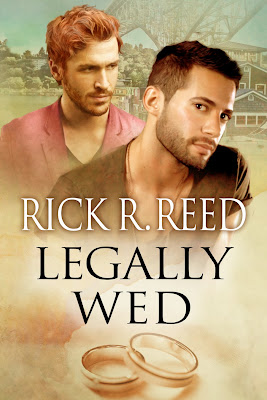 The forces are aligning for the release of my next book, Legally Wed, in January of 2014 from Dreamspinner Press. The cover, by the talented and amazing Anne Cain, has been finalized. The blurb has also been polished and is ready to go. What do you think?

BLURB
Love comes along when you least expect it. That’s what Duncan Taylor’s sister, Scout, tells him. Scout has everything Duncan wants—a happy life with a wonderful husband. Now that Seattle has made gay marriage legal, Duncan knows he can have the same thing. But when he proposes to his boyfriend Tucker, he doesn’t get the answer he hoped for. Tucker’s refusal is another misstep in a long line of failed romances. Despairing, Duncan thinks of all the loving unions in his life—and how every one of them is straight. Maybe he could be happy, if not sexually compatible, with a woman. When zany, gay-man-loving Marilyn Samples waltzes into his life, he thinks he may have found his answer.