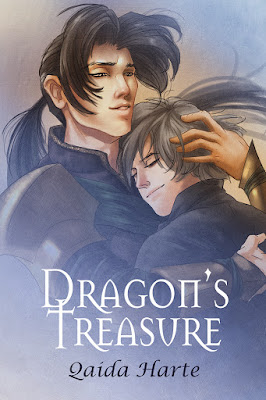 Welcome to my little exploration of love, how people fall in love, what keeps them together, and what keeps them apart. This week, we have Quaida Hart talking about young love and so much more. And please read on to check out her new book, Dragon's Treasure!

It’s a rare thing to find someone at a young age and still be with them several years later. I met the love of my life in middle school, at twelve years old. We were fast friends and became so close as to be the best of friends in school. Middle school passed into high school and we were still close to one another. Teenagers test the waters of love around this time, and Kyle and I were no different. We shared our first kiss at the end of middle school. I remember it clearly. He had been much shorter than me at the time and it was cute, his glasses and braces, my too tall and lanky body. The hall way had been deserted, the day before summer break started. We were both nervous, and the kiss was hardly a kiss at all. A quick peck on the lips and we awkwardly said goodbye.

High school started. A new place, a new adventure. It was a world almost too big for us and our friends, but we made it through all the same. High school drama, silly fights, silly rumors, all the things that belong to a kid who’s growing up and trying to figure it all out still. We were still best friends, even after the kiss in middle school and I have to wonder if he still remembers that awfully awkward press of lips.

We didn’t see each other all that much in our freshmen year, but as we grew and moved into the sophomore year, we found one another again. This time, we began dating. Called each other boyfriend and girlfriend and giggled about it later. We got to know each other on a more personal level. We fought, as couples do, we fell apart once or twice, but we always came back.  And in the midst of it all, we watched as friends and acquaintances ran circles around each other, never staying with one person, always on the move for someone new.

The two of us were the anomaly in the equation. High school sweet hearts don’t make it very long together after graduation and moving into real life. Not many marry their high school sweet heart and keep going. We graduated in 2008 in June and right after his birthday—and before mine—he asked me to marry him in front of my entire family. I will never forget how my mother teased him and told him to say it again because they couldn’t hear him the first time.

We moved in together after graduation and lived in California for six years. He loves me for who I am as a bisexual woman. His father is gay and is married to a wonderful man, and thus Kyle is a supporter of love and equality for all no matter the race or the gender.

We are now in Reno and have been here for a whole year. And after eleven years of being together, we finally got married three weeks ago. Kyle is my best friend in all things. My companion in life, and my lover. He is my rock and the one person who keeps me going.

DRAGON'S TREASURE
College student Ahndrai has the ill fortune of falling into the grasp of an attractive, sadistic vampire. He encounters Eita, a vampire who lusts for Ahndrai's sweet blood and tears apart his world. Eita proves that every myth and legend ever written is only too real, and they are far darker than portrayed in any story.

Ahndrai must face a host of monsters that Eita allows to attack and kill him. Each time Ahndrai dies, Eita revives him so he can continue to feed off him. Ahndrai believes that every creature is as cruel and unforgiving as Eita. Then Nakiirn, a dragon prince, rescues Ahndrai. But even after Ahndrai overcomes his fears and falls in love with Nakiirn, they must both contend with Eita's cruelty again before the vampire succeeds in claiming Ahndrai once more.

ABOUT QAIDA
Qaida Harte is a new author with Dreamspinner, her first publication released December 2015.

Qaida has been writing for most of her life and has always dreamed of being published. Her preferred genres are modern fantasy and erotica. Action and danger are a must in the themes of her projects, as well as that steamy romance to help ease all the heart ache.

She currently resides in the beautiful town of Reno, Nevada with her wonderful husband. Days are spent pounding away on a keyboard with a hot cup of coffee and music blasting. There is an endless amount of characters and dark plots weaving and too little time to get them all done.