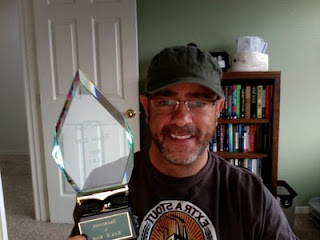 Okay, so I'm sitting here wondering: do I really want to blog about the EPPIE Awards? I mean, I spent all day yesterday shouting from virtual rooftops about my win (Facebook, Twitter, MySpace) and I know there's a wafer thin line between being giddy over success and being obnoxiously self promotional. I really don't want to be the latter. But it's on my to-do list to do a blog about the awards and it's also on my list of ethical things to do to include a list of all the EPPIE winners and to give them my heartiest and most heartfelt congratulations.

For those of you who don't know, the EPPIEs are held annually by EPIC (which stands for the Electronically Published Internet Connection, an international professional organization or authors, editors, publishers, and fans devoted to promoting e-books). Each year, they receive hundreds of entries for the awards (this year I think it was close to 800) and a too-small panel of judges works tirelessly in the months preceding the awards to make their decisions.

This was my first trip to the EPPIEs, which is part of the annual EPICon, a four-day convention that boasts numerous panels from industry experts on writing, publishing, and technology. It's also a fun time to party, make new friends, and renew old ones...especially when it's held in Sin City, otherwise known as Las Vegas. I went on my own and, ever the introvert, was apprehensive: what if no one talks to me? What if I spend four days shut up in my hotel room, feeling ignored? Yeah, I do think like that. But even before I got there, people were already reaching out with offers to pick me up at the airport, dinner get-togethers, and more. The days went by in a desert-sun bleached blur.

And then that same old introvert began telling me there was no chance I would win an award. "Hey," that shy little man who lives inside my head said, "It's an honor just to be nominated. And you were--twice. It would be greedy to expect to win." So, honestly, I didn't really let myself even imagine what it would be like to win.

But the blood pressure did shoot up when they were announcing the nominees for best GLBT novel. And the old BP probably went through the roof when they said the winner was me. I think I was in a mild state of shock as I went up to accept my award, babbling something into the microphone about not having prepared anything to say, since that would jinx me, so I would rely on the words of my idol, Lily Tomlin, and just say: "Thank you all a lot." It was nice that the GLBT category came first because HIGH RISK did not win for mystery/thriller, for which it was a finalist. I already had an award, so I could heartily, and not bitchily, applaud the winner.

So that was my EPPIE experience. They say you always remember your first time. And for an old warhorse like me, getting a first time to remember all over again was like some kind of blessing. 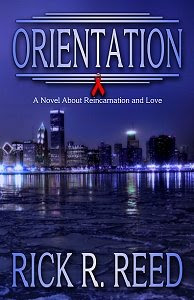 For more about my winning novel, Orientation, go here.
Posted by Rick R. Reed at 8:24 AM