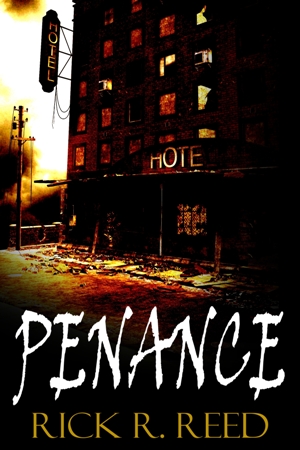 Penance was part of Dell's historic horror line, Abyss, lauded by none other than Stephen King, who called it "remarkable". Here's the original 1993 cover: 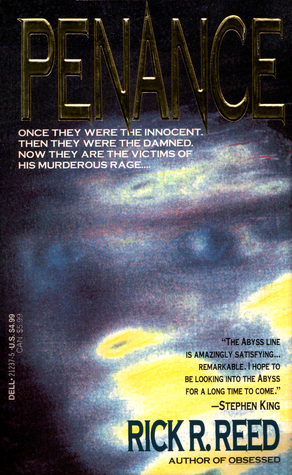 Barely into their teens, without homes, they dwell in neon shadows, the violent eddies of urban America. They trade their innocence for money, abuse their hopes, and then a monster comes...

A monster without fangs or claws, but more deadly. Because of them, he has lost everything: his wife, his family. And he vows to clean the streets of Chicago...for good.

One of the street kids and a man of the cloth form a desperate pact. Together, they will find the madman whose basement has become a chamber of horrors...

Jimmy Fels occupied his street corner. At thirteen, he already knew the poses. There was a casual defiance in the way he leaned against the storefront doorway, pelvis thrust out just enough to attract the interest of the cars cruising by more slowly than the others. He wore a faded jean jacket, Metallica T-shirt, pegged jeans, and Reebok Pumps. His ripped T-shirt deliberately exposed a nipple and a flash of smooth white stomach. The top of the T-shirt was cut away to reveal a gold rope chain, glinting in the glow of the streetlight above him.

Green eyes, wizened beyond their years, stared out of a pale face. He brought a cigarette to his full lips, lips almost too feminine and full for a boy, too ripe for anything clean. His hair, freshly washed, was still damp, looking darker than blond.

He tried not to appear too interested in the cars passing by, some slowing down to take a look at him. He knew it was bad to look too hungry. Make them think you’re doing them a favor…always keep the upper hand. Street knowledge passed on. Remember Gacy. Remember Larry Eyler and what he did to Danny Bridges, the boy who ended up chopped into pieces and thrown into a Dumpster. Get it over with as quickly as possible and keep moving. But he looked anyway, his eyes moving slowly, catching glances out of the corners, and saw the shadows of men leaning forward, their faces ghostly through car windows.

Dwight Morris looked at himself in his bathroom mirror. Forty-two years old, he thought, forty-two years old and you can’t even tell. The Cubs baseball cap was positioned just so, with the bill facing backward. His acid-washed Levi’s jacket hung loosely on him, with the cuffs of the sleeves turned up. Under the jacket, he wore an old grey-hooded sweatshirt unzipped just enough to show the New Kids T-shirt underneath. The mirror didn’t reveal the pegged black jeans and the BK high tops.

Dwight smiled at himself, exposing the boyish gap in his teeth. The hint of rouge on his cheeks made him look flushed; a young boy.

I must look at least twenty-five years younger.

He was cold, but didn’t want to warm himself. That would destroy the pose. The tough guy. So his arms remained at his sides, the cigarette an orange glow in one hand, held between thumb and forefinger. Too many suburban guys tucked at home with wife and kiddies, Indiana Jones on the VCR, lust for his little thirteen-year-old ass on their minds.

“Isn’t it a little cold out here for you, little boy?”

Jimmy jumped at the sound of a girl’s voice. He turned to his left and there she was. Miranda. Tonight she was wearing a black derby, a big black sweatshirt, urban camouflage pants, black leg warmers, army boots. Christ.

An amused grin played about her lips. “Shouldn’t you be home in bed, little boy? I think your mama has some cocoa and Oreos waiting.”

Miranda rolled her eyes. “Slow night?” She took off the black derby she wore and ran her hand through her close-cropped red hair, making it stand on end.

“It is with you standin’ there blockin’ the fuckin’ view.”

Miranda shook her head. “I can see we’re in a mood tonight.” She started away from him, hips sashaying, swinging her bag.

“Hey.” Jimmy took a last drag off his cigarette, flicked it into the gutter.

Miranda stopped and turned, cocked her head. “Thought you didn’t want to be bothered.”

Jimmy raised his hands to her. “See ya later?”

Miranda shrugged. “Depends on how it goes.”

Jimmy watched her walking away. Who would she find tonight? Would she make enough to buy herself a bottle of Cisco?

The man’s voice made Jimmy take his eyes away from Miranda. He pulled a cigarette out of his jacket pocket and lit it, cupping his hand to shield the flame, before he looked up.

It was the creep. At least that’s what Jimmy called him. Some fucking preacher who lived around here. Tall, thin, pasty white with these little old-fashioned wire-rim glasses.

“Beat it. I ain’t interested.” Jimmy sucked in on the cigarette, blew the smoke toward the man.

Jimmy smirked as the preacher walked away, his hands dug deep in his pockets, head hunched down against the Chicago wind whistling down Lawrence, off the lake.

A Toyota pickup pulled over to the curb. Black with neon detailing. The truck had these squiggles of hot pink and turquoise. Jimmy pretended not to notice at first, then glanced in the direction of the truck. There was some young guy inside, wearing a baseball cap backward, leaning over and rolling down the window. Jimmy leaned over to get a better look at the face.

Wait a minute. Jimmy moved a little closer, trying to make it look like he’d just decided he wanted to cross the street or something. But he needed to get a better look.

This guy wasn’t so young. There were lines around his eyes, across his forehead. He had so much makeup on his cheeks he looked like fuckin’ Bozo the Clown..