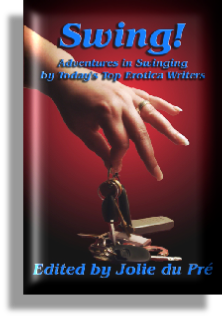 I admit it; I am a complete virgin to this concept of a "blog tour." From what I understand, it's like a book tour, but instead of getting on a bus and going from bookstore to bookstore, you get on the computer and hop from blog to blog to promote a particular book. It's a lot more comfortable for readers and writers alike, and it saves on gas.

I was fortunate enough to be included in a new anthology called SWING! Adventures in Swinging by Today’s Top Erotica Writers, which will be officially released on April 24, 2009. During the month of April, the idea is to visit the blogs/websites of the authors in Swing! and check out each author's response to a set of five provocative questions, posed by Swing! editor Jolie du Pre. Click here for a full list of all the authors and their answers to the following questions.


1. Why do you write erotica and what do you love best about it?
Gee, I don't even know if I write erotica. I write stories about people and, hopefully, those stories take my characters (and my readers, I hope) on a journey. The journey can be a physical one or a more emotional one. I have been trying to figure out just what erotica is and even I'm not sure. All I can say for certain is that erotica has to do with sexuality. And since sexuality does crop up fairly often in my books and stories, I suppose some might label a part of what I write erotica. But the truth is, I'm more interested in finding out what compels people and how they solve problems and that includes in the sexual realm.

2. Tell us about your story in Swing! Adventures in Swinging by Today's Top Erotica Writers and please feel free to give us an excerpt.
My story is called "Initiation." It's a strange story about a man who finds a mysterious ad for a group called the F*ck Club. When he responds to the ad, which is all about joining a group where members engage in anonymous sex, he finds himself getting cryptic directives to pass various tests to see if he is worthy of admission to the club. There is something dark, disturbing, and secretive about the messages. I write horror and while my story for Swing! is very sexy, it's also very dark, and by the end, extremely horrific. Here's a small taste:

I pressed on the door and it opened easily at my touch. It didn’t squeak. These guys think of everything. Someone must have gotten here early and oiled the hinges. I moved inside; the air smelled of metal filings and I swore there was the echo of machinery: wheels turning, generators humming, stuff like that. Something scurried across the floor in front of me. I took a deep breath and continued moving forward, keeping my hand out in front of me for protection in the pitch.

As I moved further ahead, the quality of light changed, becoming more grayish, paler. I wasn’t sure if it was my own eyes adjusting to the darkness or if there was actually a light source up ahead.

I rounded a corner and came into a large open space. Now, I could see. Someone had placed several of those oil Coleman lamps in a circular formation on the floor. The light they cast was weird, shining upward. It all looked menacing, like something out of a horror movie directed by Quentin Tarantino, something of the modern extreme horror genre, like Saw or Hostel. I wanted to laugh. These guys were good.

I found myself growing excited again, especially with what else awaited me in this open space.

In the center of the lights stood a metal frame upon which was suspended a leather sling. That wasn’t the best part. The best part was the half dozen men that stood waiting around the sling. All of them were naked. All of them had nearly identical bodies: packed with solid muscle, ripped and defined.

3. Name some other books where we can find your work.
My tenth novel, Bashed, about a gay hate crime and its aftermath, just came out from MLR Press. My short fiction can be found in more than twenty anthologies...and I'm proud to say that two anthologies that feature my work--Unspeakable Horror and Like a Chinese Tattoo--are both finalists for the prestigious Bram Stoker Award this year, which is the most highly-regarded award in horror literature. News of my past, present, and upcoming publications is all on my website. Or join my Rick R. Reed Book News group on Facebook.

4. What are you working on now?

Right now, I’m working on a book called Mute Witness. It’s a thriller about a little boy’s abduction and how small town minds immediately accuse the boy’s gay father of the crime. And, on May 10, my novella, NEG UB2 will be coming out from Amber Quill Press. I’m excited about that, because, for one, it’s a sequel to my very well received romantic novella, VGL Male Seeks Same and for another, it’s a book that shows a story about a man being diagnosed HIV positive can have a happy ending.