WHY I WRITE By Victor J. Banis 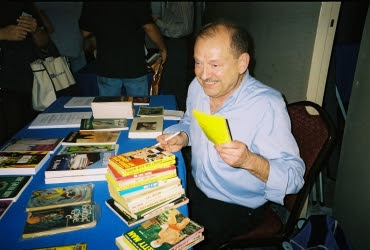 This time around, I am honored to share with you the thoughts of gay icon Victor J. Banis, who is a writer who laid the groundwork for all of us writing gay fiction today. Victor is a friend of mine and someone for whom I have enormous respect. Listen as he tells us why he writes...or maybe not...

Why I Write
By Victor J. Banis

Why do I write? Oh, that's easy, because it's made me fabulously wealthy and a household name. Ha ha ha! Oh, what a card, I thought I'd never….ahem. Okay, let's start over. Well, it has made me a household name, but it's not a household you'd want to visit.

I've spent fifty years or more learning how to write, so there hasn't been a lot of time or energy for figuring out the "why" part of it. I grew up in a dirt poor home but we were all book people, so I started reading when I was four, and we all told one another stories (ideally, ghost stories trying to scare one another) and writing the stories down as I got a bit older just happened naturally. But, here's the funny thing: I did it for years and never gave a thought to seeing them published. I was in my twenties and a friend said, "Why don't you try to sell some of those stories of yours?" What a revelation!

And in due time, that's what I did, and have been doing ever since. But, as I've already said, I didn't give much consideration to the why of it. Not to make money, although from time to time I have, and not to get famous, though in some circles I have been. Mostly it's been a pleasure, but sometimes it's been an enormous pain.

I think, for me, it's just part of every day's routine, like brushing your teeth. It feels "not right" if I skip it. Some days I just putter – emails, blogs, notes to myself. Other days I'm at it all day long. Or, I hop up and down. I work for an hour or so, and then do something else, and then an idea pops into my head and it's back to the keyboard. And I can get those ideas anywhere and everywhere – sometimes at the most inconvenient times. I have actually been making whoopee with someone and had this killer bit of dialogue slip into my head. Talk about losing your focus! Because, I have to keep going over and over it in my mind to make sure it gets planted in my long-term memory, and meanwhile, other things are getting neglected. There might be a clue there as to why I am single.

Victor J. Banis is a writer. He is also a lecturer, writing teacher, and early rabble rouser for gay rights and freedom of the press, He is the critically acclaimed ("the master's touch in storytelling" Publishers Weekly) author of more than 150 published books and numerous shorter pieces in a career spanning nearly 50 years. A native of Ohio and longtime Californian, he lives and writes now in West Virginia's beautiful Blue Ridge. Visit his website.