Let Him In! Sluggo Snares a Vampire 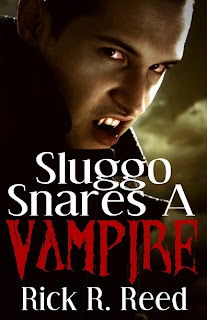 So my latest release from Amber Allure is now out, with the usual terrific cover from Trace Edward Zaber. Sluggo Snares a Vampire is an ebook short about one very frightening night in the life of a mousy gay man who spends far too much time online...and far too much time enmeshed in the traditions of horror cinema.

Yet, when he runs across a sexy, enigmatic, and deadly vampire in a chat room, he forgets about one of the main cardinal rules of vampires: they can't come in unless you invite them.

Such a simple rule! And such consequences if one forgets!

Synopsis
When Sluggo cruised online chat rooms, he wasn’t looking for a hook-up; he was looking for love. But love has a way of being elusive, especially when you’re not being honest. Presenting himself as “Sir Raven,” Sluggo promises his chat room cohorts he is the “master of the night.”

And then he meets someone who challenges him—someone who claims the title, “master of the night” as his own. TepesAllure’s enigmatic and flirtatious messages to Sluggo start out as fun banter, but quickly turn to eerie disquiet.

How does TepesAllure know so much about Sluggo life? How can he know—without even a picture to go on—what Sluggo looks like? And what’s all this about an age numbering in the centuries and a curious taste for blood?

Has Sluggo snared a vampire? Or has the vampire snared him? As the night unfolds, so do the advances of TepesAllure…and even when Sluggo tries to escape, he finds that getting out is not nearly as easy as getting in.

But to make their online connection real, TepesAllure needs Sluggo to invite him in. Will Sluggo succumb to Tepes’ allure? And will the man of his dreams turn out to be a nightmare?

…Sluggo’s realized suddenly how easy it had been to sucker in these online men who found themselves one hand between their legs while the other caressed the keyboard, as Sluggo played up to their fantasies, becoming God’s gift to homos and the devil’s Tantalus to straight women. He wanted to believe it was some strange and evilly alluring Brad Pitt at the other end of their electronic connection. But what was this strange business about being centuries old?
He typed: “Methinks you’re a little too enraptured with horror cinema.”
“Horror cinema has got nothing on me, my little bespectacled piglet. Horror cinema has managed to get so few of my traditions right as to be truly laughable. But there has been one tradition, rule if you will, they’ve always succeeded in getting correct.”
Sluggo rubbed his arms. There seemed to be a sudden, odd chill in the room. He glanced at the window and saw the black night pressing against it, almost as if it was something solid and alive. He shook his head, realizing he was being silly, and made a note to check the thermostat. He returned to the keyboard, wondering about the “horror movie tradition” Tepes had mentioned. “And what would that be?”
“I can’t tell you that.”
Sluggo rolled his eyes. Of course, you can’t. That’s because there is no such tradition. “You’re quite the mystery man, aren’t you?”
“You couldn’t even begin to guess.”
Suddenly, Sluggo’s spine stiffened as another shiver washed over him…
Buy Sluggo Snares a Vampire.