Why Do I Write?
By Jesse Fox

Most people will admit life isn’t easy and we all have ways of dealing with the daily stresses. I began writing at eighteen when I went out on my own, mostly bad poetry, and for me it was cathartic. Simply a way to deal with those stresses both past and present.


As I grew older though I realized it was an innate part of who I was and not just a poor excuse for a therapist. Writing for me became as important as eating, drinking, sleeping, or breathing. Without its presence, I felt empty, lost, and adrift in a world that at times seemed to misunderstand who I was. I spent twelve years working to improve as a writer and always the dream to become a published author lurked in the back of my mind. During those twelve years, I came to realize that I had something to offer the world as I began receiving e-mails from people who asked me numerous times why I wasn’t doing this for a living.

When I started out on this journey though, it was in the world of fandom, and I nearly stopped before I even started simply because I was feeling sorry for myself. One person though saved me from my own stupidity all those years ago. What she offered was the greatest gift, in my opinion, that a writer can receive.

It was December 23, 1999 and while sitting in front of my computer, I bemoaned the fact that no one seemed interested in my writing. Opening my e-mail, I noted one with the title of the story I’d slaved over for six months as the subject line. Curious I opened and read the letter from a girl in Chile. Her English although decent was broken, but what caught my attention was the emotion.

Sam, as I came to know her, stated she’d been depressed and on the verge of suicide when she found my story. After reading the first chapter, she was mesmerized and discovered herself waiting in excitement for the next. With each chapter read, the realization that she no longer felt alone nor depressed came over her, but she was still too nervous to comment on it. By the time she’d read the final chapter Sam, who was just about to start college, knew what she wanted to do with her life. She wanted to touch people with creativity as I had done with her.

Suffice to say I cried like a baby. It took me two days to find the words I needed not only to express my thanks but also to invite her to continue our correspondence. We became fast friends for a number of years and although I no longer speak to her on a regular basis (we’ve went our separate ways), I will never forget her.

I write because I know that my words can touch the hearts and souls of those who care to read them. 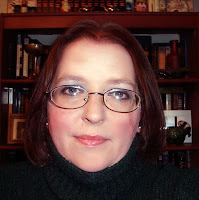 Bio
Jesse Fox is the pseudonym of a St. Louis based writer of dark gay erotic-romance. Born in the foothills of the Ozarks, she relocated to St. Louis in 1986. In the spring of 2008, she became one of four authors to launch Dark Roast Press out of Chicago. Visit her blog.