From time to time, I like to share with you exciting new works from fellow authors. Today, that work is: 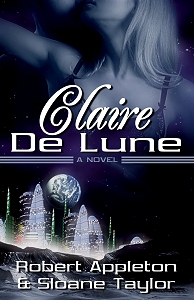 CLAIRE DE LUNE
By Robert Appleton & Sloane Taylor
ISBN-13: 978-1-61124-011-5 (Electronic) ISBN-13: 978-1-61124-995-8 (Print)
Amber Quill Press – Amber Heat
Genres: Science Fiction / Futuristic / Action / Adventure / Mystery / Detective / Voyeurism Heat Level: 2 Length: Novel (70k word)
Buy your copy.
BLURB:
You’re invited to the galaxy’s most prestigious beauty pageant. Clothing optional. Romance and danger…fully provided…
Cocky young detectives Gerry Rappeneau and Sebastian Thorpe-Campbell arrive at the premier lunar resort expecting a week of eye candy and long massages. With a half-billion-credit purse up for grabs, this year’s pageant is the focus of a hundred worlds. And beauty isn’t the only thing in the eye of the beholder.
One contestant, Evelyn Lyons, is attacked and her assailant killed. Surely a simple case of a stalker gone mad, as nothing bad ever happens at the Selene contest. So the brochure says.
The closer Gerry gets to Evelyn, the more he is convinced she’s hiding something. His meticulous character sparks with her wild, sassy nature, and they embark on a torrid affair. Their forbidden romance isn’t the only thing set to ignite in Pont de Reves.
Sebastian’s infatuation with demure Claire Villiers, another contestant, threatens to put all four of them in harm’s way.
A deadly trail of corporate conspiracy, monstrous assassins and hot bikini wax is more than anyone bargained for in this incendiary erotic mystery. Get ready for some serious heat on the dark side of the moon.
EXCERPT:
…Evelyn glared across at Van der Sands, her grey eyes metallic and sharp. Busy placing the new drinks order, the banker didn’t notice her.
“He’s a son of a bitch.” Evelyn retrieved a white business card and a ballpoint pen from her purse. She wrote on the back and slid it to Gerry.
He swallowed hard as he read, Clean the bastard out & I’ll sleep with you tonight.
She let her hands fall loose at her side, unmasking her face. Gerry’s first thought was one of easy acquiescence. Whatever she wanted! If this was the start of some kind of saucy foreplay, why the hell not? Then he watched the curious game within the game unfold.
A few slow-burning fireworks started the show. Sly glances between her and Van der Sands; the brunette girl with fleeting yet repeated eye contact; Evelyn whistling a tune. Subtle—but the shared air was definitely combustible. What was going on among the three of them? And what did she have against her old boss?
He slipped the card into his pocket. The drinks arrived and Van der Sands made sure everyone was ready to resume. “Le jeux est fait. Un banco de quatre cent mille.”
The CEO wasn’t messing around. High stakes, just like the previous round. Gerry might have backed off—four hundred thousand was two fifths of his total allowance for the night—but Evelyn’s note and the bizarre charades had already piqued his interest. “Banco,” he announced.
Van der Sands dealt him two quick cards and a lengthy, probing stare. Gerry matched the latter. At first the man had seemed indifferent, almost petty about the game of baccarat. Now there was fiery curiosity in his eyes, as though he needed to know who this blond opponent was and why Gerry was in league with her. He thought of it as dick-measuring by proxy. Neither man knew the other, but they had become tacit rivals by association with the same beautiful woman.
A seven and a two—a natural nine. A great first hand. Gerry tapped his cards, signifying he didn’t want another. Van der Sands would now have to err on the side of risk.
He drew a nine and a five. A score of four. To get close to nine, he had to risk another card.
The croupier flipped an ace. “Cinq a la banque.”
Gerry nudged Evelyn’s arm before arrogantly tossing his cards face up into the center.
“Monsieur Rappeneau wins.” The croupier retrieved the cards and awarded Gerry his chips.
The brunette congratulated him with an approving nod and a silent clap. Her black elbow-length gloves added to her mystique. Evelyn, boasting a mischievous grin, stroked his thigh under the table, edging dangerously close to his dick. His next sip of Mackison competed with a gasp. He covered his mouth. It was all he could do to stop a mouthful of beverage showering the green baize. Evelyn’s hand had strayed into sensitive territory. He didn’t know whether to yank it away or shove it deeper into his crotch.
“Keep it up,” she whispered in his ear. “And that goes for your winnings, too. Tonight, I’m gonna screw your brains out.”
Jesus Christ! His hold on propriety slipped like an eel through soapy rubber gloves. The casino grew close. Stifling. Evelyn grabbed his crotch and massaged the tip of his erection. He gave another gasp. The brunette watched him through the prism of her glass while she sipped her Malibu. The way those sensuous black gloves contrasted with her white arms and shoulders… Oh, God! He glanced down at Evelyn’s breathtaking tits. His hand shaking, he took a large swig of Mackison. It helped. Only for a moment. Evelyn moved in close and placed her hand on his shoulder. She gave him a look so serious and seductive he felt his erotic self tumbling into her cleavage. Somebody…help.
“Un banco de trois cent mille.”
The Australian answered, “Banco.”
Gerry wrenched himself to his feet. He regained the wherewithal to kiss Evelyn’s cheek before stuttering, “Excuse me. Shan’t be a minute,” to the other startled players. Breathing a long, shivery sigh on his way to the restroom, he tripped on a step and almost bulldozed a waitress into her trolley of snacks.
“Good God.” He locked the men’s room door behind him. “She’s an animal. I’m dating a goddamn wild animal…”