Sample 60 Saturday: IN THE BLOOD 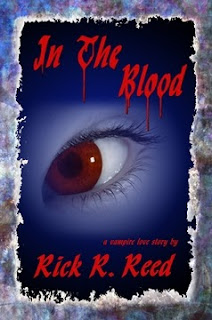 Let's continue the chronological tour and delve into my vampire love triangle story, In the Blood

Synopsis
What Would You Give Up for Immortal Life and Love?
By day, Elise draws and paints, spilling out the horrific visions of her tortured mind. By night, she walks the streets, selling her body to the highest bidder.

And then they come into her life: a trio of impossibly beautiful vampires: Terence, Maria, and Edward. When they encounter Elise, they set an explosive triangle in motion. Terence wants to drain her blood. Maria just wants Elise . . . as lover and partner through eternity. And Edward, the most recently-converted, wants to prevent her from making the same mistake he made as a young abstract expressionist artist in 1950s Greenwich Village: sacrificing his artistic vision for immortal life. He is the only one of them still human enough to realize what an unholy trade this is.

is a novel that will grip you in a vise of suspense that won't let go, forcing you to stay up long past midnight, turning page after page, until the very last moment, when a surprising turn of events changes everything and demonstrates, truly, what love and sacrifice are all about.

...swilling bum who wandered into this empty station seeking shelter from a storm…
“Trust me, Edward. There’s someone you should meet.”
The drug he had smoked clouded his brain. He had already forgotten what he had asked. His mind pondered another question: if this was truly an abandoned station, how could they have gotten in? Wouldn’t such a place be locked and barricaded against the public?
But that question, too, vanished into a hemp haze.
Mutely, he followed Terence to the end of the platform. It was even darker there, but the darkness was fragmented by a sharp line of yellow light, glowing underneath what looked like two huge metal doors.
“What’s behind the doors?” Edward felt a sharp stab of fear. It caused his heart to beat faster and made his face grow slick with sweat. He noticed for the first time the musty air that smelled mildewed, as if hadn’t been disturbed by anything living in years. To defy him, a rat the size of a small dog scampered across the platform before him and disappeared into a tunnel. “I don’t like this,” Edward said, reverting to a child. “I want to go home.”
Terence presented him with his most seductive smile, the tiny, pearlescent teeth almost glowing. “But, darling, we’ve come this far. And Maria is expecting us.”
“Maria?”
Terence stooped and his hands moved near the bottom of the door. There was a click. Terence stood and rubbed his hands together, then wedged a fingertip into the slim line separating the doors, which swung open, releasing the very essence of dankness and a pale lemony light from a wall-mounted lamp, which after the gloom Edward had grown accustomed to, was nearly blinding.
The two men stood at the top of a wide flight of stairs. They descended into blackness. Edward shivered. He could not see where the stairs ended.
A strain of music floated up the stairs. Edward cocked his head. Was it Vivaldi?
Terence put his arm around him, urging him to the first step. “There’s another station below this one.”
“And what’s down there?” Edward reluctantly let his feet descend two steps.
“Maria. And our home. I’ve visited your home. It’s only gracious that I have you to mine.”
Edward swallowed hard and let Terence guide him into the pitch…
Buy the print version of In the Blood

. Note: A new e-book version, titled Blood Sacrifice, will be out next year from Untreed Reads.