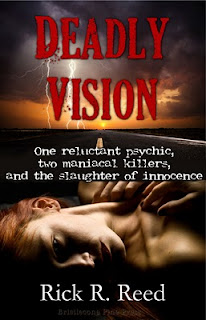 Synopsis
What If You Suddenly Became Psychic and Could Stop Two Cold-Blooded Killers?

What if...No One Believed You?

Small-town single mom Cass D'Angelo's life changes when a thunderstorm sweeps into her small Ohio River town. Cass must venture out in it to hunt for her son, seven-year-old Max. Lightning strikes a tree near her and a branch to the head knocks her unconscious. When Cass awakens a couple days later, she sees into the deepest secrets of those around her. Worse, some teenage girls have gone missing, and Cass sees their grisly fates. The discovery opens the door to a whole new life. The police are suspicious. The press wants to make her a celebrity. And the killers are desperate to know how she found their carefully concealed grave. Cass finds an ally in Dani Westwood, a local reporter. The two women begin to probe into the disappearances/murders and start to forge a romance. When Cass's little boy, Max, disappears, Cass must race against the clock to find him...before it's too late.


“THIS ISN’T WHAT I ordered!” the old woman called out, the irritation in her little old lady voice heightening her pitch, making her sound like a harpy. “Miss! Miss, I didn’t order a grilled cheese. I ordered a...”
Cass hurried over to her table, hoping her boss, that prince among men, Mike Bailey, didn’t hear the old lady’s cries. “Ma’am, I’m very sorry.” Cass picked up the plate. “Now, what was it you had?”
“I shouldn’t have to tell you again, young lady. I already placed my order. You wrote it down.” The old woman toyed with the paper napkin on the table, not giving Cass the benefit of eye contact. She said, in a much softer voice, “You figure it out.”
Cass consulted her pad and went back to the kitchen. The old bitch’s tuna melt was, fortunately, still waiting under the heat lamps. But who got the grilled cheese?
Cass hurried over to the woman and set the plate before her. “Listen, ma’am, I’m very sorry.”
“Mmm-hmmm.” The old woman lifted a slice of bread to peer at the tuna and American cheese underneath. “Don’t worry. It’ll come out of your tip.”
“You do what you have to.” Cass sighed and hurried away. She glanced up at the clock for what seemed like the fiftieth time tonight. It was ten o’clock, one more hour until the end of her shift. Cass’s feet ached. Worse, she was still stinging from her visit to the McKennas’. How could they have been so cruel? She had only been trying to help.
The frustration simmered just beneath the surface of her consciousness, a consciousness she needed to devote to her work, however menial it seemed in comparison to what she knew. Sheryl McKenna, she was certain, had been buried on a hilltop, somewhere overlooking the river. She wished there was something she could have done before that fact became reality. And, God, how she wished she could have convinced Janet McKenna to listen. Cass was certain that just knowing what happened to her daughter would give the other woman some closure, a release. At least that’s what would have been true for Cass had she been in the other woman’s shoes.
This line of thinking led Cass to wonder how Max was doing.
Buy Deadly Vision

in paperback or ebook.