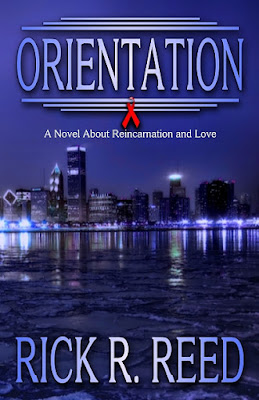 Every Thursday, I use this blog to highlight a title from my list of books already out there that you might have missed. This week, I'm throwing back to my very touching and complex love story that encompasses reincarnation, love across the years--and lifetimes, and a touch of the paranormal. JesseWave Reviews said of ORIENTATION:


"...The book is a gem and you won't find characters like these anywhere else...I stayed up all night to find out what would happen when the worlds in his story collided...if you're looking for an intricate plot and multifaceted characters who bring an array of complex human emotions to their story, then look no further..."

BLURB
Christmas, 1983: A young man, Robert, tends to his soul mate, Keith, who is dying from AIDS. Robert tries valiantly to make this a special Christmas for his lover, but loses the fight late Christmas night.

...Robert moved a little closer, cautiously. Another step, then another. He stood at the edge of the boulders, uncertain if he should step up on them. He could slip and easily fall—the crashing surf had coated the stones with a sheen of ice. And then he would be the one plunging into the icy water, not her. But worse was the fear that had already occurred to him—sudden movement might be just the impetus she needed to propel herself off the stone and into the freezing black embrace of the water.

He cleared his throat, stalling for time and trying to think of something to say. “You know, I’ve heard that death by drowning and hypothermia are miserable ways to go. Painful. Suffocating. At least scoot yourself back up here and come home with me. I’ve got a medicine cabinet full of sleeping pills. You could take the whole bottle. Picture yourself lying on clean sheets in a toasty warm room, maybe with some of your favorite music playing. I could open a bottle of good wine for you. Then you could drift off in comfort. Why inflict any more pain on yourself? I know I wouldn’t.”

The girl stared at him. He could see the uncertainty in her eyes and took the opportunity to carefully ascend the boulders until he was standing above her, not three feet away.

The girl barked out a brief laugh, mirthless. “Who are you? The suicide fairy?”

Robert sat on the boulders and let his legs stretch out close to her. “Fairy…yes. But I really have a dislike for suicide. It’s for quitters. If there’s one thing I’ve learned over the years, it’s that we never know what’s going to happen next. And that applies to the good as well as the bad. You’re young. Why cut yourself off from the possibilities that are out there, waiting for you?”

“So much for your medicine cabinet full of pills.”

“Well, I’ve seen too much death and too much pain. I know what you’re thinking of isn’t an answer. An escape, maybe, but not an answer.”

The girl scooted up next to him. In the dim light, Robert could make out a pug nose and freckles, bow-shaped lips. This was a pretty one. She couldn’t have been more than twenty-three or so. He cocked his head. “Would you mind if I slid my arm around you? It’s so cold.”

She smiled and shook her head. “You’re not gonna give up, are you?”

Robert took her question as a “yes” and pulled her in close to him, sheltering her as best he could from the wind and freezing spray. “If you mean, am I going to walk away from here and leave you alone, the answer is no. I couldn’t do that. I don’t have it in me. I’m all for personal freedom, but this is one I’d have to block.”

She leaned into him, burying her head in his chest, and let out a muffled sob. Robert reached up to touch her spiky hair. She sniffed and blew out a big breath, pulling back from him. “Fuck. I can’t even kill myself.” She used his coat to pull herself up to a standing position and looked down at him. “You know, this is a stopgap. You can’t stay with me forever. Once you get me out of here, I can do it again. And yes, I’m gonna let you get me out of here.”

“Promise me you’ll do it with a little more elegance…a little more style.” Robert looked up at her and smiled. “Those things are all we have to separate us from the beasts. Might I suggest a warm bath, a sharp razor, and the strains of “Con onor muore” from Madama Butterfly?”

She shook her head. “I do believe you’re more nuts than I am.”

“That could well be, that could very well be...”