Throwback Thursday: OUT ON THE NET 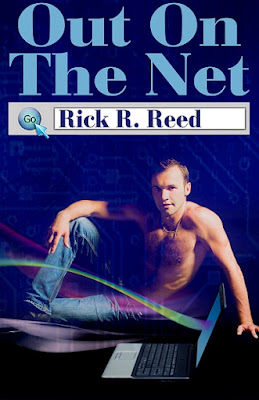 Every Thursday, I plan on using this blog to highlight a title from my list of books already out there that you might have missed. This week, I'm throwing back to my very funny coming out story--told in blog form, OUT ON THE NET. Indie Reviews said of OUT ON THE NET:

"...a laugh out loud romantic comedy that is interspersed with touching moments and tells the story of a man who decides to open the door of his closet and step out of it on his wedding day..."


BLURB
Ray Tolliver has bad timing. Cold feet? It doesn't get much worse than accepting you're gay twenty minutes before your wedding to a woman, yet that's just what happens.
Join Ray as he recounts in his blog the hilarious and touching events that lead him on a journey toward true love. Although he originally starts looking for love in all the wrong places, will he eventually find another man who wants more than just quick sex? A man who appreciates romance, hearts, and flowers? Or will he find that self-acceptance and bliss do not always go hand-in-hand?

And what of Alice, Ray's lovely, jilted fiancée? Will she find it in her heart to forgive the man who left her at the altar?

These questions and more are answered in this unique love story, told in the form of blog entries. You'll laugh, you'll cry, but you'll come away with a renewed appreciation for the power and difficulties of loving not only others, but yourself...

I knew, accepted, whatever…that I was gay when I was standing in the little room just off the altar at St. Alfonso Catholic Church in Summitville, PA at approximately 12:30 P.M. on a hot and humid July afternoon. I was wearing a white tuxedo jacket, white shirt, black tie and cummerbund, and black tuxedo slacks. My black patent leather shoes were buffed to a high gloss. My dark brown hair had just been cut and not a single strand was out of place. I could hear the soft talking and laughter of those who had assembled in the church as they waited for the proceedings to begin. A string quartet played Beethoven’s “Ode to Joy” so gorgeously it brought tears to my eyes.

I was thirty years old and about to be married for the first time.

The ceremony was due to begin in twenty minutes.

That’s the moment I realized, accepted, knew for sure, that I was gay. I’d like to say it came to me in a flashing moment of clarity, like some blinding white light. Or that I fainted straight away, hitting the marble floor with a thud. Or that a chorus of angels came down from on high to reveal to me this alarming news in celestial tones.

My best man, Doug Taylor, primped in the mirror. He had no reason to primp. His reddish blond hair, freckles, and blue eyes were already the lustful design of every female in the wedding party. His body, buff, tight, and ripped, filled out his tux better than I could ever hope to fill out my own.

Doug helped me realize the truth because at that moment—as God, literally, as my witness—I discovered I’d rather be marrying Doug than my bride, Alice, who was, I’m certain, waiting anxiously with her father at the rear of the church. Poor Alice’s anxiety was nothing compared to what it could have been had she known what was going through her groom’s head at this very moment.

Doug turned to me. “Did you say something?” He smiled and I have to tell you, Doug has one of those smiles that light up a room. I also have to tell you that it wasn’t quite true what I said about Doug—I really didn’t want to marry him, but I would prefer that the wedding night be spent in his arms.

Should I make Doug—my old college roommate at Ohio State University and beer-drinking buddy—the first recipient of my revelation?

I didn’t think about it. I knew that, in moments, the anxiety would rise up, the adrenalin would kick in and I would be a mess—a trembling, heart-palpitating, sweating buckets mess. In moments, thoughts like how I was about to hurt Alice, disappoint my parents, stun the wedding guests, and perhaps ruin my life as I knew it would be taking turns tormenting my mind.

But, as I said, I didn’t think about it. Instead, my mouth worked independently of my brain as I said to Doug, “Yeah. Yes, I said something.” I cleared my throat, and looked around the cramped little room, at how the sun’s beams shone in through the stained glass window of Jesus opening His robe to reveal His heart.

I shrugged, and like a lemming poised at a cliff with a thousand of my lemming buddies waiting impatiently behind me, I jumped. “I said I can’t go through with this...”