Every Wednesday, I put on my pimp clothes (I favor feathered hats and zebra prints
with a little crushed velvet) and help promote the new or old work of some of my favorite fellow authors. Be sure to stop by every week and see what’s new.

This week, I’m all about CHAOS STATION by Jenn Burke & 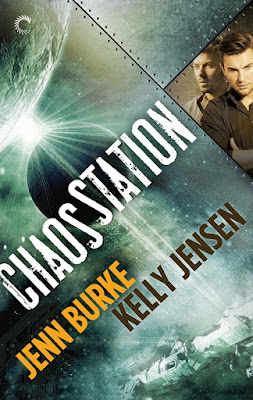 Kelly Jensen
Here’s what the authors have to say about CHAOS STATION:
Like most books, Chaos Station came about when my friend Jenn and I asked “what if”. We’d been role-playing a couple of characters together, two guys, lifelong friends, who’d been separated by war. Each thought the other dead. When they were reunited, they discovered their friendship ran deeper and promptly fell in love. Their new relationship was complicated by more than the mental and physical scars left over by the war, however. Their big “what if” was their existing friendship. What would happen if the ‘love’ thing didn’t work out?

When we decided to share their story, we built them a world and started the first book at the point of reunion. We changed the backstory a little, and the guys were naturally different. You can never write the same character or story twice, I’ve discovered. But what we ended up with was so much more. As we explored the war that had separated the two, and the effects it had on them, we found a plot that resonated in so many ways: the effects of war and the fate of returned soldiers. The peaks and pitfalls of experimental technology. The attitudes of a future society toward the role of the individual.

And, most importantly, whether simple things like friendship, and complicated things like love, could survive all of the above.

The war with the alien stin is over, but Felix Ingesson has given up on seeing his lover, Zander Anatolius, ever again. Zander’s military file is sealed tighter than an airlock. A former prisoner of war, Felix is attempting a much quieter life keeping his ship, the Chaos, aloft. He almost succeeds, until Zander walks on board and insists that Felix isn’t real.

A retired, broken super soldier, Zander is reeling from the aftereffects of his experimental training and wants nothing more than to disappear and wait for insanity to claim him. Then he sees footage of a friend and ally—a super soldier like him—murdering an entire security squad with her bare hands and a cold, dead look in her eyes. He never expected to find Felix, the man he’d thought dead for years, on the ship he hired to track her down.

Working with Felix to rescue his teammate is a dream come true…and a nightmare. Zander has no exit strategy that will leave Felix unscathed—or his own heart unbroken.