On the Preservation of Innocence: A Guest Post by Jon Wilson 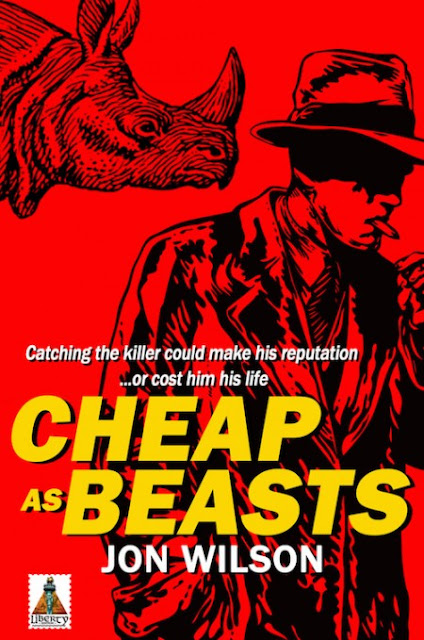 Baldwin went on to challenge the violent homophobia of, among others, authors such as Raymond Chandler, and, as I have admitted elsewhere, the initial impetus of my novel Cheap as Beasts, came after rereading the first fifty-odd pages of The Big Sleep (https://en.wikipedia.org/wiki/The_Big_Sleep). Baldwin's critique, in 1949, surely felt groundbreaking (and, in light of today's bathroom wars, still echoes with a certain prescience), but I'm not much of a serious essayist, so those seeking an academic, philosophical, or, let's face it, even a general survey may want to go right on seeking.

Instead I want to tell you about a time I didn't buy a shirt.

That hardly sounds like an exciting story. Even if you're one of those people who love to shop, the tagline pretty much spoils the ending. Cos I didn't buy it…Even though it fit nicely (a circumstance not to be undervalued—see Tuesday's Pink Lemonade entry), was 100% cotton (a must) and discounted (a double-must). You see, I couldn't bring myself to buy it because it was pink.

I'd like to tell you this happened back in my teens when I was struggling with accepting my sexuality and when the only gay character one regularly saw on tv was Charles Nelson Reilly. Unfortunately, it happened last week.

I'm as shocked as you. Maybe more. Or then again, maybe I'm making too much of it. But I remember looking at that shirt, pausing, and then deciding, "Nope, I…Nope." Maybe it's because I'm too fat (I again refer you to Tuesday's Pink Lemonade) and feared I'd end up looking like a giant Easter egg. That last excuse is tempting me with a warm embrace of denial, but it is a lie. To me that shirt screamed, "GAY!"

I'm no butch manly-man. In fact, now that I think about it, that shirt would probably look fantastic on someone who was. The pink cotton stretched across his hard pecs, a few coarse strands of chest hair curling flirtatiously out of the V-neck…His arms packing the sleeves like great pink salamis…The lower seam hitched up over his belt buckle…

Sorry, where was I?

Oh, yeah, no manly-man me. But I'm what used to be called—in less enlightened times, I'll allow—"straight-acting". (Which never really should have been a term embraced by any self-respecting gay man because it's right there plain as day that you're saying your whole demeanor's an act. Worse, your implying no homosexual would naturally behave as you do. So, yeah, that's a minefield and let's just step slowly back from the barbed wire surrounding it and find another path…)

I can't remember exactly when it happened, and the why of it has probably been mostly reconstructed in my imagination, but I still hear my mother's voice telling me that boys swing their arms when they run. In my imaginary reconstruction, I'm running alongside my two older sisters—or, more probably, a few steps behind—and undoubtedly doing what they were doing. Not that either of my sisters were particularly girly (something mothers probably critiqued in the 70s, just unbeknownst to their slightly swishy sons). The most girly thing I recollect about the sister a few years older than me is that she had a pair of white gogo boots she wore a lot. (It really was a hip decade and I'm afraid most of you missed it!) I wish I had digital pictures to back me up, but I sent both sisters requests for pics, and have yet to hear back.

That my mother's words still echo in my head is probably not surprising to most gay kids of my generation. This was before all children were recognized as special snowflakes; when parents, schools and churches felt obliged to train you to be the sort of snowflake the world expected you to be. And I certainly don't want to single my parents out as extreme or regimental or even particularly strict. My day had been an army drill sergeant and the family was expected to go to church every Sunday, but I pretty much hit the jackpot on parents. They had no problem showing affection and, when the inevitable day came that they learned I was gay, neither considered (out loud, anyway) disowning me.

But I do remember her saying that about swinging my arms. Just like I remember being in fifth or sixth grade and having a group of guys call out my name just so they could laugh at the—let's call it "graceful"—way I pivoted to answer them.

I was not an athletic kid. I could hit a ball and I could run the bases, I could shoot a basket (to some degree, and never anything fancy), and I knew the rules of football, but I never felt any keen desire to engage in those activities. Racket sports were my thing, when "a thing" was required, and I rocked at Badminton…Which, y'know, in itself is sort of a red flag. Despite a lousy serve I played tennis moderately well, and, at Summer Camp I once did the unthinkable and beat a counselor at ping pong. (That's seriously one of my more traumatic sports memories. I had a major crush on that counselor and he shunned me for the rest of the summer!)

I suppose I was bullied in school, but not mercilessly, and (going back to my parents), my self-esteem was quite healthy. In grade school and a good part of Junior High, I was a "Brain" more than a pansy, and then I fell in with the drama and band kids, meaning I was teased more about being a drama\band kid than for any suspect sexual deviance. (My sexual deviance was well-established in my own mind, however; though I dated several nice girls, I'd started messing around with other boys—well, one other boy in particular—quite young.)

I knew I was gay quite early too, even though I continued to date girls (really just two) in college. I recollect a gay friend at the time explaining he didn't believe I was gay at all; he said I was just "artsy". I think he meant bohemian, but he called me "artsy", carefully prefacing it with the "just". (I don't think "bi" ever entered my mind—despite the fact that these were the bi-Bowie and bi-Jane Wiedlin years—I was just a gay guy who liked to make out with girls occasionally—and the last thirty years has been exclusively me with dudes, so, y'know, hindsight and all.)

Which brings me to another interesting aspect of my inability to buy the pink shirt. Thirty years ago I would have bought it on principle. I'd have said, figuratively rather than actually probably, but still: "Fie on your expectations world! That's right, Fie you M****rf****rs!"

And, on the one hand, that bothers me because have I turned yellow? Or has the world progressed, matured, abandoned it's febrile innocence and rendered the need to shout "Fie!" obsolete? I don't think it's the second. We've come a long way, baby, but we ain't there yet.

I don't worry much about the way I'm perceived by the world. Well, I do but not about whether or not the world perceives I'm gay. I worry about the fact that I sometimes forget how old I am. At my last job I came home one night and wondered why I was so exhausted. I quickly realized that I'd attached myself to a social circle twenty years my junior. Worse than the fact that I could no longer keep up, I began to fret that they saw me as a sort of mascot or pet old person they kept around ironically. It was terrifying.

Besides, I write gay fiction, so anyone who progresses beyond the most casual of acquaintances is probably more or less aware of, let's this time say "proclivities". And really I don't want to beat myself up too much about not buying the shirt because it prompted this essay, which is today's lemonade. That moment of homosexual panic I experienced got me thinking about masculinity, explicitly its various trappings, and that got me to thinking about the male homosexual experience, which, is more or less compelled to confront the question of masculinity in ways the heterosexual experience manages to avoid.

Oh, I agree with Baldwin; there's a definite American (though almost certainly not exclusively American) construct of masculinity that is in many ways infantile. And surely any number of great heterosexual writers have explored, examined, or even eviscerated it. But I do believe the homosexual experience (and I'm certainly including gay women here too) compels those of us who aren't straight to see it askance even when we embrace it. We thereby bring a unique perspective to the question of masculinity (and femininity for that matter) and necessarily have important things to say about it.

I could be accused of writing tough guy fiction. (In fact, I have been, though neither as vehemently nor as regularly as I'd like.) The one superpower of Declan Colette—the PI narrator of Cheap as Beasts and Every Unworthy Thing—is his ability to take a punch (it's not really a superpower, but it's not like he spies dust on the carpet and immediately recognizes his adversary has been to the Maldives either). The plots of both of my westerns, A Shiny Tin Star and A Hundred Little Lies, turn on pretty violent fistfights. But I don't quite see it that way. I think I write rather regular guys who just happen to be caught facing extraordinary circumstances.

But I do rather enjoy exploring the question of masculinity, especially in the Declan Colette books. These take place not long after the end of WW2 and America was experiencing a panic of sorts of its own. Communism and Homosexuality were twin specters threatening the American Way of Life. If you've read Chandler's Big Sleep, you may remember the line that so rankled me, about how, no matter how tough they looked, queers lacked any real iron and folded like lawn chairs (I'm paraphrasing because it doesn't deserve a direct quote and/or I'm too lazy to get up and find my Chandler). But really that's less Chandler treading out a tired stereotype than it is an attempt to reassure himself that when it came down to it he—and, by extension, any real man—could always spot the queers. They weren't the same as the "normals". A major part of the fear of that period that is mostly forgotten now is that WW2 revealed the old stereotypes didn't hold. Queers could be every bit as masculine as the "normals". They, like a Commie, could be anyone.

The Pink Lemonade Blog Tour continues tomorrow at Meg Perry Books, and, if you missed any previous entries, you can find them HERE (Part One) and HERE (Part Two)

I'm giving away a signed copy of both the Declan Colette books at the end of this blog tour. Just leave a semi-cogent comment (which, I suppose, means I'll have to allow "YOU SUCK!") to any of the five parts in the Pink Lemonade Blog Tour to enter (if you leave multiple comments or comment each day, you get entered for each comment)!