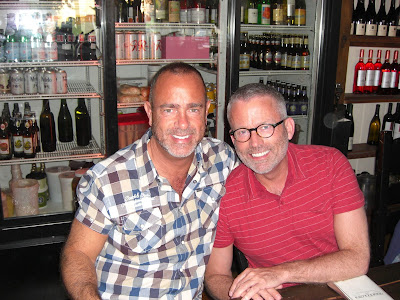 I get asked this question a lot and the answer lies in the little story I’m about to tell you. It’s a story about finding one’s own happy ending—and how, today, even two men in love can end up Legally Wed.

My husband Bruce and I were having dinner at a little French bistro in the Capitol Hill neighborhood of Seattle on my birthday a couple years ago and, as the wine flowed, we talked. He told me how content he was with his life and that, really, there was nothing else he could wish for. I felt the same way (I still do). It's nice when you're on the same page. He said we had something special and that one word summed up what we had. I'll get to that word later.

But it wasn't easy getting to this page in the book of our lives. And thinking about Bruce and me has made me think about my other special love, and that's writing. If any of you out there have followed my career at all, you'll know that, lately, my stories have plotted out the course of love just as much as they have the build-up of suspense or horrifying revelations. I can proudly say I am now just as much a romance writer as I am a horror or dark suspense writer.

You may wonder why my writing slipped off in this new direction. I certainly have. And I think it has a lot to do with Bruce. See, we're happy. We're content. We're settled and in a love that only continues to grow with the passage of time.

I don't know if this is a leap of logic that makes sense but I think that I am more drawn to writing stories that map out the connections made by the human heart these days because I am not expending as much energy seeking out that connection in my own personal life. Now that I have found my one true love, my soul mate, I can open up and write more freely about what draws people together and what keeps them apart. I find those connections fascinating and I don't believe I could write about them objectively until after I had found, after much searching, a relationship that would work for me, one that would nurture and sustain.

Before Bruce, there was a marriage to a woman and a child. Both of those were—and still are—wonderful in their own ways. But trying to live a life that was not my own was not only emotionally exhausting, it was dangerous in many ways. With a lot of heartache, I had to let that dream, which really was never for me, go. I came out in my early thirties, in a world where gay marriage was not really even being discussed yet and the specter of AIDS loomed large. It was not necessarily a good time for a gay man to be experiencing the world and finding himself. But then, when is it ever a good time? But my point is I went through a lot of searching, a lot of experimenting, a lot of bad choices, always in search of love, and always coming up empty-handed.

A lot of those disappointments occurred because the real love I needed—the love of myself—I had yet to discover. I look at my thirties as my true adolescence, with its attendant growing pains.

It wasn't until I was 43 that I met Bruce. Gone were the hopes that I'd meet a special man in some bar or even a gay social group. The era of the Internet was on us in a big way and I placed an ad with the headline, "What's Your Story?" Bruce was one of several who responded, and the only one with whom I connected. He sent me some pictures of himself. He said things in his very first response to my ad that resonated.

I wrote back. He wrote back and we started a daily correspondence that would last two weeks, two weeks before we even laid eyes on one another, even though we lived less than two miles away from the other. We began to get to know each other and we both liked what we saw, what we read in our lines to each other, and what was between them. We had both reached a stage where we were ready for the other. Timing is everything.

We met in person and it was magic.

I won't say we didn't have some bumps in the road, though, getting to where we are today. Nothing really good ever comes easily. But Bruce and I were always willing to talk--whether it was face to face or through e-mails (and now texts and Facebook updates!). The line of communication has always been open and I think that's what's made the difference with us.

It's also made it possible for me to be able to sit back and be more objective about writing romance because finally, at age 59, I finally, finally, have a handle on what works and what doesn't. Until I had that key, I honestly believe I couldn't have written convincingly or effectively about romantic love.

So you can expect two things from me—one, that I will always be in love with Bruce and two, that you will enjoy many more stories of love and romance between two men—because of Bruce and what he gave to me.

Oh, and that one word I alluded to above? The one Bruce used when he said it summed up what we had?

That word was family. 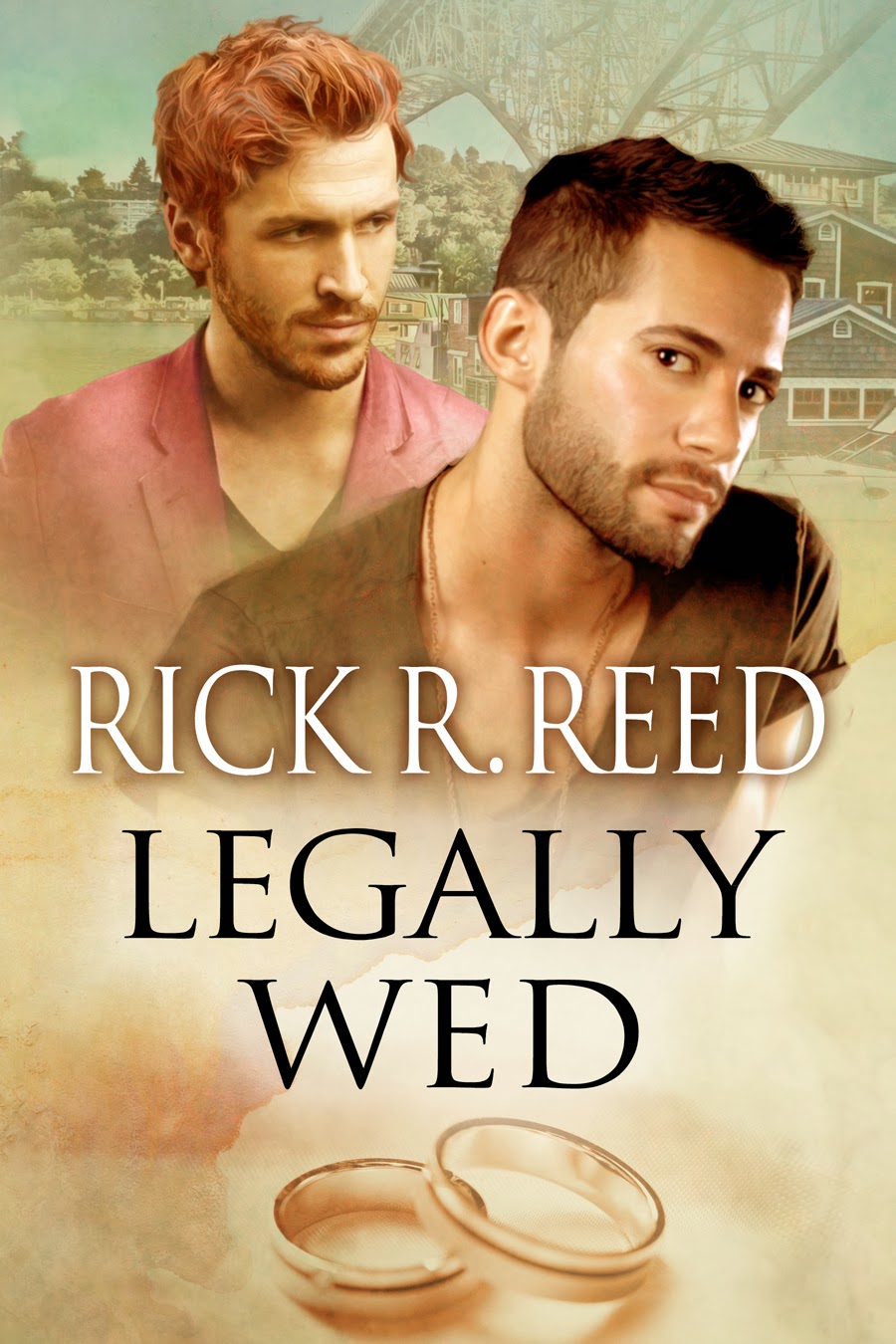 (Dreamspinner Press/2014/Contemporary Romance)
Love comes along when you least expect it. That’s what Duncan Taylor’s sister, Scout, tells him. Scout has everything Duncan wants—a happy life with a wonderful husband. Now that Seattle has made gay marriage legal, Duncan knows he can have the same thing. But when he proposes to his boyfriend Tucker, he doesn’t get the answer he hoped for. Tucker’s refusal is another misstep in a long line of failed romances. Despairing, Duncan thinks of all the loving unions in his life—and how every one of them is straight. Maybe he could be happy, if not sexually compatible, with a woman. When zany, gay-man-loving Marilyn Samples waltzes into his life, he thinks he may have found his answer.

Legally Wed EXCERPT
Same-sex marriage had just become legal in Washington State and Duncan Taylor didn’t plan on wasting any time. He had been dating Tucker McBride for more than three years and, ever since the possibility of marriage had become more than just a pipe dream, it was all Duncan could think of. He had thought of it as he gazed out the windows of his houseboat on Lake Union, on days both sunny and gray (since it was late autumn, there were a lot more of the latter); he had thought of it as he stood before his classroom of fourth graders at Cascade Elementary School. He had thought of it when he woke up in the morning and before he fell asleep at night.

For Duncan, marriage was the peak, the happy ending, the icing on the cake, the culmination of one’s hearts desire, a commitment of a lifetime, the joining of two souls. For Duncan, it was landing among the stars.

And for Duncan, who would turn 38 on his next birthday, it was also something he had never dared dream would be possible for him.

And now, too excited to sleep, he was thinking about it—hard—once again. It was just past midnight on December 6, 2012 and the local TV news had pre-empted its regular programming to take viewers live to Seattle City Hall, where couples were forming a serpentine line to be among the first in the state to be issued their marriage licenses—couples who had also for far too long believed this right would be one they would never be afforded. Many clung close together to ward off the chill, but Duncan knew their reasons for canoodling went far deeper than that.

The mood, in spite of the darkness pressing in all around, was festive. There was a group serenading the couples in line, singing “Going to the Chapel.” Champagne corks popped in the background.

Duncan couldn’t keep the smile off his face as he watched all the male-male and female-female couples in the line, their mood of jubilation, of love, of triumph traveling through to him even here on his houseboat two or three miles north of downtown. Duncan wiped tears from his eyes as he saw not only the couples but also all the supporters, city workers, and volunteers who had crowded together outside City Hall to wish the new couples well, to share in the happiness of the historic moment.

And then Duncan couldn’t help it, he fell into all-out blubbers as the first couple to get their license emerged from City Hall. 85-year-old Pete-e Peterson and her partner and soon-to-be-wife, Jane Abbott Lighty, were all smiles when a reporter asked them how they felt.

“We waited a long time. We’ve been together 35 years, never thinking we’d get a legal marriage. Now I feel so joyous I can hardly stand it,” Pete-e said.

It was such a special moment and it was all Duncan could do not to pick up the phone and call Tucker and casually say something like, “Hey honey, you want to get married?”