Have You Read my Book About Reincarnation...and Love? 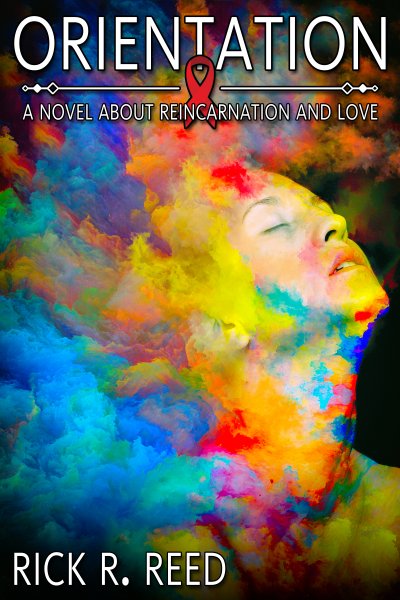 A novel about reincarnation and love

Christmas, 1983: Robert is a young man tending to his soul mate Keith, who is dying from AIDS. Robert tries valiantly to make this a special Christmas, but loses the fight late Christmas night.

Christmas, 2007: Robert ventures out and finds a young girl about to fling herself into the waters of Lake Michigan. He rescues her, and the two form a bond forged from familiarity, and even love. Neither understands it, since Jess is a lesbian and Robert is gay. But there's more ...

Jess begins having strange dreams, reliving key moments she couldn't know about in Keith and Robert's life. They begin to wonder if their feelings might be rooted in something much more mystical than a savior/victim relationship.

As the two move toward each other, Robert's younger lover Ethan plots the unthinkable. His crystal meth-addled mind becomes convinced there's only one way to save himself: Robert's destruction.

Robert hesitated outside the bedroom door. Inside, it was quiet, and he dreaded going in there and finding Keith on the bed asleep, a sheen of sweat clinging to his sunken cheeks, his breath phlegmy and labored. What if Keith’s call was just a momentary peek through the twin curtains of fever and consciousness? Or worse, the product of his own overly hopeful imagination?

What would be, would be (hadn’t some virginal blonde even once sung about it?). Robert steeled himself: deep, cleansing breath, let it out slowly. And entered the room.

Keith was awake. His face looked even more drawn and tired—the color of ash. Robert would have said it was impossible for him to look any sicker even this morning, but now he did. In the air, despite the cinnamon- and vanilla-scented candles in the room, was the smell of sickness and shit.

But oh, Lord! Keith was looking at him. Looking right at Robert. And he was seeing him! For the first time in forever, their gazes met and connected. Robert approached the bed warily, as if a sudden movement would send Keith plummeting back into unconsciousness.

“Honey? Can you hear me?” Robert stood, wringing his hands, heart fluttering, beating against his ribs.

“Of course.” Keith’s voice was a croak. Gone were the bass notes that had made him sound so sexy and assured. Keith reached a bruised hand out over the covers and patted the bed. “Would you sit next to me?”

“Oh, of course!” Robert took two steps and weighed down the bed, reaching out to brush a strand of hair off Keith’s forehead, biting his own lip at the heat radiating off Keith’s flesh. “I’m so happy you’re awake.”

Keith swallowed. The swallow took a long time and looked as if it took all of the sick man’s effort. He let out a weak sigh and turned his head. He looked up at Robert and managed a wan smile. Robert closed his eyes and gently laid his head atop Keith’s.

And then Keith began to talk, his old voice suddenly returned, strong and sure. “I have just a few things to say, Robert. And I need you to shut up and listen. No interruptions. The first thing I want to say is ‘Merry Christmas.’ I’m so sorry I couldn’t be a bigger part of things for this, our first Christmas together, but that decision was taken from me and it doesn’t look like Mr. Claus is seeing fit to give me a chance to make it up to you.

“The second thing I want to say is that I love you with all my heart. I searched forty-some-odd years for you, for what I’ve always dreamed of, and what I thought I couldn’t have when you dropped, like a gift, like an angel, into my life last winter. You were what I hunted for all my life: a family. You are my family. Don’t ever forget how precious that is.

“The third thing I want to say is that you’re an idiot, running around, burying your head in the sand, and trying to make a Christmas that neither of us has the capacity to enjoy. And last, I love you for that. I love you so much for trying ... for hoping against all odds that this moment would come and I would let you know how much I appreciate you. For hoping that we might share one final kiss before I have to go. And my love, I do have to go.

“But I couldn’t leave without you hearing these four words. You. Are. My. Family.”

Robert wanted to cry, but there was cold stillness inside, almost as if the frigid air outside had invaded and possessed him.

Robert lifted his head, stopping himself from recoiling at the memory of a feel of a crusty lesion on his cheek. He reached down and squeezed Keith’s hand, knowing with all his heart that Keith wanted to say all those things.

But the reality was that Keith had only enough breath left to whisper, “I need ...” A big hard swallow, tears welling up in Keith’s sallow eyes. “You.” Keith pushed out the word “you,” Robert thought, with all the breath he had left.

And that was all, really, Robert needed to hear.

Now, the eyes Robert stared down on were not only yellowed and red-rimmed, but vacant.