NEW AND NOTABLE: CHASING THE DREAM A Guest Post from Ann Marie James 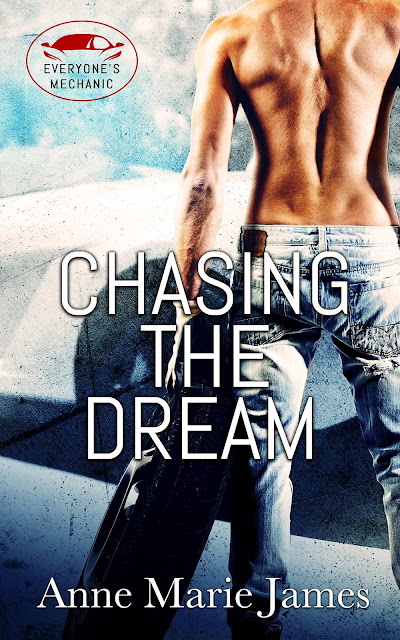 Hello everyone. Ann Marie James here. First, I want to thank Rick R. Reed for letting me do my first ever blog post on his blog. I appreciate the belief in me and the show of support.

I had a (very) short story, "The Cake," published in an anthology for another publisher a few years ago. Unfortunately, life got in the way and I had to put my writing on the back burner for a bit. I now have my first ever novel, Chasing the Dream, coming out with Pride Publishing on October 22, 2019, set in the same world. (Chasing the Dream is currently available at Pride Publishing as well as other retailers).

The (very) short story, "The Cake" is being offered as a free read with Pride Publishing and is available now.  In it we are introduced to Kirk, the owner of the garage, Everyone’s Mechanic, the series title. It’s not necessary to read it before reading Chasing the Dream, but hey, it’s free. Free is always good!

I grew up in the Binghamton, NY area, but have lived in Kentucky, Germany and North Carolina. Chasing the Dream is set in Raleigh, NC, where I lived for twenty plus years.

CONTEST
The main characters have a conversation in the book about where have they been and where have they always wanted to visit in the world. For a chance to win a copy of Chasing the Dream, please comment below as to what your answer to that question would be and why.

Winning answer will be picked by October 28, so comment soon!

BLURB
When Lee meets his fantasy man, his shy nature makes him want to run. But what will he do when his dream guy won’t let him?

Saul Valencia. Tall? Check. Muscles? Check. Everything Lee Clark ever dreamed of in a man? Check. Bad case of nerves and feeling like an idiot whenever he’s around? Sigh. Check.

Being kicked out of the family home for being gay would have been bad enough, but Lee Clark also worked in his dad’s garage. Losing his family, his home and his job all in the same day left him floundering. He can’t believe his luck might be changing when he finds a job at Everyone’s Mechanic, another garage, where he’s accepted for who he is.

Then Saul, a former linebacker for the NFL Raleigh Raptors and a friend of Lee’s boss, walks into his life. The man is the embodiment of all his teenage fantasies, but Lee doesn’t dare hope Saul will ever actually notice him.

Intrigued from the start by the shy man now working for his business partner’s boyfriend, Saul struggles through bad advice and misunderstandings to convince Lee that he’s serious about wanting a chance with him. Getting Lee to give him a shot at romance was difficult enough, but when drama and blackmail from outside sources are added in, the relationship becomes almost impossible.
It will take the combined efforts of Lee’s garage family and Saul’s real one to set things right.

ABOUT THE AUTHOR
To be clear Ann Marie James is not my real name, but it does have meaning for me. It is a combination of my middle name, my niece’s middle name and my son’s middle name. Everyone has their reasons for picking or not picking a pseudonym, I just wanted the freedom to take risks and spread my wings through my own creation, not as so and so’s daughter or so and so’s mother etc. I am a divorced mother of one twenty-something year-old son.