HUSBAND HUNTERS Is Back! 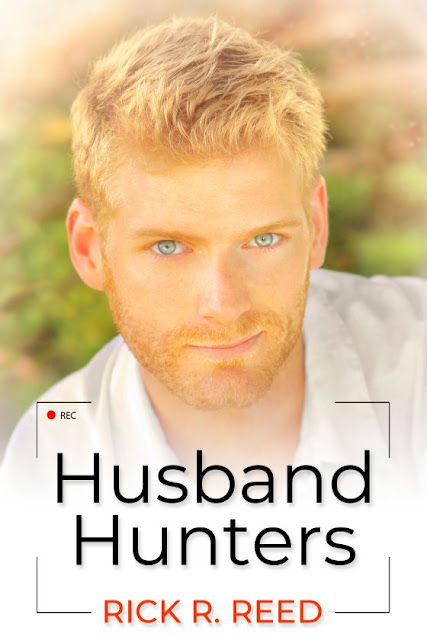 Today marks the re-release of my friends-to-lovers, reality-show love story, HUSBAND HUNTERS. Hope you'll check it out and pick up a copy! The book has been re-edited and has a spiffy new cover, shown above.

I got inspiration for this story from the strangest place: HGTV's House Hunters TV show.

I asked the 'what if?' question so many writers ask when starting a new tale. This time it was, "What if House Hunters replaced houses with men?" OnTopDownUnder Reviews called Husband Hunters:
"The ultimate friends-to-lovers story..."

BLURB
You never know where the love of your life might turn up.


When Matt Connelly suggests to his best buddy Cody Mook that they head to downtown Seattle to audition for the gay reality TV showHusband Hunters, both agree the experience might be a lark and a chance to grab their fifteen minutes of fame. What they don't know is that the show, modeled after HGTV's House Hunters, will open doors of longing neither expected. For Matt, the secret love he has long harbored for Cody might be thrust into the spotlight. Cody might realize his search for his perfect-forever-man extends no farther than the man who's always been at his side.


Husband Hunters promises laughter, tears, and, just maybe, a happy ever after. Will Cody and Matt's story be one of best-friends-to-lovers—or an outright disaster?

This week’s review takes a look at the latest entry in the reality television craze: Husband Hunters. For better or worse, reality TV and shows like this one have become a mainstay of twenty-first century entertainment delivered via the tube. Do TVs even have tubes anymore? I digress….

Husband Hunters is based on a simple premise, shamelessly modeled after another life-decision show: HGTV’s House Hunters. As we all know, that show takes us into the life of someone hunting for the perfect home. We get to stomp around with the potential buyer, testing the water pressure, checking out the backyard, searching for cracks in the ceiling. It’s all great fun and gives us a beginning, middle, and end, and leads up to a happy ending where we get to see the contented homeowner or owners all settled in their new nest, where they will live in residential bliss for many years to come.

Like House Hunters, Husband Hunters does much the same thing, focusing on someone who wants to find that perfect situation where one can be happy for the rest of one’s life—or at least the immediate future. But this show takes an even more modern twist, because it is about gay men looking for husbands. Along with the blossoming of reality television, the twenty-first century has also witnessed the blossoming of marriage equality, so that the premise for Husband Hunters is not only compelling but entirely possible—and legal.

Husband Hunters does not stray far from the show it’s modeled after in its basic premise. We have a gay man looking to get hitched and follow him as he spends three separate weekends with three potential suitors. We are privy to the conversation (easy or stilted), the gazes (soulful, embarrassed, or barely concealed boredom), the dinners, the breakfasts, and the activities the producers planned, designed to help the couples get to know one another. In recent episodes we have seen everything from a kayaking adventure on Kauai’s Wailua River to antiquing in St. Charles, Illinois, to attending the famous Sundance Film Festival. We are not privy to what goes on overnight between the “contestants.”

At the end of the three weekends, our single gay hero chooses one man to go on and… marry! Yes, darling, you heard me right. This ain’t your father’s Dating Game. In a fast-forward to a few weeks or a few months later, we get to be witnesses at a ceremony wherein the couple says their “I do’s.”

Cynical side note: one thing that not many folks know is that the network pays for the divorce if the couple decides to split up within one year. But that’s not something they talk about—it would be like focusing on a skid mark in a Fruit of the Loom ad. Yuck!

Anyway, your Couch Critic is here to answer the question: does this show make for good television? Like the show it’s modeled after, Husband Hunters offers us a complete story with a beginning, middle, and an end. You can’t help but get invested in our lovelorn single guy out to find the man of his dreams. Will he choose the hot but buttoned-down CPA from Santa Monica? Or will he go with the penniless but talented and oh-so-quirky tattoo artist from the Castro? Maybe the ginger bear with the amazing sense of humor will bring him his happily-ever-after. It’s fun to play armchair matchmaker.

But is it ethical? The Couch Critic has to wonder. I presume these guys actually spend more time together beyond the weekend portrayed on the show, just like the House Hunters in that other show must spend time looking at more than simply three options. But it rankles the romantic in me to see such a major life decision become must-watch TV. Can love be parsed into three six- or seven-minute segments?

Oh, what the hell! The romantic in me adores buying into the idea that love can and does happen surrounded by slick production values and ads for Kiehls, Subaru, and the Atlantis Cruise line.

If you can accept the premise and the ethics of a show that creates love and marriage assembly line style like I do, you too may be charmed by Husband Hunters. And you too, like me, may just find yourself more often than not grinning like an idiot or wiping a tear away as you watch the latest installment.