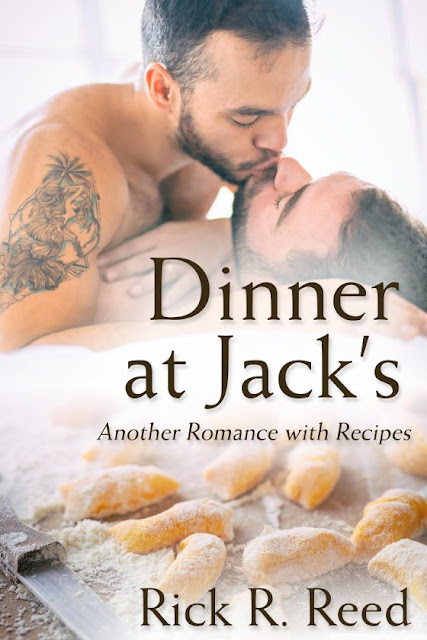 I’m honored to participate again in this year’s blog hop for Autism Month, lovingly initiated by RJ Scott. 30 authors will be featuring a fact each day – which you may or may not know already – and sharing their own thoughts on the topic.

I'm giving away an ebook copy of the book this post talks about: Dinner at Jack's.

Today’s fact: Autism is a lifelong, developmental disability that affects how a person communicates with and relates to other people, and how they experience the world around them.

This year’s theme is FOOD.

Shakespeare said, “If music be the food of love, play on…” I agree with him, except I would paraphrase him “If food be the music of love, cook on…”

People ask why I marry food with love in so many of my stories. One, I believe that food and love, next to air and water, are two very essential things for a happy life.

Dinner at Jack’s shows how food bridges the gap between love and memory and how providing the care and comfort of good food can solidify a relationship. That’s not just something I believe as a writer, but as a human being.

In the excerpt below, you get a ‘taste’ of the kind of comfort food you’ll find in Dinner at Jack’s and get an insider view into the tenuous relationship between our two lovers, Beau and Jack and how a simple pasta dish begin to forge a spark of recognition and tenderness….

EXCLUSIVE EXCERPT (and a recipe!)
Beau neared the bed. He set the tray down not on Jack’s lap, but next to him.

“I have a feeling you’re going to love this,” Beau said softly, staring into Jack’s eyes.

Jack allowed himself, for only a second or two, to stare back, noticing the rich green of Beau’s eyes, which were the color of moss. He tore his gaze away. Something told him it wasn’t right to stare into another man’s eyes that way. There was something shameful in it.

Instead he looked down at the tray. On it was a white bowl filled with little pillows of pasta he remembered were called gnocchi. They glistened with olive oil, dotted here and there with flakes of red pepper. The tang of the cheese, although barely visible on the pasta, rose up to Jack’s nostrils to remind him it was there. Next to the pasta was a plate upon which was piled a mound of greens, it too glistening with a light dressing. Jack could smell the lemon in it, acidic, tangy, making his mouth water.

He gripped his fists together so tightly he could see his knuckles whiten in his mind’s eye. A sudden urge, powerful, rose up, to push the tray very gently, and while smiling all the while—off the edge of the bed.

No! Why did he want to do such a thing?

He couldn’t bring himself to say anything, especially not anything like “This smells amazing” or “Oh my God, this looks so good.” But he could fight the impulse to fling the food, a gift really, to the floor. Or at least he thought he could….

He looked at Beau, then away quickly, to level a glance at his mother, who was all expectancy and hope. Her hands were clasped together, almost as though she were praying. And maybe she was.
Staring down at the tray at last, he lifted it up and onto his lap. He grabbed the paper towel on its surface and tucked it into his collar. Finally he lifted the bowl up and took in a gnocchi.

The flavors danced, truly danced, on his tongue, an explosion of savory heat. He closed his eyes and reveled in how this simple bite of food transported him, made him one with his body in delight… and again, weirdly, nostalgia. He forced the latter away and continued eating, without realizing right away he was also keeping his eyes closed.

When it dawned on him that he was sitting there, gobbling his food down with his eyes shut, his eyelids snapped up. His mother hovered over him, shifting her weight from one foot to the other. Beau stood in the background, wearing a subtle but visible smile of triumph.

Those two ignited a tiny flame of rage within Jack. He glared at them. “Do you think a guy could eat in privacy?” he asked.

“Of course,” Beau said. He grabbed Maisie’s hand and led her from the room. They closed the door softly behind themselves.

And Jack found himself eating every bite. And wanting more….

To Make:
Bring a large pot of water to a boil. Add plenty of salt when you first see bubbles appear.
Heat a large skillet over medium-high heat. Add in olive oil and allow it to get warmed up, a couple of minutes. Throw in your minced garlic and lower the heat. Allow the garlic to simmer and become aromatic, but be careful that it doesn’t begin to brown—you don’t want that bitterness. Add in the anchovy filets and cook for a couple more minutes. You should be able to break up the filets with a wooden spoon, and they should magically vanish into the garlic-flavored oil. Trust me, this will not taste fishy. Throw in your red pepper flakes.
Add gnocchi to boiling water and cook until they rise to the surface of the water. Do not overcook! This will only take a couple of minutes. Remove from water with a strainer and set aside. Reserve ¼ cup of the water you cooked the gnocchi in.
At this point, you can dump the gnocchi in the pan with the seasoned olive oil. Toss pasta to coat with the oil and add your Parmesan. Toss some more, so every gnocchi is coated.
Add in your reserved pasta water a little at a time. You want to loosen up the sauce a bit with this, make it creamier. Your eye will guide you when to stop adding water. You won’t need the whole ¼ cup.
Serve hot.

BLURB
Personal chef Beau St. Clair, recently divorced from his cheating husband, has returned to the small Ohio River town where he grew up to lick his wounds. Jack Rogers lives with his mother Maisie in that same small town, angry at and frightened of the world. Jack has a gap in his memory that hides something he dares not face, and he’s probably suffering from post-traumatic stress disorder.

Maisie, seeking relief from her housebound and often surly son, hires Beau to cook for Jack, hoping the change might help bring Jack, once a handsome and vibrant attorney, back to his former self. But can a new face and comfort food compensate for the terror lurking in Jack’s past?

Slowly, the two men begin a dance of revelation and healing. Food and compassion build a bridge between Beau and Jack, a bridge that might lead to love.

But will Jack’s demons allow it? Jack’s history harbors secrets that could just as easily rip them apart as bring them together.