Big Love contains three of characters I think I’ve fallen in love more than any characters in any book I’ve ever written. I think that favoritism comes from:
So, in this post, I want to get you up-close-and-personal with three brave men whom I believe you'll love as much as I do and tell you about their relationship with me and with the delicate process of coming out.

Our first character is Dane Bernard. Dane’s a little older than your average character in a gay romance, in his forties, and living a very settled life as a high school teacher, with a wife and two adolescent children, a boy and a girl. To look at him, you’d think he had the perfect, settled life. The American dream, the source of contentment. But look closer and you’ll see a man who’s hiding his most essential self under a mound of shame and secrets. See, Dane is in the closet and thinks that, because of the people he’d hurt if he were honest about his orientation, he can never come out of that closet.

Circumstances unlock the closet door, tragic circumstances (as you’ll see when you read Big Love), but nonetheless Dane has no longer got a reason to keep his gay self a secret. Tentatively, he begins to come out. The events in the book force him to come out quicker than he might have wanted or felt comfortable with, but once he’s out and on the other side, he finds the air there is very much worth breathing and very liberating.

I was Dane at one point in my life. As far as I knew, no one knew I was gay. I was married to a woman, had a wonderful little boy, and was living the perfect suburban lifestyle. No one could see that I wore a mask every day and in my darkest hours felt that no one, not friend or family knew who I was. And if they did, my greatest horror was that they would no longer love me. Like Dane, I eventually emerged from my closet and as it was for Dane, it wasn’t always easy. Like Dane did, I found more people stuck by me and still loved me than I thought would, but some did fall away. So I understood Dane’s pain, his anguish and secrets when I was writing. I also understood how a gay man could successfully function—at least for a time and relatively speaking—as a husband and dad. But most of all, I understood and brought to you, dear reader, the joy Dane eventually found in loving himself and that one special man who comes into his life right when he needed him most.

Our second character is Seth Wolcott. Seth’s what I consider the perfectly evolved gay man. Although he’s not perfect, by any means! He’s still smarting from a recent breakup and he’s prone to falling on his ass, in more ways than one (as you’ll see when you read Big Love). But I said Seth was perfectly evolved and that’s because he’s my counterpoint to the other two characters in the book, Dane Bernard and Truman Reid, who, despite a vast age difference, are both dealing with coming out for the first time.

Seth is the character I wrote who demonstrates what it can be like when you love yourself and live your life openly and honestly. With Dane, who’s facing the potential of his first romantic involvement with another man, Seth is not only an object of affection and desire, he’s a role model—one he can and does fall in love with. For Truman, our bullied freshman, Seth is somebody he can look up to and see that by embracing who you are with no shame, you can lead a normal and happy life.

Like Dane, our married, closeted man, I think I also have aspects of Seth. Like Seth, I’m now pretty settled in my gay existence. I’m actually neither proud nor ashamed. I just am. It’s kind of like my height or the fact that I have green eyes. It’s no big deal and yet it’s everything. It’s simply a fact of life.

So it is for Seth. 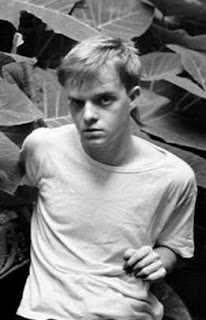 Our third character is Truman Reid. It’s no accident that Truman and I share the same last name (albeit spelled differently). My teenage self and Truman have in common a lot of the same heartache growing up. It’s also no accident that Truman shares a first name of a celebrated gay author, Truman Capote. See the picture of the young Capote? In my head, my Truman looks very much like the beautiful young man Capote was at the time his first book, Other Voices, Other Rooms, came out.

Truman is the character I love most in the book. He’s a mess in some ways and in others, one of the most evolved characters. Like Truman at the start of the book, I endured teasing and bullying throughout most of my junior high and high school years. I know his pain. And when you read the opening scene of the book at the first-day-of-school-assembly and how Truman is terrorized, know that I was recreating something that happened to me when I was Truman’s age.

The difference between Truman and me is that I took a lot longer to deal with my shame and conflict over who I was than he did. I didn’t have his teachers, Dane Bernard and Seth Wolcott, to help me accept myself. I didn’t have Truman’s wonderful mom, Patsy, who said to him:

“God made you just the way you are, honey. Beautiful. And if you’re one of his creations, there’s nothing wrong in who you are. You just hold your head up and be proud.”


Although make no mistake—I did have a wonderful mom. She just wasn’t as evolved in her thinking as the fiercely loving Patsy. I suspect—and hope—that you will love Truman as much as I do. And I hope that you will help cheer him on his journey from being a bullied victim to an out-and-proud kid who loves himself fiercely and accepts no less from others.

BLURB
Teacher Dane Bernard is a gentle giant, loved by all at Summitville High School. He has a beautiful wife, two kids, and an easy rapport with staff and students alike. But Dane has a secret, one he expects to keep hidden for the rest of his life—he’s gay. But when he loses his wife, Dane finally confronts his attraction to men.

And a new teacher, Seth Wolcott, immediately catches his eye. Seth himself is starting over, licking his wounds from a breakup. The last thing Seth wants is another relationship—but when he spies Dane on his first day at Summitville High, his attraction is immediate and electric.