I'm so excited that one of my most poignant love stories is back out in a brand-new edition from NineStar Press. It's the tender story of coming out and finding love not only for that special someone, but more importantly, for yourself.

Teacher Dane Bernard is a gentle giant, loved by all at Summitville High School. He has a beautiful wife, two kids, and an easy rapport with staff and students alike. But Dane has a secret, one he expects to keep hidden for the rest of his life—he’s gay. But when he loses his wife, Dane finally confronts his attraction to men.

A new teacher, Seth Wolcott, immediately catches his eye. Seth is also starting over, licking his wounds from a breakup, and the last thing Seth wants is another relationship—but when he spies Dane on his first day at Summitville High, his attraction is immediate and electric.

Truman Reid was white as a stick of chalk—skin so pale it was nearly translucent. His blue eyes were fashioned from icy spring water. His hair—platinum blond—lay in curls across his forehead and spilled down his neck. He was the kind of boy for whom adjectives like “lovely” and “pretty” would most definitely apply. More than once in his life, he was mistaken for a girl.

When he was a very little boy, well-meaning strangers (and some not so well-meaning) would ask if he was a boy or a girl. Truman was never offended by the question, because he could see no shame in being mistaken for a girl. It wasn’t until later that he realized there were some who would think the question offensive.

But this boy, who, on the first day of school, boldly and some might say unwisely wore a T-shirt that proclaimed “It Gets Better” beneath an image of a rainbow flag, didn’t seem to possess the pride the T-shirt proclaimed. At Summitville High School, even though it was 2015, one did not shout out one’s sexual orientation, not in word, not in fashion, and certainly not in deed.

Who knew what caused Truman to break with convention that morning when he made up his mind to wear that T-shirt on the first day of school? It wasn’t like he needed to proclaim anything—after all, the slight, effeminate boy had been the object of bullies and torturers since, oh, about second grade. Truman could never “pass.”

He was a big sissy. It was a fact and one Truman had no choice but to accept.

His shoulders, perpetually hunched, hunched farther during his grade school and junior high years, when such epithets as “sissy,” “fag,” “pansy,” and “queer” were hurled at him in school corridors and playgrounds on a daily basis. Truman knew the old schoolyard chant wasn’t true at all—words could and did hurt. And so, occasionally, did fists and hands.

And yet, despite the teasing—or maybe it’s more apt to say because of it—Truman was not ashamed of who and what he was. His single mom, Patsy, his most vocal supporter and defender, often told him the same thing. “God made you just the way you are, honey. Beautiful. And if you’re one of his creations, there’s nothing wrong in who you are. You just hold your head up and be proud.” The sad truth was, Patsy would often tell her boy stuff like this as she brushed tears away from his face.

It wasn’t only tears she brushed away, though. Her unconditional love also brushed away any doubt Truman might have had that he was anything other than a normal boy, even though he was not like most of the boys his age in Summitville, Ohio, that backward little burg situated on the Ohio River and in the foothills of the Appalachian Mountains. In spite of the teasing and the bullying—and the pain they caused—Truman wasn’t ashamed of who he was, which was what led him to wearing the fated T-shirt that got him in so much trouble his first day as a freshman at Summitville High School.

The incident occurred near the end of the day, when everyone was filing into the school gymnasium for an orientation assembly and a speech from the school’s principal, Doug Calhoun, on what the returning students and incoming freshmen could expect that year.

Truman was in the crush of kids making their way toward the bleachers. High school was no different than grade school or junior high in that Truman was alone. And even though this was the first day of school, Truman already had a large three-ring binder tucked under his arm, along with English Composition, Biology, and Algebra I textbooks. Tucked into the notebook and books were papers—class schedules of assignments and the copious notes the studious Truman had already taken.

Kirk Samson, a senior and starting quarterback on the football team, knew the laughs he could get if he tripped this little fag in his pride-parade T-shirt, so he held back a little in the crowd, waiting for just the right moment to thrust out a leg in front of the unsuspecting Truman, whose eyes were cast down to the polished gymnasium floor.

Truman didn’t see the quarterback’s leg until it was too late, and he stumbled, going down hard on one knee. That sight was not the funniest thing the crowd had seen, although the pratfall garnered a roar of appreciative laughter at Truman’s expense. But what was funnier was when Truman’s notebook, books, and papers all flew out from under his arm, landing in a mess on the floor.

Kirk, watching from nearby with a smirk on his face, whispered two words to the kids passing by: “Kick ’em. Kick ’em.”

And the kids complied, sending Truman’s notes, schedules, and texts across the gym floor, as Truman, on his knees, struggled to gather everything up, even as more and more students got in on the fun of sending them farther and farther out of his reach.

Now, that was the funniest thing the crowd had seen.

Who knows how long the hilarity would have gone on if an authority figure had not intervened? 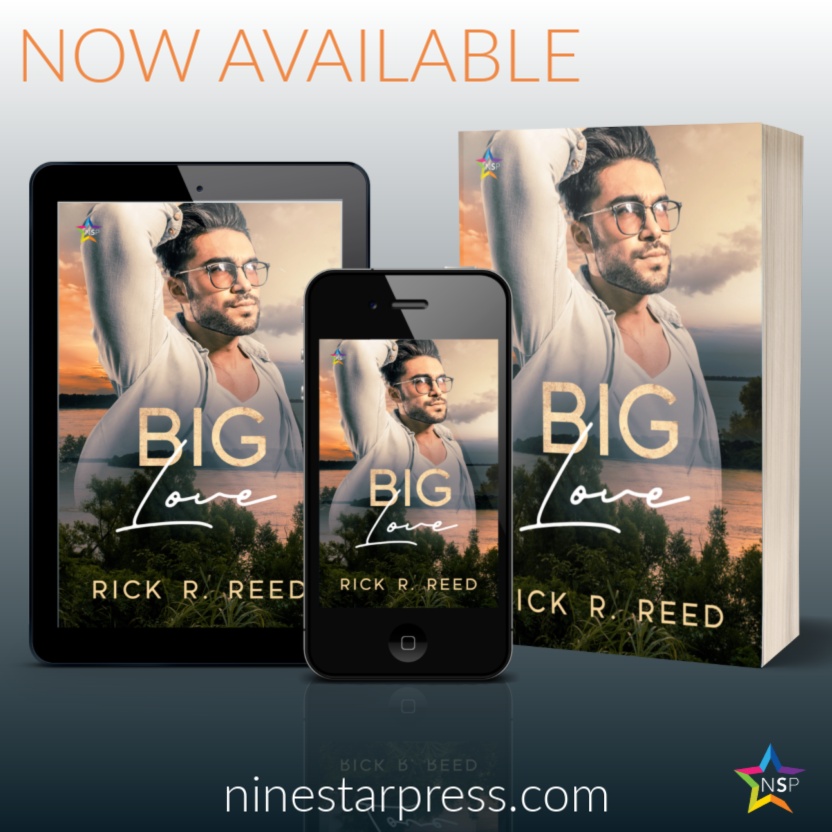 Real Men. True Love. Rick R. Reed is an award-winning and bestselling author of more than fifty works of published fiction. He is a Lambda Literary Award finalist. Entertainment Weekly has described his work as “heartrending and sensitive.” Lambda Literary has called him: “A writer that doesn’t disappoint…” Find him at www.rickrreedreality.blogspot.com. Rick lives in Palm Springs, CA, with his husband, Bruce, and their fierce Chihuahua/Shiba Inu mix, Kodi.