The Perfect Idea for Thanksgiving: Enjoy DINNER AT HOME 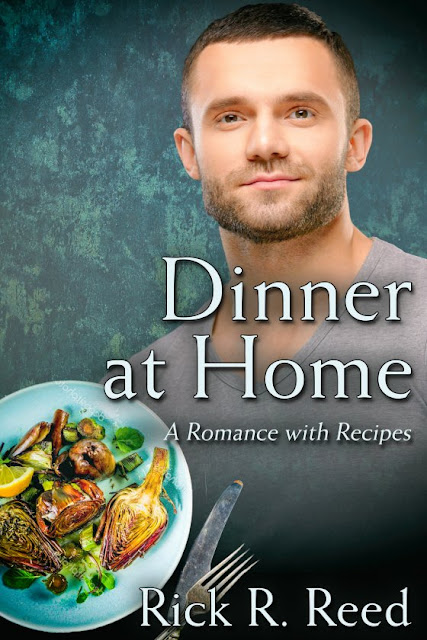 Dinner at Home, my "romance with recipes," offers you a compelling love story, a taste of redemption, and just a few recipes you might want to try for yourself, at home.
BLURB

It only takes a few days for Ollie D'Angelo to lose his boyfriend, his job, and his home. Instead of mourning what he doesn’t have, Ollie celebrates what he does: the freedom to pursue his real passion—cooking. He begins Dinner at Home, a home-catering business, and it takes off.

Late one night, Ollie catches Hank Mellinger, a streetwise hood down on his luck, about to rob his car. Ollie soon discovers that appearances aren’t necessarily what they seem. Hank isn’t a criminal caught red-handed, but a hungry young man trying to make a life for himself and the four-year-old niece he’s trying desperately to take care of.

Instead of calling the cops, Ollie offers Hank a job and a way to pull himself up by his bootstraps. Together, they discover they can really cook... and that their shared passion for food just might lead to a passion for each other.

EXCERPT
At the front door, Ollie paused, keys in hand. "I'm an overly trusting idiot and have been told my heart's too big for my own good." He laughed. "And it's all true. If you have a gun, a knife, or whatever, I hope you know you can take whatever you find in here. Just don't hurt me."

Ollie unlocked and opened the door. Smells of cooking drifted out, warm and comforting, making Hank's mouth water and his stomach growl -- loudly. He placed a hand over it and grinned at Ollie, embarrassed.

Ollie didn't smile back. He cocked his head. "You're hungry?"

"Oh God, you don't know." Hank swallowed painfully, his throat dry, hating to be found so weak and wanting. His mind rushed to Addison, and he realized, again, how important it was that he get home soon to her.

"Why don't you come into the kitchen and sit down? I'll fix you something to eat."

"I know you're hungry. And I suspect, because I have great and powerful deductive reasoning, that your breaking into my Subaru had something to do with that." He opened the refrigerator and started rooting around in it. Although Hank couldn't see his face, he could hear Ollie.

"And I'm a cook. It's your lucky night. I have leftovers out the wazoo. Name your pleasure. I have mac and cheese with roasted peppers and bacon, my famous Mexican casserole with salsa, black beans, corn and roasted chicken, a little veggie beef soup, half a pork tenderloin with a bourbon brown-sugar glaze ..."

Hank wanted to get up and shove the man out of the way and simply kneel before the refrigerator, stuffing what sounded like manna from heaven into his mouth.

"What do you want, buddy? I can heat up any of this stuff in two minutes in the microwave."

Hank put his head down on the table and sobbed. He heard the refrigerator door close and felt Ollie's shadow fall over him. "Oh for Christ's sake, kid. Get a hold of yourself! It's just food." He chuckled and Hank could feel Ollie kneeling down beside him. Ollie slid a hand onto his shoulder and rubbed. "What's the matter?"

Hank managed to ebb the flow of tears once more, embarrassed and ashamed. "It's just that I'm so hungry. I've never been so hungry."

Ollie stood up. Hank watched him pull what looked like a glass dish of mac and cheese from the white refrigerator. He put it in the microwave, pressed a couple of buttons, and the machine was humming, giving Hank a warm late-night supper.

This would seem like such a blessing if it weren't for Addison.

Ollie said, "I'm sorry. We'll get something hot into you in just a couple of minutes."

"What's that?" Ollie paused before the microwave, glass dish in his hand.

"I don't know what that means. You look alone to me."

Hank stared out the kitchen window at the darkness pressing in, like something palpable. He felt like he and Ollie were the only two people in the world. "I have a little girl. Her name is Addison."

Please feel free to repost this blog! I'd be forever grateful.