My Take on THE LITTLE MATCH GIRL 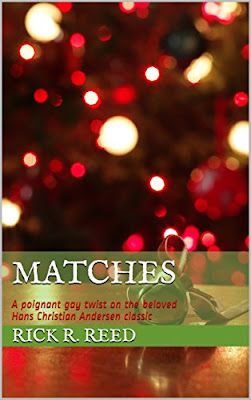 BLURB
Christmas Eve should be a night filled with magic and love. But for Anderson, down on his luck and homeless in Chicago's frigid chill, it's a fight for survival. Whether he's sleeping on the el, or holed up in an abandoned car, all he really has are his memories to keep him warm-memories of a time when he loved a man named Welk and the world was perfect.
When Anderson finds a book of discarded matches on the sidewalk, he pockets them. Later, trying to keep the cold at bay hunkered down in a church entryway, Anderson discovers the matches are the key to bringing his memories of Welk, happiness, and security to life. Within their flames, visions dance-and perhaps a reunion with the man he loved most.

EXCERPT
Anderson made his way down the stairs into the Grand Avenue subway station, the mildew smell of the station rising up as he descended. A rush of commuters passed him going up; a train must have just discharged them. People edged by, giving him as wide a berth as possible. Just as he neared the bottom, a young woman with short black hair, wearing a down coat trimmed in fur, stumbled on the concrete stairs. She dropped her purse and its contents spilled out. Anderson paused and spotted the makeup, the few dollar bills-and a CTA transit card. A part of him told him to grab it and run, that she could well afford another one. If there was enough money stored on the card, it could get him through a good part of the winter.

He reached down to help her gather her things and she recoiled, gasping at the sight of him and scooting back and away. "That's okay!" she said, quickly lowering her gaze to hurriedly pick up the things she had dropped.

It hurt Anderson to see the fear and disgust in her eyes.

In the station, Anderson didn't know what to do. To access the platform, you had to have a card. Sure, he could jump the turnstiles and risk getting arrested; he had seen it done. Some got away with it, more didn't.

Like stealing the woman on the stair's transit pass, it simply wasn't within Anderson to do something criminal.

Among the straggling commuters, Anderson spied an old woman who looked kindly. Perhaps she would take pity on him. With her upsweep of gray hair, her sensible wool coat, rubber boots, and hand-crocheted scarf, she appeared kindly, reminding Anderson of his own late grandmother. There was something lively and warm in her pale blue eyes.

Anderson stepped in front of her and smiled. "Excuse me, ma'am."

The woman stopped, regarding him.

"I hate to ask, but I need to get on the train and, honestly, I don't have a dime to my name." Anderson thought for a moment and came up with a small white lie. "I need to get to the south side, where my family is." He smiled again. "It's Christmas."

The woman didn't say anything.

"Do you think you could spare a couple dollars so I could ride?" Anderson gnawed at his lower lip, hating the position circumstance and the economy had put him in.

"Get the hell out of my way," the woman said quietly, edging by him. She called over her shoulder, "Get a job, why don't you?"

Anderson was taken aback by the coldness and the almost-hatred in her voice. It was so unexpected and so unnecessarily cruel.

Anderson felt the bright sting of tears at the corner of his eyes. His shoulders slumped. He was about to turn and leave the station when a young guy, about his own age, came up to him. Once upon a time, Anderson would have thought he was cute, and if he had opened the door a little, Anderson might have flirted with him. But now his only reaction was-what now?

"What a bitch," the man said, his gaze roaming over to where the old woman was mounting the stairs. He reached into the pocket of his worn denim jacket that looked too thin for the weather and pulled out a transit card. He held it out to Anderson. "Take it. There's only one ride left on there. I wish I could give you more, but I'm pretty strapped myself."

Tentatively, Anderson reached for the card. "Are you sure you can spare this?"

"I wouldn't have offered it to you if I couldn't." He wiggled the hand holding the card. "Go on."

Anderson took it, wondering if some guardian angel, or even Welk, was looking out for him.

Anderson swallowed hard, feeling a lump in his throat. "Merry Christmas to you too."

The guy turned and headed up the stairs, out into the snow.

And Anderson moved toward the turnstiles.