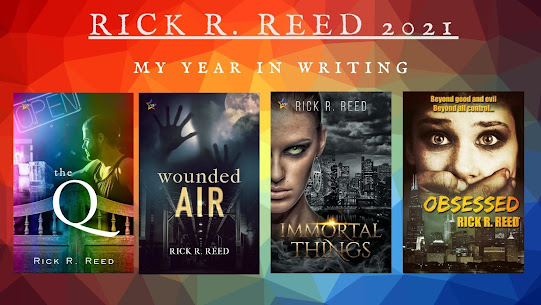 2021 was my year to color outside the lines.

From a raw and poignant portrayal of a pivotal night in a small-town gay bar, to a tale of a tortured--and addicted--ghost in Chicago, to a story of ultimate sacrifice for love, to my depiction of a serial killer's reign of terror in Chicago, the year proved to me that good stories need not be hindered by genre restrictions.

On deck for 2022: a romantic thriller called TOXIC and a magical realism novel that explores domestic abuse in a unique way, SEASPRAY.

Hope you had a happy reading and/or writing year!

Step out for a Saturday night at The Q—the small town gay bar in Appalachia where the locals congregate. Whose secret love is revealed? What long-term relationship comes to a crossroad? What revelations come to light? The DJ mixes a soundtrack to inspire dancing, drinking, singing, and falling in (or out) of love.

This pivotal Saturday night at The Q is one its regulars will never forget. Lives irrevocably change. Laugh, shed a tear, and root for folks you’ll come to love and remember long after the last page.

Rick and Ernie found the perfect apartment on Chicago’s West Side. Before they’re settled, Rick begins having all-too-real disturbing “dreams.” Each time, an emaciated young man with sad brown eyes appears, terrifying and obsessing him.

From their next-door neighbor, Paula, Rick learns about Karl and Tommy, who lived there before them. Tommy’s mysterious disappearance pains her. When she shares a photo of her with Tommy and Karl, Rick is shocked and troubled. Tommy is the man who appears to him in his dreams.

And then they come into her life: a trio of impossibly beautiful vampires: Terence, Maria, and Edward. When they encounter Elise, they set an explosive triangle in motion

Terence wants to drain her blood. Maria wants Elise . . . as lover and partner through eternity. And Edward, the most recently converted, wants to prevent her from making the same mistake he made as a young abstract expressionist artist in 1950s Greenwich Village: sacrificing his artistic vision for immortal life. He is the only one of them still human enough to realize what an unholy trade this is.

Immortal Things will grip you in a vise of suspense that won’t let go until the very last moment…when a shocking turn of events changes everything and demonstrates—truly—what love and sacrifice are all about.

Voices slam through the corridor of his wounded mind. The words of his dead sister cry out. His parents' taunts fill the silent room where he sits and waits -- waits for the murderous rage, filling him with strength, driving him to kill, to touch the cold flesh, taste the warm blood -- to feel alive again ...

A witness has seen him, but his killing only turns her on and now she wants to protect him. His wife suspects him, but the private detective she hired cannot stop him. Joe MacAree fears nothing -- except that he may no longer be human. The thirst that drives him is relentless, moving deeper and deeper into his own shattering, private realm, where each murder is a delicious new gift of life, where revulsion is beauty, and the obsession will never let him go.