Inspired by a Fever Dream SKY FULL OF MYSTERIES 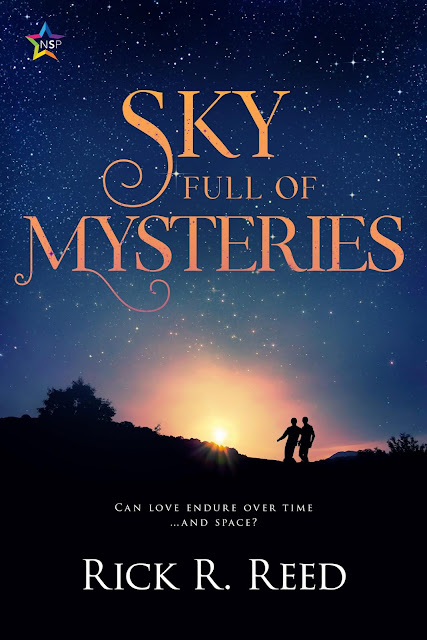 Sky Full of Mysteries is one of my more unusual novels, inspired by a fever dream, it plays with science-fiction elements to explore the lure of new love versus long-term established love and commitment.

ABOUT THE BOOK
What if your first love was abducted and presumed dead—but returned twenty years later?

Where has Rory been all this time? What happened to him two decades ago, when a strange mass appeared in the night sky and lifted him into the heavens? Rory has no memory of those years. For him, it’s as though only a day or two has passed.

Rory still loves Cole with the passion unique to young first love. Cole has never forgotten Rory, yet Tommy has been his rock, by his side since Rory disappeared.

Cole is forced to choose between an idealized and passionate first love and the comfort of a long-term marriage. How can he decide? Who faces this kind of quandary, anyway? The answers might lie among the stars….

Cole listened to the close of Tommy’s office door, the start of the new-age music he listened to as he wrote. Today it was Yiruma. Cole waited a moment, in case Tommy should open the door, and then headed down the hall to the master bedroom. He knew Tommy would not emerge until dinnertime, or even later, if he really got involved.

He sat down on the king-size bed, running his hand over the orange and gray quilt. Part of him simply wanted to collapse backward on it, close his eyes, and sleep for hours. The hum of the window air conditioner was soothing, and he knew he could be under within minutes if he allowed himself.

But no, it was the anniversary. He would do what he always did on this day. He pushed himself up and off the comfortable memory-foam mattress and walked to his closet. One of the advantages of the condo, which was built in the 1920s, was its massive size, a total of nearly 2500 square feet. Their bedroom was enormous and included two walk-in closets, one here and one they’d added off the en suite master bath.

Cole’s was in the bedroom, and even though he knew Tommy wouldn’t hear it, he opened his own closet double doors quietly, wincing at the familiar squeak of the hinges. Cole felt a rush of heat rise to his face, despite the frosty air-conditioned chill all around him. Guilt induced that heat, Cole knew. Like an addict, he’d told himself dozens of times he should put away his obsession with Rory. It wasn’t healthy, not for him, and certainly not for his marriage. Secrets never were. Tommy was understanding, sure, but Cole knew he didn’t realize the depth of Cole’s feelings for Rory, not after all these years. Tommy didn’t realize how much he still yearned for Rory, especially around this time of year.

Cole squatted down on the floor, pushing aside his rather sizable collection of running shoes, Cons, and sandals—no wingtips for this boy—and from the far back recesses of the closet, hidden by shadows and garment bags, pulled forth the old black Reebok shoebox. The box held his and Rory’s entire history. Sad thing was, there wasn’t even enough to fill it halfway.

As he opened the box, Cole wondered why he even bothered. In more logical moments, he told himself that the Rory he still loved didn’t even exist anymore, no matter what had happened. If he was alive, he would have aged, just like Cole, by twenty years. So much could happen, physically, emotionally, spiritually, to a person in two decades. Most people weren’t even close to the selves they were twenty years ago.

Still, he dug into the box. There were only a half dozen or so items inside, and Cole knew each and every one of them by heart. He could just as easily have sat in the kitchen and brought each item out in his mind, examined it, and put it back.

But there was something about touching the mementos. There was an electric connection to each item. He likened it to movies he’d seen about psychics—and how they could get a certain energy from a person off an object they’d touched.

First, there was his old ID for the Bally gym at Century City mall. Cole fingered it and laughed, remembering a time when he did have the energy for going to the gym on a regular basis. Thank God he did, because it was where he’d met Rory. At first sight, he knew that all he’d wanted to do was kiss the guy. He believed, and still did, in a way, that to kiss this kind of nerdy, uncoordinated, bespectacled young man would be a revelation and a kind of salvation for him. He’d be home. His wish had come true later that same day. And Cole had not been disappointed.

What they shared had been far too brief, but it had been real.

Next, there was a cereal box top Cole had hung on to through all these years, simply because it was Rory’s favorite breakfast food. It was kind of endearing that Rory loved Froot Loops so much. Cole used to kid him about how childish it was, that he should eat something more grown-up, sensible, something with a little fiber, for Christ’s sake. “Real men don’t eat Froot Loops,” he’d tease, playfully whacking the back of Rory’s head as he sat on their thrift-store couch, hunched over a mixing bowl full of the stuff, just going to town. “You want me to put some cartoons on?” Cole remembered asking, and Rory had nodded, grinning through a mouthful of milk and unnaturally colored, fruit-flavored confetti.

As the weeks and then months passed with no sign of Rory, he’d hung on to the cereal in the pantry. It wasn’t until he moved in with his sister, Elaine, and she was helping him pack up for his move, that he rescued the box of cereal from the trash, where she’d thrown it.

“Oh no, not this.” He’d snatched it out of the wastebasket.

“You and your sweet tooth,” she said, taking the box from him. She opened it and dug around inside, grinning at him. When she put some in her mouth, though, she spit it into the sink. “That stuff is stale, Cole. Tastes like sugary cardboard.” She replaced the box in the trash.

He waited until she was in the bathroom to rip off the top of the box as a souvenir. Even then it was stupid. But somehow the cereal was a concrete reminder of Rory, who could sometimes be a little kid in a very smart man’s body.

There was a poem Rory had written him, late one night after the third time they’d made love. It was scrawled on a yellow Post-it. Bad rhymes and nearly short enough to be a haiku, it was still the only poem a man had ever written to Cole, about Cole. Even Tommy hadn’t, and he made his living as a writer. Cole got a lump in his throat as his fingertips danced over the six lines and the words “You’re all my heart.”

He missed his sister too, although not nearly as much as Rory. She’d passed away the year before, much too soon, a victim of breast cancer. He knew he should get out to Arlington Heights more often and see his nephew, Bobby, who was in high school now.

He returned his attention to the contents of the box. Here was the photo of Rory unpacking in their new apartment. He wasn’t looking at the camera, his glasses had slipped down his nose, and his reddish-brown mop was a mess, sticking up in several different directions. Cole recalled Rory didn’t even know when Cole snapped the picture. He was too absorbed in what he was unpacking—his computer game software, his most treasured possession. Back then Cole thought the photo would be funny, something to rib Rory about once he’d had it developed at Walgreens.

But now, with the sunlight hitting Rory’s head just so, the youthful exuberance on his face, even the bend of that lithe young body, the photo had become sacred to Cole, a reminder of their beginning a new life together.

How short that life had been! If he had known it would all be snatched away just a few weeks later, would he have behaved any differently? That was the thing about life, though; we were never given the courtesy of a warning when something bad was about to strike. We could only mumble bitter what-ifs, which tasted like ash in our mouths.

Cole set the photo back in the box, eyes welling with tears. Why do I do this to myself? Once upon a time, it seemed there was a point to it, but no more. He was a middle-aged married man mourning a too-brief love from when he was in his prime. Pathetic.

He didn’t look at the rest—a takeout menu, a note Rory had left on the nightstand shortly before he disappeared, letting Cole know he’d gone to the gym—he simply put the lid back on the shoebox and then sat for a moment, cross-legged on the floor, staring at it.

As he did every year, he thought I really should get rid of that box. Burn it, maybe. And just like every year, he shoved it to the back of the closet, hiding it behind and under shoes.

It was his history. No one could take that away.

“Hon?” Tommy called from the hallway. “What are you thinking for dinner?”