THE IMPOSSIBLE CHILDHOOD OF MY DESIRES Releases Today! 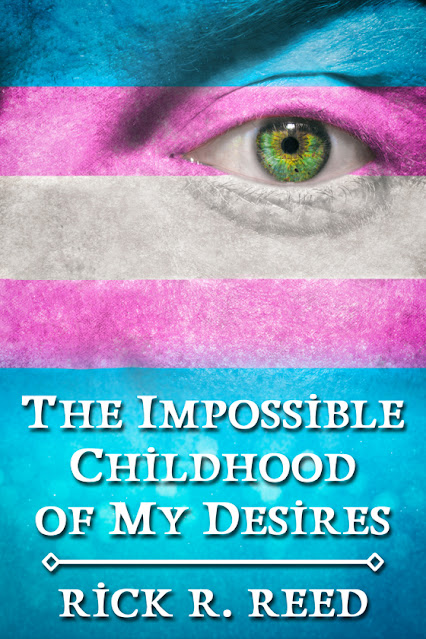 I'm thrilled to share that my latest novel releases today. This one is a little different, branching out in to an area of queer identity I've never explored before, but I hope I've managed to write about the process of transitioning with compassion, kindness, deep respect, and empathy. Please read about my main character's poignant and challenging journey with love and an open mind.

Carl Young’s biggest secret: he’s always felt like Cara Young. Through the years, he acknowledged his authentic female self in ways he kept hidden in the shadows. The makeup, the dresses, the shoes -- all of them represented his most longed-for desires and his deepest shame. 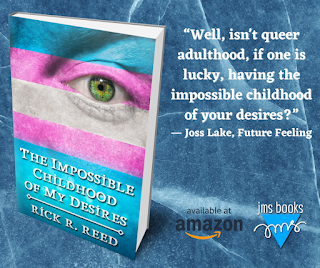 When Carl’s husband Roberto comes home early from work to discover Cara in her wig, makeup, dress, and high heels, he’s shocked. Who is this person he married decades ago? He flees, leaving their home in Chicago for the obliviousness of the sunny skies of Southern California.

Cara begins making tentative steps into a world she imagined would always remain secret. She ventures out, dressing the only way she feels whole. Publicly claiming her identity, she’s terrified, but also filled with joy when she discovers there are others like her, people who will welcome her with open arms and support.

But for both Roberto and Cara, their long-term and love-filled marriage is now a challenge with which they both must reckon. Does her transition mean following separate paths? Or forging a new one ...

Milton had convinced her.

Despite protests of not being ready, of not being prepared, of being absolutely terrified, Milton had insisted Cara jump into the deep end of the pool.

On the phone the other morning, he’d told her, “Sweetheart, all we have is the present. Right now. You can wait around and wait around for some mystical, magical correct moment, but what if it never comes? What if, in actuality, it’s already here?” He blew out a breath. “Honestly, and I’m old, the correct moment seldom ever shows up.” He chuckled. “Maybe the correct moment is an elusive unicorn.”

Cara had had no answer.

Milton persisted. “I can tell that you, my darling, have been waiting all your life for someone else to open the door to your cage. But you have to bear in mind—only one person has been holding the key. And that person is you. You can go on as you have, barely tasting life on your own terms, or you can move forward. Sashay proudly into the future and claim it. It can be terrifying, but you’ll be happier. I promise.”

Because Cara didn’t have the strength or the wisdom—if it could be called that—to argue the point, she’d agreed to dine out with Milton.

As a woman. That would be her enormous leap.

She figured she could back out a couple hours or even a couple days after hanging up. No one was holding a gun to her head.

Yet here she was on Friday night, waiting for the text that would alert her that Milton waited outside. Her emotions were a bittersweet salad of anticipation, dread, and hope.

The honest-to-God truth was that she really, really wanted to do this. Milton was simply the bully/savior standing at the side of the pool, arms outstretched to shove her in the deep end.

And for that, she was grateful, even if she was terrified. Milton was an angel sent down to guide her in the right direction. Stasis had been her byword for far too long.

Roberto had left her. Permanently? That was yet to be determined. But she had no reason to hold herself back from what she’d dreamed of since she was a small child, burying a nose in Mom’s perfume-scented frocks and coats.

So here she was, seated in her living room, watching the dusk fade into night. For courage, she had a Grey Goose martini in front of her. For energy, she had a dance remix of the 1980s playlist on.

She took a sip of the icy vodka and stood. She’d had to look in the mirror when she applied her makeup, otherwise, she feared looking like John Wayne Gacy at a kid’s birthday bash.

But she’d yet to take herself in fully in a reflection.

She was scared to death of what might peer back at her. Would the effect be comic? Ridiculous? Milton Berle in a dress?

There was a silver-framed square mirror hanging above their blue velvet couch. It’d always been ornamental and Cara had passed it without really looking into it hundreds of times.

Now it was a litmus test.

She set down her drink and wandered over to stand before it. She didn’t even realize she’d closed her eyes the moment she was before the silvered glass.

She drew in a deep breath and allowed herself to open her eyes.

She immediately went to the old movie she’d adored as a little boy growing up, Gypsy. And her thought was of the scene when Natalie Wood as Gypsy Rose Lee encounters her adult self in a mirror, in a blue satin gown. Gypsy realizes, finally, she’s come into her own as a woman.

Even as a small child in Ohio, Cara recalled how she understood that the character was, for the first time ever, discovering her own beauty. There was such power and grace in that moment.

Cara thought she was no Natalie Wood as she gazed into the mirror. She probably had at least twenty years on the tragic actress when she’d made the movie, for one thing. For another… Well, she didn’t want to admit how many more pounds she weighed, how her figure was, er, less than Greek.

Yet she spoke to her reflection with tears glistening in her eyes. “Mama, I’m pretty,” she said.

She didn’t laugh. She didn’t think she was being vain. She regarded herself, also in a dress made from blue satin. Coincidence?

She shook her head, taking a spin in front of the mirror. The dress was vintage with a scoop neckline, and belted at the waist with a rhinestone belt. Blue satin pumps on her feet. Her wig was perfect, looking to Cara like her own natural hair. Her makeup was subtle, with a good foundation, a little blush, some eyeliner and mascara and just the faintest hint of blue on her eyelids.

Just before turning away from the mirror, she gasped. Her mother stood behind her, one hand on her shoulder. Her nails were blood red. She squeezed and mouthed, “You are pretty.”

And then she was gone.

The ding ding of an incoming text tore her out of her reverie.