My New eBook, AMBROSE AND THE WAIF, is Released 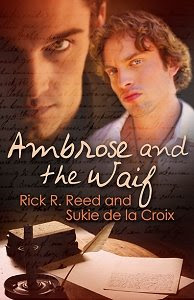 This week marks the release date of my latest ebook, Ambrose and the Waif, and a return to the gruesome horror that got me compared to the likes of Stephen King. Co-written with Chicago journalist and historian Sukie de la Croix, the story is a gothic, over-the-top horror tale about a pair of star-crossed lovers, separated by distance and the overbearing (and overweight) domestic partner of one of them. It's a fast read, only 12,000 words and written in the form of letters that chart a course of love and a deadly game of cat and mouse. It's not for the squeamish and it ain't no heartwarming Christmas story either!

You can buy yourself a copy of Ambrose and the Waif for a measly $3.00 at the publisher's website.

Ambrose loves his waif. But the waif, a handsome young man, has murder on his mind—a convenient solution for getting rid of his overweight partner who uses his girth and his influence to stand in the way of the pair's love for one another. In this twisted tale, played out in letters between Ambrose and his waif, we get a glimpse into the bizarrely romantic lives of the world's most original lovers. Their love is founded on mutual hate, deceit, and a prurient longing for the other seldom seen in gay fiction.

What's true and what's false in the brooding, fantastical letters the pair pens to one another? Not even they are certain as they plot murder, plan escape to exotic, far-off lands, and confound one another with psychological mind games. As you hungrily press through pages, you, too, will be confounded as you think you know what's happening, only to have your beliefs reversed, set back on course again, and perhaps even striking off in entirely new and unexpected directions.

What is certain is that you will never be sure of the fate of Ambrose and the Waif until you get to its final, breathless conclusion.

And a little taste:

...And so he is gone. And so the deathly veil that once lay draped across our love has been lifted, and returned to its rightful owner. May that apprentice of the Devil rot alone in that precious New England soil for all eternity.

When I return from my travels we will dance naked upon his grave in the moonlight, celebrate like crapulent dryads as we stamp our feet and send his wicked soul even deeper into hell. As if hell were deep enough for him. As if there were a place in this world, or any other world, that would give refuge to that monstrous being.

You have done well, my tiny elfin creature. Eliminating him was the only way. He never would have released you from his prison.

I well remember the day that I first saw you. You were sitting alone on the wharf, a fishing boat had moored nearby, and you were, I assumed at the time, staring at the fishermen struggling with their nets. At first I thought you were an angel; the sun was behind you, your white, loose-fitting clothes—like sacrificial robes—the gentle breath of the wind running like children through your soft golden curls. You kept brushing them back, away from your eyes.

Then I walked around you, stood between you and the glaring sun. That's when I saw the bruises on your face, the vacant look in your eyes, and that terrible mark, that evil tattoo upon your forearm. The mark of ownership. What were you thinking about that day? You never told me, but then I've never asked you.

Oh, how my body aches for you. How I long to kneel at your feet and drink from the sacred cup of my waif; to kiss those hands, once manacled to the wall of that dark dungeon. My heart is torn apart when I think of what that beast did to you.

But all that is gone now. The torture is over, and soon I will be loving you as you deserve to be loved; as a writer loves his muse, as an artist loves the gift that God has given him.

Yes, my sweet waif, his bedroom will become my studio. You must now take everything from the room and burn it in the garden. He must be exorcised. Then, when I return, I will paint you; though capturing your beauty in oils will not be an easy task. Perhaps I will first paint an arm on one canvas, then your other arm on another canvas, then your chest, until I have many parts of you, that I can assemble as a wall. I will be driven insane by this whimsy!

But first, as I told you the last time we were together, on that secluded pebble beach, I cannot be with you until I visit Morocco. I have been summoned to paint the Master Musicians from the remote village of Jajouka. I board the ship tomorrow.

I love you more than you can ever know...

BUY Ambrose and the Waif