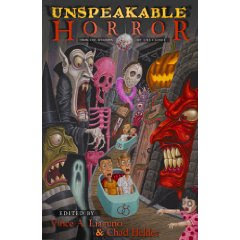 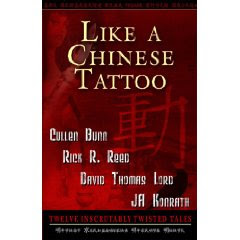 When the Bram Stoker Award finalists were announced the other day, I couldn't have been more pleased. Although I share the credit with a passel of other fine writers, two of the anthologies that featured my work in 2008 were named finalists for the most prestigious award in horror literature. And that's out of only four finalists in the "Superior Achievement in an Anthology" category.

The two books are Like a Chinese Tattoo, edited by Bill Breedlove (and featuring three of my short stories, along with the twisted work of Cullen Bunn, David Thomas Lord, and JA Konrath) and Unspeakable Horror: From the Shadows of the Closet, edited by Vince Liaguno and Chad Helder (and boasting the talents of Kealen Patrick Burke, Sarah Langan, and many others, including yours truly). Unspeakable Horror is a groundbreaking collection of queer horror, and I'm so happy to see it make the final cut.

Winners will be announced in June in Los Angeles. I am very proud to have been a part of these two collections and have everything I can possibly cross that one, or both, will take the prize. Hey, a tie could happen, right?

Meanwhile, why not pick up your own copy of one of the nominated books and give yourself hours of reading terror:

Click here to purchase Unspeakable Horror: From the Shadows of the Closet

Here's a little sample from my story, "Sublet" which was in Unspeakable Horror: From the Shadows of the Closet:


And then the boy moved, walking in a kind of lazy, jerking fashion across the floor to the other side of the room. He reached up to some bricks in the wall and it looked as if he were trying to move them. He turned then and looked at Ian with such a plaintive, woeful stare that Ian was shocked by the emotion he suddenly felt: sympathy. There was anguish in the boy’s gaze as he ran his hands ran over the bricks.

And then the boy was rushing toward him and Ian was so terrified, he squeezed his eyes together, collapsing back against the bed, and curled into a fetal position, waiting for the touch of the stranger.

But there was no touch. Ian lay still, every muscle tight, in the little ball for what seemed like hours, but was, he realized, only minutes. Slowly, his breathing returned to normal and he allowed his body to uncurl, to relax the muscles a tiny bit. He allowed himself finally to open his eyes.

And the room was empty.

And a taste of "Moving Toward the Light" one of three stories featured in Like a Chinese Tattoo:

There is only darkness. She blinks, trying to focus, but the black presses in: a warm presence, engulfing, suffocating. She reaches out, wondering if she is floating in a vast, starless sky...and her hands connect with wood. Reaches up...and her hands connect with wood. Hard wood, she realizes now, supports her back. She takes in a great quivering breath, wondering how much air is left for her. This is too unreal, she tells herself and once more reaches around herself, fingers groping like subterranean insects, sensing only by touch.

The box in which she has been trapped is little bigger than she is. At best, there is only a few inches on either side of her, above her. Before the panic sets in, she touches the holes drilled in the top of the box.
Posted by Rick R. Reed at 9:04 PM