All About My Father 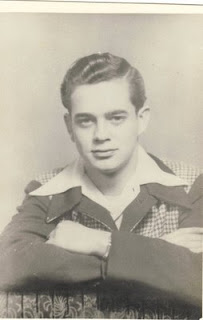 Okay, this blog is not going to be about books or new releases or reviews or awards or anything related to literature, my own or anyone else's. Maybe. This blog is about my life, and the reason I say "maybe" is who knows what shapes us as writers or artists in general?

Anyway, I'm not much for philosophical discussions. I wanted to talk to you about having a perfect Sunday the other day with my honey, which wound up with relaxing in front of the TV watching a movie from Netflix: ELEGY, with Ben Kingsley and Penelope Cruz. No, this blog is not a movie review either, although we both liked the movie and found it very rewarding by the end.

The reason I mention all the above is because, like good art should do, ELEGY touched me on a deeply personal level. And it wasn't necessarily about the major themes of love, loss, and commitment that the movie is about, but about the side story to the movie: the relationship of Ben Kingsley's character (a selfish, egotistical writer) with his adult son.

That relationship reminded me a lot of the anguish I experienced growing up with a father who was a perfectionist, selfish, and, in no way, shape, or form, a family man. While the details differ markedly, the father-son relationship at the core of the movie was so like the one I had with my own father that I am still thinking about it today, three days later.

See, Ben Kingsley's son in the movie is furious with Ben for leaving the family when he was still a boy. He has never gotten over this rage he holds toward his father and is literally blinded by it. He cannot forgive his father for abandoning him and his mother...and it's coloring his own relationships as an adult (relationships that are eerily veering off in directions very similar to his own father's failings and shortcomings). I understood the son. Even though my father never divorced my mother (but, oh, how often I wished he would have!), he was emotionally distant and thought so much about himself that he never made much of a connection with our family.

And, like the son in ELEGY, I could never forgive my father for this. Growing up, I had recurring dreams where I would scream at him, saying all the things I never dared speak aloud. And I too felt cheated by life and furious at not getting the father I thought I deserved.

But there is a short scene in ELEGY that economically revealed a shift in the movie's father and son relationship. Ben and his son are in a coffee shop and the son is giving Ben the same old shit about being worthless as his dad, when Ben suddenly gets up and says they will have to talk later, that he has an appointment. The son is outraged and thinks at first this is par for the course. His father has never been there for him before, so why should today be any different. He challenges his father, wondering underneath his words: what could be more important than your son, sitting here before you with a problem? But then Ben tells him the appointment: his best friend has died and he has to hurry off to make the funeral. The son is taken aback and you can see the shift in his perception of his father in that moment. What he sees is not the father he was denied, but a human being, in pain. That moment, the son turned a corner.

My own corner turning was not as dramatic. It took me many years to realize what the movie son realized in a dramatic instant: that my dad, for all his failings, was NOT put on this earth simply to fulfill my yearning for a good father, but was simply, like me, a human being. I didn't stop thinking my father wasn't a good dad, but I did realize well into my adulthood, that my father was just another human being. With limitations.

And when I realized that, well into my thirties actually, I could begin to love him. Maybe not as a father. But as a person. Like the son in the movie, I finally came to understand that the only way I would ever have any kind of relationship with my dad was to accept him as he was, and stop wishing for him to be something he never could.

After this realization, I began to have a kind of relationship with him, more than I ever had. I won't say it was great or life-changing, but it was honest and real. I often wonder about the timing of my own realization, though, because it was only a few years later that Dad dropped dead of a heart attack one morning in the bathroom.

And I cried at his funeral, something I thought, through most of my life, I would never be able to do.
Posted by Rick R. Reed at 8:23 AM