Talk About Being Scared Sh%@less! 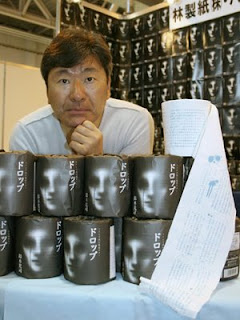 Hey, I'm a big fan of Japanese horror, and especially of THE RING trilogy by Koji Suzuki. The movies, both Japanese and American versions, were pretty cool, but you really must experience the books to get the full effect of Suzuki's horror genius. He's been called the "Stephen King of Japan." Hmmm...

Anyway, I just about crapped in my pants when I saw the brilliant idea Suzuki and his publisher have just come up with for his latest novel, The Drop. The book is printed on a roll of toilet paper to expedite bathroom reading, to come in handy at particularly gruesome moments, and to complement the story, which is set in a public restroom.

I searched in vain for a copy of The Drop (which retails in Japan for around $2.20) because, man, I was ready to buy. But it appears American retailers have yet to embrace this brilliant concept.

But I won't give up. I have long held that people who read while on the toilet are crass and disrespectful, but The Drop just might change my mind.

From Yahoo News:
"TOKYO – In a country where ghosts are traditionally believed to hide in the loo, a Japanese company is advertising a new literary experience — a horror story printed on toilet paper.

Each roll carries several copies of a new nine-chapter novella written by Koji Suzuki, the Japanese author of the horror story “Ring,” which has been made into movies in both Japan and Hollywood.

“Drop,” set in a public restroom, takes up about three feet (90 centimeters) of a roll and can be read in just a few minutes, according to the manufacturer, Hayashi Paper.

The company promotes the toilet paper, which will sell for 210 yen ($2.20) a roll, as “a horror experience in the toilet.”

Toilets in Japan were traditionally tucked away in a dark corner of the house due to religious beliefs. Parents would tease children that a hairy hand might pull them down into the dark pool below."