I met with Ed Williams at a local sauna, where we debated over whether he should have that thing on his rump looked at. I told him, "Man, it could be cancer." He told me, "Man, it could be your dinner...if you don't shut your meat hole."

I changed the subject and plied Ed with my 10 Silly Questions. Here are his responses.

1. If you could invite any famous person, dead or alive, for dinner, what would you eat?

Well, it'd be fast food, something like Krystal cheeseburgers, if I were eating with a famous dead person as I imagine their deadness/dankness would get to me pretty quickly. No need for a seven course meal whilst holding your nose, you understand. If I were eating with a famous alive person, it'd be the classic adult film star Kay Parker, and I wouldn't really give a damn what I was eating as long as I could ogle Kay. She jangles all my good stuff!

Ummmm, Ed Williams with a vengeance?

Right now, short-ass questions that make no sense, but I'm getting there. Slick Rick, you are not cut from the wax sandwich personality cloth, that's for sure!

4. If you could have one wish, would you give it to me?

Of course, I'd just wish for anything I wanted anytime I wanted it. Then, I'd toss you a wish for giving me the opportunity in the first place. Make good use of it, cause after that I'd be tossing out multiple wishes involving Atomic Fireballs, Bachman-Turner Overdrive concert tickets, a 51% ownership stake in the company that manufactures Pooter Tooters, and Kay Parker/Honey Wilder/Desiree Cousteau all employed as maids at my coastal Georgia home. And a lifetime supply of Viagra!

If I told you where I'm at, den I'd wanna know where you at. And you ain't said dat. So, no point to give out where I'm at, cause dat's dat, and some would say youse a nosey cat!

6. If you had to choose only one vice, what would it be?

Horniness so intolerable that you'd have to constantly do something about it. Breeding is so basic, everyone understands it, and most everyone enjoys it. Those who say they don't are either lying or shouldn't be allowed to live anyway, so it's all good from what I can see.

7. What’s your favorite brand of cereal?

Captain Crunch, it's truly the Elvis of cereals. Gold, bold, in milk that's cold, it rocks! [RR: Fast Fact: In these interviews, CC has been named far more than any other cereal.]

8. When you wake up in the morning, what celebrity do you most resemble?

A kinda slobby lookin' Rick Reed. My drooling and runny nose is spot on, although I have to admit my hair looks a lot better. [RR: He means Rick Reed, the baseball player.]

9. Do you know your ass from a hole in the ground? And if so, how do you tell the difference?

Of course I do, and here's how I know. If I try to kick the hole in the ground I'll trip and fall over, if I kick my own ass I'll yell. Anyone knows that. 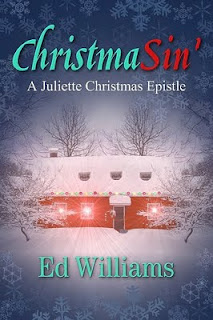 I have a wild azz, Juliette, Georgia country boy Christmas story coming out in November of this year called, "ChristmaSin'". It's basically a Christmas story involving red clay chunk wars, cock fights, and loose women that ends up folded into a Christmas message. Of course, it's told by the seventeen year old version of me, so y'all can just about guess how mature and suave it is. Y'all can visit me at my website or on my publisher's website if you wanna!

Ed says this about Ed: I'm a Southern Outlaw Author, I've had two books published. One was called "Sex, Dead Dogs, and Me: The Juliette Journals," the other was called "Rough As A Cob: More From the Juliette Journals." A story of mine, "Sally the Screamer," recently appeared in the Southern humor anthology, "Southern Fried Farce." I wrote a column called "Free Wheelin'" for several years and have spoken to groups all over the southeast. And, I've just signed a contract for my Christmas novel, "ChristmaSin': A Juliette Christmas Epistle," it's coming out this November. I guess I'm kinda like the Forrest Gump of Literature.
Posted by Rick R. Reed at 1:35 AM