For the Love of Dog

Recently, a friend forwarded on to me an e-mail from his ex-partner, whose beloved canine companion had just passed on. I thought the sentiment was so moving and the writing so evocative and clear that I immediately asked permission to share it with you.

Below is a remembrance from Tyler Godshall of his dog, Wiley. Those of you who now love a dog or have ever loved one will understand completely what this is about.

Here are Tyler's own words about Wiley: 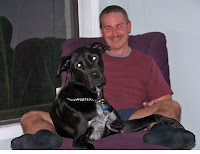 "It wasn’t always that way. When my (now ex-) partner brought him home from the pound in 2004, we already had four cats, two of which were diabetic, and adding a dog to the mix stressed them out. I was ticked.

"My partner named him Wiley. He had been a stray, best guess he was almost a year old, a black lab/pointer mix with a white chest. He wasn’t housebroken, and when he peed on the carpet, I was beside myself. If my partner was determined to have a dog, then he better house-train his dog quickly.

"But Wiley was a master manipulator. The more I tried to keep him at an emotional distance, the more he started to cling to me. When he jumped on the couch and sat next to me, hovering over me with his Pitiful Face with the Sad Brown Eyes staring at me down his hounddog snout, he had begun to weasel his way into my heart. I never knew how much expression a dog could capture in his eyes. I never knew the range of emotion a dog could convey with his face.

"After the breakup, I got custody of Wiley (“You needed him more than I did,” my ex told me recently), and he has become my shadow. Labs tend to be clingy, and Wiley suffers from a lab’s typical separation anxiety. He followed me around our new home constantly (to the point where I debated renaming him “Shadow”), a habit I found both endearing and annoying. If I’m on the couch, he’s lying next to me, with his head on my lap, soaking up the love and affection. If I’m at my desk, he’s curled up underneath. If I’m on the patio, he’s lying on the deck next to me. Even if I’m on the toilet, he is curled up at my feet. No space is too small for this 65-pound loveable mutt to wedge himself into, if it means being close to me.

"Wiley is a great companion to take hiking, and he never strays far. At times when I let him off the leash, he will run ahead until he rounds a curve or loses me from his sight. At that point his separation anxiety kicks in, he panics, and he dashes back to me lickety-split. Sometimes I hide off-trail and watch him run past me, at which point I whistle to get his attention, and of course he’s so happy to see me! And I’ve never seen a dog run as fast as Wiley, he runs for the pure enjoyment of it, and he could give a greyhound a run for its money.

"I had always been a cat person. I thought cats were smart, but none of my cats could hold a candle to Wiley’s intelligence. My back yard butts up to a conservation lot, with a trail from my yard down to a creek. Since Day One, Wiley has always done his business out of the yard and off the trail, going among the ferns and vines and weeds, not once making a deposit in a spot where I would need to pick up after him (unlike my other lab, May, who is a Free-Range Pooper….).

"All dogs pick up on certain key words that get an excited response from them (the term “go somewhere” always triggers the Happy Dance by Wiley), but I shake my head in amazement at some of the things he understands. I swear there are times when I’ve carried on an entire conversation with him, as his reactions and expressions tell me that he understands. One evening, he was sprawled lengthwise across the couch with his head on my lap. I was wedged into the corner of the couch, but got up to go to the kitchen. When I returned and saw there was no room left for me to sit back down, I told Wiley, “Okay, you’re gonna have to move if you want me to sit here again.” At that point he raised his head and twisted his shoulders up and around, just enough to make room for me to sit down, and then he put his head back in my lap so we were in the same position as before I went to the kitchen. I laughed out loud, “How did you know what I said?!! How did you do that?!?” Again and again he has shown an intuition and an understanding that others have noticed and commented on.

"I’m sure it’s a result of my own alone-ness in this world that I give Wiley so many human attributes, especially regarding his endless affection. I have no children, no nieces, no nephews, so of course my pets are probably more important to me than many others’ pets are to them. Wiley has been my Constant, the only piece of stability in my life the last three years as I’ve dealt with the end of two relationships, the passing of two aunts, the loss of two cats, and the stress of having seven jobs in the last three years. Through it all, Wiley has been there to love me and to be loved. He loves body contact, loves to be held, and refuses to be ignored by anyone who walks in the house. I cherish how, when I come home from work, he jumps up with his front paws on my shoulder and greets me with hugs and kisses. (It’s his favorite greeting for the Food Lady next door, too, when she visits him.) I joke about weekend nights turning into “Date Night on the Couch with Wiley” because I realize I enjoy staying home, curled up and cuddled up on the couch with Wiley while watching TV, instead of going out. Often at night, I’ll find him lying in bed with his head on the pillow next to me, spooning him, he on top of the covers, me underneath, both of us enjoying the cuddling.

"He’s had his misadventures as well—getting kicked in the head by a horse (and surviving), getting stung by a swarm of yellow jackets whose nest he inadvertently peed on. And each time I fretted over him like an overprotective parent, because who could NOT feel sorry for the Pitiful Face with the Sad Brown Eyes?

"And then every parent’s nightmare…two months ago, Wiley was diagnosed with bone cancer. Even with a leg amputation and chemo, the cancer was too aggressive and spread quickly into his lungs, cutting down the amount of oxygen his body was getting. And today, the day after Christmas, it was time to say goodbye to the Pitiful Face with the Sad Brown Eyes.

"Wiley’s last two months were some of the best days of his too-short life. He continued to be spoiled and had lots of visitors, he always knew he was loved. He recovered fine from the amputation and just in the last two weeks he enjoyed his three-legged romping on the beach at Ft DeSoto beach twice, and went to his favorite nature preserve on Christmas Eve with his sister May and showed her how to walk calmly through the woods. 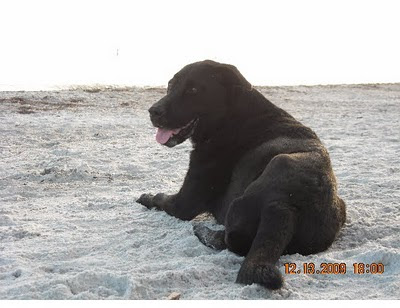 "I would like to believe in reincarnation. I would like to think that someday I’ll be volunteering at the CARES dog rescue shelter, and I’ll say to some new big dog “You wanna go somewhere?” and I’ll get a familiar reaction, and I’ll know my beloved Wiley has come back to me. But until then my heart will ache for my cuddle buddy…my hiking buddy…my camping buddy…for a dog that seemed smarter and wiser than a dog should have been.