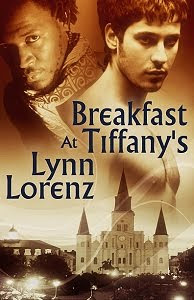 SYNOPSIS
Scott lives in a homeless shelter and Tony is squatting in an abandoned house. Fate and fortune bring them together in a dark alley during a robbery. Tony rescues the younger man from being beaten, but on the edge of desepration himself, he steals Scott's money. Ashamed of his actions, Tony decides to return the cash. Scott sees a kindred soul in the man who saved him, then robbed him. Both are seeking what they’ve lost, love, pride, and family. Together, they decide to create a life together in a city defeated but not destroyed.

Scott trotted down the steps of the homeless shelter, pulled the collar of his threadbare windbreaker up, and headed down St. Joseph Street to Magazine Street. At four in the morning, the street was deserted; all the action would be over on Canal Street, just bordering the French Quarter. His head swiveled back and forth, checking in the shadows of the buildings for signs of life.

Even though he didn’t have more than five dollars on him, he knew there were addicts who would try to take it from you, beat you for it, leave you bleeding, and hurt, just to get their next fix.

As he turned the corner onto Magazine Street and made his way toward the Quarter, he relaxed. The closer he got to it, the better he felt. In the Quarter, with its around the clock nightlife, bars, restaurants and tourists, he’d be safe, or at least safer than here in the deserted business district where the shelter he lived at was located. He hated being there, but the only other place to live would be on the streets. He’d tried that and he’d been pushed against a concrete pillar, robbed, and raped.

The shelter might smell and the food sucked, but none of the other men bothered him there. None of them assumed they could take his ass whenever they felt like it. Like him, all these men only wanted to be left alone, to lie on a warm cot with a blanket, and to sleep in safety.

Up ahead, the traffic light on the corner of Canal and Magazine shone like a beacon in the darkness. His shoulders eased from riding his ears.

Only three blocks to go.

Tony stood in the shadows of the alley between the two buildings and watched the skinny white kid walk down the street. Head down, jacket zipped up to his chin and collar up against the dampness of the early morning, the guy made his way down the street, in and out of the halos cast from streetlights placed just too far apart to make the illumination continuous.

Inhaling, Tony pulled back farther into his hiding spot. His stomach rumbled. Fuck, he hadn’t had a thing to eat in two days and if he didn’t get some cash soon, he’d have to go back to selling his ass on the street. Jobs for people like him were few and far between.

And he’d already promised the memory of his grandmother, embodied in her silver cross around his neck, that he’d never do that again. And no selling drugs. Uh-huh. He was clean and he was gonna stay that way.

Running out of choices, he’d turned to thieving. Grandmama would forgive him that, Tony was sure of it. Which is why he now found himself on the outskirts of the Quarter, looking for someone stupid enough to be walking around down here.

He had to be about eighteen, maybe twenty, but damn, the boy was skinny. Hair so black it looked blue in the lamplights, skin so white it nearly glowed. Skin so white, that next to Tony’s ebony skin, the contrast between them would burn his eyes.

Somewhere a car horn blared and the kid’s head snapped up.

Shit, his eyes were pale too. Almost without color. For a moment, he stared into the spot where Tony hid, but his steps never faltered. Then he dropped his head, dug his hands deeper into the jacket’s pockets, and kept going.

Booking for the Quarter.

Maybe one of those rent boys on his way to earn a little cash in the clubs.

Maybe he had a little cash on him right now.

Maybe if Tony moved fast, when the kid passed him, he could just reach out, grab him, and drag him into the alley. Tony easily had size and muscles over him. It’d be no problem.

The kid passed him.

The scent of soap and something else filled Tony’s nose, stirring a memory from long ago deep inside him. When he had a home, a momma who gave a shit, and two little brothers and a baby sister to care about.

Everything he’d lost in Katrina.

Tony struggled with the wave of grief washing over him, making his knees buckle and his gut ache even harder.

The guy continued on down the block.

A soft sniff broke the silence.

Scott swallowed and his ears pricked up. It had come from behind him, he was sure of it. He pulled his hands out of his jacket, fisted them, ready, just in case. As he strained to hear any sound other than his own footfalls, he never saw the hand reaching out from the alley he’d passed, grabbing him by the neck, and yanking him to the side.

He cried out, his own fists flying blindly, but another harder, bigger fist smashed into the side of his head, shooting pain and a warning to shut the fuck up or he’d get worse.

Strong hands cupped under his armpits, dragged him into the darkness of a narrow space between buildings, and dumped him like a bag of garbage on the cold damp concrete.

Fuck. He’d almost made it to Canal.