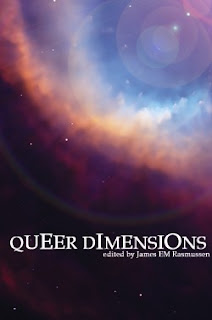 Ever been to Queer Dimensions? No, it's not the Twilight Zone. Author Fiona Glass gives us a tour.


Synopsis:
Can love follow a man through time? Madoc, a dock-worker who's doubly cursed as 'non Caste' and gay, meets Josh, a man he comes to realize is visiting from the future. What he doesn't realize is that he'll spend much of his life following Josh through time, or that Josh's visit will be the catalyst for him to change his unfair world.
'The Visitor', a poignant time-travel romance, is available in 'Queer Dimensions', a collection of seventeen beautiful sci-fi stories published by QueeredFiction. It's available in both print and electronic versions and you can find all the purchase details at their website.
Excerpt:
The man had come off the latest travel-ship, but whether he was from the past or the future Madoc was too lowly to be told. The first he knew of it was when the man appeared on the docks, which was unusual enough in itself. Travellers were bustled through the quayside as quickly and painlessly as possible, not left to wander the wet foul-smelling slabs by themselves - but this man had clearly lost his way.
In spite of the travelling clothes he was wearing he had the pallid skin and dark eyes of a caste member and Madoc was wary about approaching him. Non-castes didn't speak to castes without an invitation, or a bloody good reason to do so. The man would no doubt find his own way without Madoc's very limited help. But the man had other ideas. Approaching the spot where Madoc stood ticking off boxes on his latest list, he had his mouth open to say something - to ask for directions, perhaps, or yell at Madoc for not moving out of the way. Whatever it was, Madoc never knew, because at the last minute the man tripped over an unseen box on the quay and swooped arse-over-elbow into the greasy waters below.
Madoc didn't even stop to think. That was a caste member floundering down there, and he didn't want the death laid at his door. Kicking off his boots and casting his manifest aside he leapt into the sea in his turn, paddling to where the man lay and holding his head aloft until help arrived.
The man was grateful, he'd give him that. Standing dripping on the dock he ignored the other offers of help to seek Madoc out and even shake his hand. "My name's Josh," he said, wiping weed off his face with a rueful grin. "And I'm very grateful to you for coming to the rescue - I can swim but that water's very cold."
"It's nothing," said Madoc with a shrug. And then, because he'd fallen for the man's smile, he cast danger to the winds. "Would you like to come back to my place to dry off? It's not far, just over there by the dock gate."
"Thanks, that would be good," said Josh. "But I can't stay long. I'm just visiting, you see."