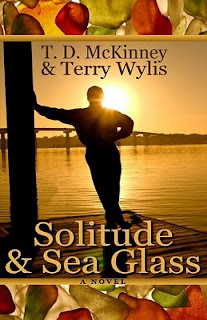 Today's Spotlight is for Solitude and Sea Glass, two of my favorite things (along with raindrops on roses and whiskers on kittens). Below, the authors share a tantalizing synopsis and excerpt.


Since his discovery as a child star by a big Hollywood studio, Holland Faust has known he has no value beyond his pretty face.  When a crazed fan with a knife ended his acting career, he withdrew to a secluded island off the coast of Maine.  There he remains locked away, his solitary existence lightened only by his dog, his garden, and the rare sea glass washed up on shore, communicating only with his two estate keepers and his agent.  Without his legendary face, what does he have to offer anyone?  Especially someone as vital and beautiful as Ruby Keagan. The young man mistakenly hired as his personal assistant for the summer is the last thing Holland's fragile self-image needs.
Ruby never really thought about his teenage crush on Holland Faust.  The poster on his wall had become nothing more than a memory until Ruby took a summer internship for the Faust Charitable Foundation.  Hol far exceeds those youthful daydreams; a sensitive, caring man who deserves so much more than his lonely existence.  Now if Ruby can just get Hol to realize he doesn't need to hide any longer.

Oh my God. What have I done? The heat of Ruby’s smile washed over Holland, its glory blinding him for an instant. From six inches away, the combination of that smile and those eyes ripped Holland’s cognitive functions away.
This! This was why he didn’t have male assistants. He’d not the least wish to become the sort of user this unbelievably appealing creature had just accused him of being. The women would never tempt him. But Ruby...dear lord. Pure temptation. Hol managed to pull back before he said or did something to show how very much he wanted to kiss that smiling mouth.
“Your office and quarters are downstairs.” There, that sounded reasonable and not half as shaky as his knees felt.
“Fair enough.” Ruby stood, the movement shifting the robe just enough to reveal a glimpse of smooth, well-muscled chest before the younger man tightened the belt again. “Hope you don’t mind if I keep this a little longer...and showing me where the dryer is, for my clothes?”
“There’s a laundry off the kitchen.” Even now, Ruby seemed far too close. “I’ll go down with the cart and get your luggage so you’ll have fresh clothes.” And he was not thinking of following the fine column of Ruby’s throat down and pressing his lips to the sweet hollow just above the creamy velvet opening of his robe.
Surprise lifted dark brows. Those decadent eyes studied him, too bright, too...everything. “That’s nice. Thank you.” Ruby held out his hand. “And thank you, Mr. Faust, for giving me a chance to prove myself. You won’t regret it.”
Pure electric shock ran up Holland’s arm the instant their hands touched. Ruby’s firm handshake matched his straightforward manner. And his upbringing. Holland knew a hill man didn’t offer his hand unless he meant it. His father had told him so many times. “I hope I don’t, Mr. Keagan.” He could hardly say he already did so. He moved to show his visitor out of the bedroom. And further from temptation.