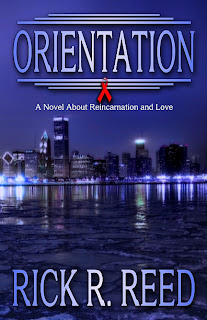 . This is the book that took home the award for best GLBT Novel of 2008 from the EPIC Awards and is about a unique relationship between a gay man and the lesbian he saves from suicide (who may or may not be his reincarnated lover, who died from AIDS during the early 1980s).

Christmas, 1983: A young man, Robert, tends to his soul mate, Keith, who is dying from AIDS. Robert tries valiantly to make this a special Christmas for his lover, but loses the fight late Christmas night.

Christmas, 2007: Robert ventures out late Christmas night and finds a young girl about to fling herself into the unforgiving waters of Lake Michigan. He rescues her, and the two form a bond forged from an odd feeling they share of familiarity, and even love. Neither understands it, since Jess is a lesbian and Robert has never been attracted to women. But there’s more...Jess begins having strange dreams, reliving key moments she couldn’t know about in Keith and Robert’s life and courtship. Robert and Jess begin to wonder if their inexplicable feelings might be rooted in something much more mystical than a savior/victim relationship.

As the two move toward and pull away from each other, Ethan, Robert’s younger lover, plots the unthinkable. His crystal meth-addled mind becomes convinced there’s only one way to save himself, and that is through Robert’s destruction. Christmas 2007 spirals downward to a shattering climax in which both love and lives hang in the balance.

Page 60:
And if he could just get there, he could get back in touch with himself again, maybe even write about his experiences and become another Augusten Burroughs. Wouldn’t that be ironic? Robert seemed to attract the literary types! And Ethan had always wanted to write.

But he knew that once he finished rehab (if he even could), he would not come back to Robert. He would not even come back to Chicago. Too much temptation here. He would be back on the phone with Tony within days, maybe hours. He knew himself that well. To resist temptation, he needed to remove himself completely from it.

He stood and realized he needed to money and lots of it. Suddenly, the answer to all of his problems surfaced in the image of dollar signs. He wondered how much longer Robert would be gone.

Ethan hurried to the front door and pulled the chain lock across it. This way, he would at least have some warning should Robert come home before he was done looking around in his office. He was sure Robert kept financial statements and stuff like that in his desk file drawer, lower left-hand side. He had never been interested enough to look before, never caring about Robert’s net worth, as long as he paid Ethan’s American Express bill at the end of each month and doled out hundred dollar bills whenever Ethan asked.

Ethan didn’t know anything about Robert’s assets, or how liquid they could be. He didn’t know yet what he would need to do to lay his hand on a sizable chunk of money without Robert knowing, at least not until he was gone and hidden away in a rehab facility. But once he knew how much could be withdrawn at once, he could begin to formulate a plan.

Did he hate to do this to Robert? He was too exhausted to feel remorse. He told himself, over and over, the old saw: desperate times call for desperate measures. It was rationalization enough to go into the den off the living room and stoop to the file drawer of Robert’s desk. It was locked, but that was easy enough to remedy: three or four minutes of fiddling around with a bent paper clip and the lock sprung open.

And as the drawer opened, Ethan saw before him the keys to his redemption. Robert’s financial records, including holdings, stocks, bonds, mutual funds, tax reports, and more were all neatly cataloged in hanging green folders, labeled with dates and account numbers. This was going to be a cinch! At least finding the information would not pose a major problem. Armed with information, he could figure out a way to get to the funds he needed.

He was just beginning to rifle through the files when two folders near the back caught his eye. One was labeled “Last Will and Testament” and the other, simply, “Insurance.”

Ethan pulled both folders out and sat down on the floor with them.