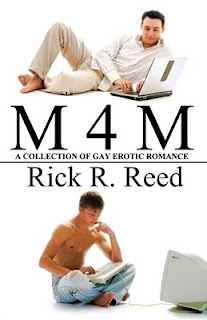 into the paperback collection, M4M

Synopsis
Two great stories. One great love. Get between the covers with Ethan and Brian, the men whose hearts connected online and offline in the best-selling VGL Male Seeks Same

. Follow them on their continuing journey in NEG UB2

, where a shocking health diagnosis derails the couple’s blissful romance and teaches them both a lot about acceptance, forgiveness, and faith...especially when it comes to love.

Poor Ethan Schwartz. It seems like he will never find that special someone. At age 42, he’s still alone, his bed still empty, and his 42-inch HDTV overworked. He’s tried the bars and other places where gay men are supposed to find one another, but for Ethan, it never works out. He wonders if it ever will. Should he get a cat? But all of that is about to change. At work, Ethan hears about a website that promises to deliver more than just the tawdry hook-ups associated with so many other sites. Ethan wants romance, and although he’s always been a little shy about the whole cyber-dating scene, he figures he has nothing to lose. Well, maybe he does have something to lose: his self-esteem. After he posts his profile, he gets zero responses. But Ethan realizes one thing about the cyberworld that isn’t true in the real one: Online, Ethan can be anyone he wants to be. And a new persona is born. The new Ethan is handsome (with someone else’s pic) and the sudden recipient of dozens of online come-ons. What Ethan doesn't count on, however, is finding—among the propositions and the flattery—his one true love. Not just a gorgeous man, but one who suits him in almost every way. How does Ethan turn his budding cyber love into a real one? And can he hang on to his mystery suitor without turning him off with his deception?

Poor Ethan Schwartz. He’s just had the most shocking news a gay man can get—he’s been diagnosed HIV positive. Up until today, he thought his life was on a perfect course. He had a job he loved and something else he thought he’d never have: Brian, a new man, one whom Ethan thought of as “the one.” The one who would complete him, who would take his life from a lonely existence to a place filled with laughter, hot sex, and romance. But along with the fateful diagnosis comes another shock—who is this new love? Had Ethan ever really known Brian? And did Brian infect him? As Ethan says, his love history had been more of a haiku than an epic and Brian seems the likely culprit in his newfound diagnosis. The course of true love never runs smoothly, right? And for Ethan and Brian, their new love, once so bright and shining, now appears tinged with darkness and deceit. Can they face this hurdle together with honesty and forgiveness? Or will this revelation tear them apart? Ethan turns to creating a blog, Off to See the Wizard of Poz, to help him deal with his diagnosis and love troubles, and what he finds there just may be more hope and support in the world than he once believed. And one of his blog readers just might have the key to Ethan’s happily ever after.

Page 60
Ethan held up a hand. “Stop. I can’t deal with this right now. You know? I need to process this.” And with no regard about being rude or a melodramatic queen, he stood and rushed from the doctor’s office, not looking back to what he could only imagine was a very stunned physician.

In fact, as he got the reception area door, he heard Frank Morris call from behind him. “Don’t rush off! I need to talk to you.”

Without looking back, Ethan said, “I’ll call you.” And he dashed out the door.

There were people waiting for the elevator in the corridor. What ailments were they suffering from? Common cold? Gingivitis (a dentist plied her trade at the opposite end of the corridor)? Mumps?
Suddenly, the whole world looked healthy to Ethan Schwartz. And just as suddenly, he felt completely alone. He bypassed the elevator and headed for the stairs, rushing heedlessly down them and almost twisting his ankle in the process.

* * *
Ethan sat in his Halsted Street studio as the wan light of an afternoon sunset filtered in. He recalled the nausea and near hysteria he felt as he charged through the revolving doors of his doctor’s office in the Loop, out into the sickeningly warm Indian Summer day. Wabash Avenue was all bustle and excitement: crowds, traffic, el trains rumbling by overhead. Again, Ethan felt surrounded by rosy-cheeked, hearty, robust specimens of human health and fitness. A young mother licked an ice cream cone while pushing a double baby stroller with adorable twins inside. Nearby a young college lad bit into an apple and read a book as he sat on a bench. Two joggers rushed by, vigorous and full of vim.

It was a world from which Ethan suddenly felt excluded. Worse, it was a world that didn’t know about and didn’t care about the horrible news he had just been given. How could he blame these pictures of health for being so craven, so blatantly disregarding their perfectly functioning systems? He even paused to examine some of the faces rushing by him, hoping to catch a sympathetic eye or an understanding smile, but they all hurried by him, getting on with the heady business of life.

It’s not like they know, Ethan, what do you expect? You don’t look like you’re HIV positive, and even if you did, why should these masses of strangers care about your diagnosis?

Buy a copy of M4M