I was kind of stunned to see the image below on Facebook this morning. 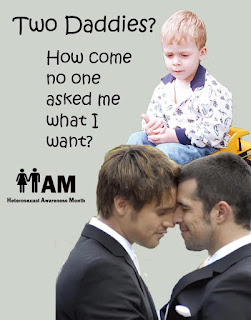 Then, I went into the comments and saw what my son, Nicholas, had written in response to it:

"How come nobody asked me what I want?..." It's clear to me that no one who was involved in the creation of this BS site ever bothered to ask children of gay parents how we feel about it. Well, even though you scrupulously avoided asking (because you knew you probably wouldn't like the answer, and it certainly wouldn't be useful to this campaign of slander), let me tell you, as the son of a gay man. My father is a remarkable man, he's an accomplished artist, he was a caring and involved father and mentor, and I love him. Therefore, I'm glad he was lucky enough to find love and happiness with someone who loves him back and appreciates him. I certainly don't care what that someone has between his legs; that's your PRURIENT AND WHOLLY INAPPROPRIATE CONCERN, and I really wish you'd stop putting it on people like me. You already claim to speak for gay people ("It's a choice," "Every gay relationship is dysfunctional," "No gay person can really be a Christian," etc) is that not enough? Do you need to appropriate the speech of their children too?

His response moved me to tears. Not only did my son demonstrate love and courage, he also demonstrated a willingness to speak out against bigotry and hate. I posted his response on my own Facebook page.

BUT THAT'S NOT THE END OF THE STORY.

Shortly after my post on Facebook went up, someone commented on my page, wondering where my son's post had gone; seemingly, it had disappeared. I looked and sure enough, it was gone. Then I saw this reply from Nicholas on my Facebook page, regarding the whereabouts of his comment:

They deleted my post and banned me from ever posting there again; it took all of an hour. That's why no one asked that kid what he wanted; actual concern for the experiences of the children of gay people might get in the way of using "concern" for us against gay couples.

What kind of example does this set? My son did not write a hate screed; he was not disprespectful. He simply told his truth as he knows it. I wonder why Heterosexual Awareness Month (who ever heard of such a ridiculous concept? What's next? White Awareness Month?) can't take hearing from the actual child of someone who knows first-hand what it's like to have a gay father?

I seldom ask for action, but I hope you'll consider cutting and pasting this blog (attributing it back to this URL, of course) or Tweeting about it and doing a Facebook status update. These lunatics need to be exposed for their hatred, which is really, very sad. I also encourage you to bombard them with comments on their page, shaming them. I wanted to say ask Facebook to remove them on the grounds of hate speech, but as a champion of free speech, I can't do that. Here's the URL to the Heterosexual Awareness Page: http://www.facebook.com/HeteroAwarenessMonth