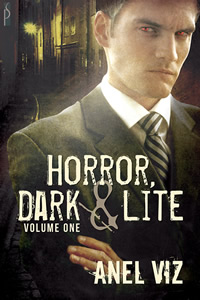 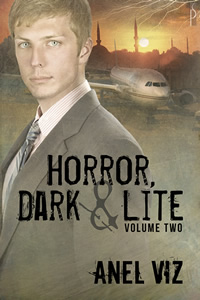 It's easy to find gay romance these days, but gay horror is a bit harder to find, secreting itself away in the shadows, sometimes only coming out when night falls. This is why I think it's cause for rejoicing when an established author whose work I respect comes out with not one, but two horror collections (both from Silver Press, buy links below).

Anel Viz's horror falls into two categories. Me being me, I preferred the darker of the two, the one you need to read with the lights on and that will have you double checking that your doors and windows are locked before you toddle off to bed, where the residue of reading Viz's dark collection will keep you tossing and turning or plunge you headfirst into nightmare territory.

But Viz's horror is not inaccessible if you are of a more lighthearted bent. His other collection is more like a roller coaster ride--thrilling, but crazy fun.

Find out more about Anel Viz and his work here.

Dark Horror:
The vampires, serial killers and shape-shifters in these three novellas will drain the blood from your heart.  Where it goes from there is no one’s business but your own.
“Val” – For years, Brad has been obsessed with the memory of his dead lover, Val. His obsession takes over his life when he meets another Val, a hustler who looks exactly like the first.
“Slasher” – A man is found in a cubicle at a gay bathhouse with his throat slit. Then another victim turns up. Only Lou’s lover, Jamie, can identify the most likely suspect.
“The Matador” – Soledad de Riquer feels certain that her brother, the celebrated matador El Valiente, has his eye on her young boyfriend, Adulio.

Horror Lite
The vampires, stalkers, aliens, and shape-shifters in these stories prove less threatening than the main characters feared.
“A Layover at Atatürk International” – When their plane is delayed, Chase looks forward to sharing a hotel room with fellow passenger Viet Bloedrank.
“Coffee and Aftershave” – Skyler discovers that the creepy individual who followed him home from the subway is also stalking the men he dates.
“Bryce Olson is Pregnant” – Hoping for benefits, Russell decides to play along when Bryce Olson gets it into his head that his ex- boyfriend is an alien.
“The Stray” – John thought it just coincidence that his housemate and the big grey dog that came by for handouts never crossed paths.  How long would it take him to catch on?


An Interview with Anel Viz

RR: My own writing is shifting from horror to romance, you seem to be headed in the opposite direction with your new releases. What compelled you to dip your toes in the dark, murky waters of horror (where you can't see the bottom and menacing phantoms lurk)?

AV: As far as I know, I’m not shifting to horror; none of my WIPs are horror stories at the moment. I just felt like writing something for Halloween. That, and to do something different. As the reviewer of Horror, Dark & Lite says of me in Wilde Oats: “Someday this reviewer will find a predictable story in a Viz work, then will examine the book to discover that the cover has the author’s name incorrect.” Also, the first story in Dark Horror and the last in Horror, Lite are revisions of two of my earliest publications, and my gang rape story (“The Fire Eaters” in Wilde Oats, April 2009)is darker and more violent than anything in the collection. Nor am I moving away from romance, since I’ve never really been there or done that. At least, I don’t think I’ve written any m/m romances, and certainly not traditional ones. Every reviewer has made the same point. Sure, most of my books contain love stories, but half the time the love story isn’t at the center of the work, which focuses instead on some other issue central to the lives of gay men. And when the story is a love story, it doesn’t conform to the usual romance pattern. For example, I have a love story coming out in the Silver M/M Anthology this January. The lovers have been together for two years when it opens, the problems they face together do not put their relationship at risk, it ends with them having survived the last crisis neither more nor less happy than they were before, and it’s clear they’ll have to face many similar crises in the years to come. The story is called “A Return to Normalcy.”

To return to my horror anthology, I didn’t want to do something different must by writing horror stories, I wanted to write horror stories that were different. Every one of them is a kind of genre experiment , though not nearly as outrageous experiment as my novel New Lives. It doesn’t matter if the vampires in “Val” (if there are any) are actually vampires; instead, vampirism is a metaphor for sexual obsessions and domination. The story is very much about sex, and I use the sex scenes not to advance the plot or reveal something about the characters, but to tell the story. As they (the lovers or the sex scenes—take your pick) pile one on top of the other, we see what’s happening in the story through how the scene differs from the one that came before and the one that follows. “Slasher”, like “Photographic Memories” in Kaleidoscope, is an homage to Alfred Hitchcock, but the solution to the mystery isn’t a solution. And one could as easily remove the shifter from “The Matador” and still have a story as one could remove the love stories from almost any of my other books and still have a book.

The stories in the “lite” volume stories follow the same order as the “dark” novellas: vampire, stalker/investigation (“Slasher” is both), shifter. “A Layover at Atatürk International” is based on something that actually happened to me, except I was stuck in Paris and my roommate was neither gay nor bloodthirsty. The stalker in “Coffee and Aftershave” is a real stalker, but the men he stalks all react to him differently: some freak out completely, others blow him off. Not until the end of “Bryce Olson is Pregnant” do we learn if the aliens are really aliens, and while the reader knows that the werewolves in “The Stray” are werewolves, the narrator does not. Also, each story draws on a different type of humor. In one I aim to provoke a smile, giggles in another, a belly laugh, a chuckle.

RR: What do you hope to accomplish with these releases, both personally and with your readers?
AV: Personally? Immortality, perhaps. With my readers—well, I’d like to attract more of them, so if horror fans like what I’ve done, maybe they’ll give my other works a try. Being a basically shy person, I do a pretty lousy job when it comes to promoting myself, but the few readers I do have quickly became fans once they’d read me. It’s the initial self-sale that’s so hard to land. I could never be a real estate agent.

RR: What scares YOU?
AV: Well, just imagining how those three letters in caps sound in your mouth is pretty damn scary. It sounds like an accusation and brings my inner guilt to the surface. Ever since I moved to a none-too-large town in the Midwest move than half a lifetime ago, I’m always afraid that what I’ve said has offended someone. You see, my personality was formed by growing up in New York and many years living in France, so I can’t help but speak my mind, and when it disagrees with what they think, a lot of people here take my words as some sort of criticism. It isn’t; it’s just my opinion. There isn’t a judgmental bone in my body. Why anyone would add to the statement “I didn’t like that movie” something like “and since you do, you must be an idiot” is beyond me. Unless, of course, they’re thinking, “You must be an idiot if you don’t.” But if they think I’m an idiot, why should they care what I say? So no caps, please. I may be brash, but I’m very sensitive.

But that’s not you meant, is it? There isn’t much that does frighten me. I’ve been shot at (by accident), mugged, in a plane that caught fire shortly after takeoff, searched and interrogated by the KGB in the Moscow airport (briefly, I’m happy to say), had a bookcase fall on top of me while I slept, diagnosed with cancer, etc. And I wouldn’t give a rat’s ass if the world ended on December 12th. When I was living in Africa, I came around a bend in the road and almost drove my moped straight into a herd of elephants. Didn’t faze me. Luckily, it didn’t faze them either. Let’s see what else… Oh yes, I was briefly terrified that the Republican might sweep the last elections. I don’t consider myself particularly brave; it’s more like an adrenaline deficiency.