Although the post below was written a while back and it was about my very own life, this post could have well been written by the main character, Bobby, in my latest release, Raining Men. Bobby is a man who has searched for love his whole life and never found it, even though his sexual encounters have been remarkably numerous. And I guess that’s the central theme to the book: it’s easy to do sex, but not so much when it comes to love…. 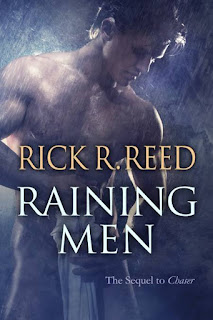 Why, I can remember a time when sex parties and the filthy backrooms of leather bars were the height of sexual euphoria. Coupling with strangers en masse set my heart to racing, my blood to pumping, and my brain to disengage. Out the window went fears of AIDS, STDs, and even the limitations of the human lumbar system as I swam through the darkness like a hungry fish, searching with eyes glazed for the next cock, mouth, or ass.

But all of that stuff seems to have lost its charm, to be replaced by gasp! if not romance, then at least human connection. Maybe it’s not age. Maybe I’m just jaded. Maybe I’ve grown wiser. But these days, sex seems hotter when it’s one on one, with someone I actually know more about than the fact that he’s able to swing that baseball cap around effortlessly, inhale a bottle of poppers, and blow me all at the same time. I get more aroused in my own bed, waiting for someone whose name, occupation, and likes and dislikes I at least have a rudimentary knowledge of, than I used to lining up for a crack at the crack in the sling.

A couple cases in point. Old habits die hard, which is why I readily accepted an invitation to a party held International Mr. Leather (IML) weekend in one of the rooms of the host hotel, the Hyatt. There were to be about fifteen guys gathered. And there would be no chips and salsa, witty repartee, or flirtatious glances across the room. No, we all knew what we were there for. The only party favors supplied were bottles of various lube (even that new sensation J Lube, which bears no relation to J Lo, except that both might or might not have something to do with big asses, but I digress), poppers, a sling set up in one corner of the room, and a portable enema hose in the bathroom’s shower. There was no music. No conversation. Just naked men (and some pretty hot ones), grunts, groans, and the odd operatic aria (Sweet Mystery of Life, I Adore You). After about an hour or so, and making the corporeal acquaintance of at least five other men, the whole thing seemed rather amusing and well, a little boring. So I left, even though the partiers had hours to go before they slept. Trying to get my clothes back on amidst a tableau out of something Fellini might have dreamed up was no easy task. Picking my way to the door through the sweaty bodies almost made me giggle…it was like playing a very grown up game of Twister.

Contrast that with Sunday…and a very nice day at the beach with someone whom I’m getting to know on many levels. Contrast the sex party with just the two of us, in my sun-drenched bedroom, pretty much doing what the guys at the sex party were doing, but instead of looking for who we should fuck next, we stared into each other’s eyes, charting the course of each other’s pleasure.

What’s happened to me? Does this mean I’ve finally grown up? Or am I just getting boring?